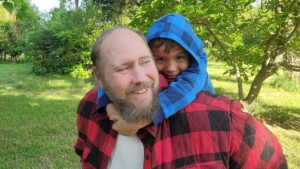 Granted, that “era” has only been going on since 2016 or thereabouts, but it seems like so much longer! And maybe that’s because, over the past seven years, VANCE MAJOR (Owen is his middle name) has produced and released a total of 146(!!!) Star Trek fan films featuring his character of Erick Minard (in all its many iterations!) as well as a bevy of recurring characters, cameos by a who’s who of other fan filmmakers (including myself), and even his own 5-year-old son Royce…who has been appearing in Vance’s films literally since infancy.

And that doesn’t include Vance’s appearances in other fan series like STARSHIP VALIANT and THE AVALON UNIVERSE. Vance has been a staple of our fan film community this entire time, and his parade of new releases—sometimes coming almost weekly!—provided a recurring reminder that Star Trek fan films come as much from the heart as from the camera.

Of course, Vance’s stuff isn’t to everyone’s taste, and I totally get that. His production budgets are ridiculously humble (like, “Buddy, can ya spare some change?” humble), the quality modest at best, and the acting as likely to be hit as miss. More often than not, there’s limited if any “action,” and the more recent films (especially since COVID) have been little more than a series of interstellar Skype calls as two people have a conversation. “The Best of Both Worlds” or “Sacrifice of Angels” these fan films are most assuredly not!

But what they are, in my opinion, is a form of poetry. Vance presents his thoughts, feelings, observations, perspectives, concerns, triumphs, frustrations, dreams, and passions through his films. Most poets don’t need much more than a pen and paper (or keyboard). For Vance, it also means a camera phone, Starfleet uniform, and video editing software. But the idea and the goal is the same: to share a part of himself with others.

Some of us enjoy that sharing and don’t mind seeing the cord in the doorway or not being able to hear bits of the dialog because of the wind. We don’t mind seeing 20th and 21st century cars and trucks, or clothes and baseball caps that look like they were bought at Target, appearing in a story set centuries in the future. That’s never been what Vance’s poetry has been about. Instead, it was always about using Star Trek to speak his truth…for those interested in listening.

And even though it was never Vance’s primary intention, his fan films also served as inspiration for others for make fan films of their own. If Vance didn’t care about top-tier production quality or jaw-dropping sizzle, then how important was it really? If you have a story you want to tell, then hey, just do do it.

Vance has “quit” fan films before, and he always came back again. But this time, it’s a bit different. Now that Royce is older and the challenges of being a dad are becoming more complex than changing diapers and playing hide and seek, Vance wants to concentrate more on his family and his relationship with his son. Of course, in recent years, Royce has been really enjoying making films with his dad, and Vance says that will most certainly continue. “But I’ve said all I’ve wanted and needed to with Minard,” Vance adds. “It’s time to move onto other things in my life.”

Last week, Vance released his penultimate Star Trek fan film, MENTAL JEWELRY (which you can view here). It had a beautiful post-credits segment featuring Vance and Royce together that is certain to produce some extra moisture in your eyes.

And this past Sunday evening, Vance completed his CONSTAR series with SOME OF US STAND ON OUR OWN…TOGETHER. You can watch that below…

Back in July, Vance released an impressive (and impressively long!) 4-hour retrospective titled CONSTAR: BOLDLY GOING, documenting the incredible path that he’s traveled these past several years. It featured interview and commentary segments with scores of fan filmmakers, actors, writers, directors, and other collaborators who had joined Vance on his…er…trek. I was one of those people.

While others spoke about more specific interactions with Vance on this or that project, Vance had asked me to provide more of a general overview of the history and impact of his films…something I tend to do anyway for many fan productions.

And so, as we bid farewell and celebrate the many contributions of Vance Major to our community, I would like to share with you (with Vance’s blessing) a compilation of commentary I provided for Vance’s documentary, along with that very special montage of Vance and Royce together that brought a tear to my eye.

May the wind be forever at your backs, Vance and Royce, and may you both live long and prosper…together.