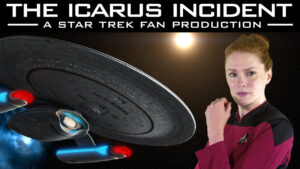 Last week, I presented the first of what will be three consecutive interviews with the very impressive female actors who have played (and will continue to play) leading roles in the TREK SHORTS fan series. British Czar of CGI SAMUEL COCKINGS has created an ever-expanding buffet of eye-popping Star Trek fan films compositing performers acting in front of green screens with ultra-detailed and realistic-looking digital backgrounds recreating starship interiors from the 23rd through the 25th centuries of Starfleet history. Then he combines these live-action scenes with uncanny VFX shots to bring to life character-based stories in ways that few fan filmmakers can.

Before I go any further, this is a good time to remind readers that Sam is currently trying to raise $35,000 to make even more Trek Shorts. There’s less than a month left, so don’t wait to make a donation…

Since the kick-off of Sam’s previous Indiegogo campaign a year and a half ago, he’s already released an impressive EIGHT Trek Shorts fan films:

And more will be completed and released soon, with several others waiting to be crowd-funded.

I covered The Tholian Gambit last week along with an interview with lead actress NIMRAN SAUND, who has appeared in no less than five of Sam’s films (see last week’s interview for links). This week, I turn our attention to another skilled thespian, the talented ALEXA BROWN, who reprises her role of Captain Joan Keller of the U.S.S. Vigilance for the first time in a Trek Short entitled The Icarus Incident.

Wait a second! Did I just says “reprises her role for the first time”? Yes, for the first time in a Trek Short. You might recognize Alexa’s character of Captain Keller from another excellent fan film from filmmaker GARY O’BRIEN (also of Great Britain), THE HOLY CORE, originally released in mid-2019. Sam brought in Alexa to play the same role in a Trek Short that was released back in August of this year, which you can watch below…

Alexa’s character is actually replacing the role of Captain Alexander Richardson, played by Dutch actor and showrunner of STAR TREK: DARK ARMADA, ROBIN HIERT. Robin was supposed to appear in the mega-fan film crossover project, CONVERGENCE, which Sam had crowd-funded back in late 2018 and was delayed due to the multiple COVID lockdowns in Europe. “Robin was set to join us for our June shoot as late as January 2022,” explains Sam. “However, in February, Robin’s real life took over, and we didn’t hear from him for a long while. At that point, he left the project, but we had still set a June Convergence shoot, as we were long overdue.” And that’s when Sam reached out to Alexa Brown.

“In bringing the amazing Alexa on board,” Sam continues, “I had to throw away the Convergence script and start again from scratch. Each character is so essential to the story that I couldn’t do a ‘find and replace’ for the dialogue. In fact, I made sure to shoot Alexa’s first short, The Icarus Incident, before I even started the Convergence  (2022) script because I didn’t know how we would vibe or where I could push Alexa beyond what I saw in The Holy Core. I had planned out her lead-up stories, but we worked to shoot the first one. I will say that Alexa was a superb fit for the cast, fantastic actor, wonderful person, and she has had a unique and wonderful rapport every with every cast member she has worked with.”

So now now we’ve heard a bit from Sam, let’s get some insights from Alexa’s perspective…

ALEXA – Thank you so much. It’s wonderful to be here.

JONATHAN – It sure looks like you know what you’re doing in front of a camera. What is your theatrical training and background? Is acting your primary occupation?

ALEXA – Acting was my primary occupation for about 16 years. I completed a drama degree and then began working in short films and fringe theatre before progressing to features, stage, music videos, and too many TV commercials to count. I loved it but quit (more on that later!) a few years ago. My agent dropped me when I had a baby, and I decided to move into voiceovers, which are now my main occupation. I also work as a screenwriter, copywriter, and script editor.

JONATHAN – Wow, that’s quite an impressive resume! So how did you first come to be cast in a Star Trek fan film—that film being The Holy Core, directed by Gary O’Brien?

ALEXA – Gary saw my CV and showreel on an acting website and got in touch directly. We had a Skype meeting where I auditioned for him before being offered the role of Captain Keller. Full disclosure: I had only watched a few episodes of Star Trek before and couldn’t pick a tricorder out of a lineup! Gary explained all the necessary lingo when it came up, but for me, the film was about the people, what drove them, and the moral question at the centre, so the setting was secondary. The Holy Core turned out to be my last acting job before I quit—I broke my foot five days before we started filming, and by then I had a one-year-old, though I would like to emphasize that my decision wasn’t at all a result of making the film, which was a very enjoyable process! 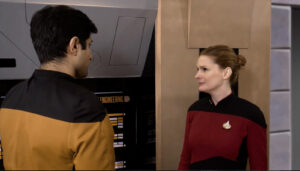 Alexa Brown on the practical (physical) partial bridge set in THE HOLY CORE.

JONATHAN – I’m glad you liked doing it. You certainly provided a very strong performance in the role.

ALEXA – Thank you so much.

JONATHAN – What is the experience like as an experienced actor working within the physical and budgetary constraints of a Star Trek fan film?

ALEXA – Honestly, it makes the acting work more enjoyable. There is nothing to hide behind and nothing to distract you. I have worked at the other end of the scale where you spend hours in a trailer waiting for your one tiny moment, suddenly get thrown into what feels like a very remote environment, and like that, it’s over. With fan films, it’s you and the director and the rest of your cast, all on a level and able to talk it through, rehearse, and get to the heart of each scene.

That said, I have never got through so many pages of script in one day, and the pace is fairly punishing—and I am frequently told that’s NOT how you hold a phaser…

JONATHAN – What went through your mind when Sam reached out to you to appear in his fan film(s) and reprise your previous role?

ALEXA – I was reticent at first. As mentioned above, I had quit acting and was working mainly as a voiceover. But I love Captain Keller, and more than anything, it seemed like it would be fun—a much-underrated quality when it comes to making professional decisions! My first day of filming was The Icarus Incident, which was just me and the green screen; no set to ground me, no fellow cast to bounce off, so it was very much in at the deep end. I am so pleased I said yes. There are many more films coming out soon which we have worked on since, and each one has been a brilliant challenge in its own way. 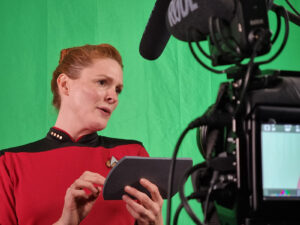 JONATHAN – Speaking of The Icarus Incident, what went through your mind when you read the script and discovered that your character would be solely responsible for totaling an entire Nebula-class starship? (Those things aren’t
cheap, and insurance doesn’t always cover damage from spatial anomalies.)

JONATHAN – How would you describe the differences (from an actor’s perspective) in directorial styles between Sam Cockings and Gary O’Brien?

ALEXA – They are both very knowledgeable and lovely to work with. With Gary, we had a physical set to play with and worked at a slower pace; the film was created over a couple of months. (We also had to accommodate my newly-broken foot, which is why Keller is sitting down or standing very still at times!) Gary created Keller and knew exactly what he wanted out of her interactions with the other characters—her sense of authority, warmth, and her moral certainty.

Sam works at a very fast speed, both in terms of writing scripts and filming a whole short in a day. We also mostly work with green screen, which means he is the one holding the visuals of the scene in his head. Only he knows exactly where each element of the set is—where we are looking out at a galaxy, or how to fly a ship, or materalise. That means the cast have to trust his direction a lot but luckily we do!

JONATHAN – Sam has announced that you’ll be reprising your role once again in an upcoming release titled LEGACY OF THE ENTERPRISE-B…and then, of course, you’re slated to appear in Convergence. Are you up for appearing in any more Star Trek fan films after that, or is this it for Star Trek fan films for you?

ALEXA – Since The Icarus Incident, I have filmed several new fan films with Sam, so there will be plenty coming out soon. Though if you want to see them sooner rather than later, donate to the crowdfunder!

After that, the future is left to be written…