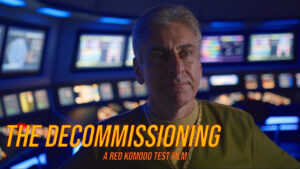 Last Tuesday, fans of AXANAR got a pleasant little surprise when a new short fan film, set in the “Axaverse,” was released by GEOFF FAGIEN, who is the Director of Photography on the two upcoming Axanar sequels.

Geoff’s two-minute vignette, titled “The Decommissioning,” is not part of the official Axanar trilogy (PRELUDE TO AXANAR plus the two sequels). Instead, created by a a separate production company, REACH FILMS, it stands alone as an adjunct to the overall Axanar storyline . Axanar, of course, is a project from AXANAR PRODUCTIONS.

So why a sudden, unexpected Axanar vignette?

It turns out that this little exercise is a “test film” trying out a brand new camera, called the RED Komodo, that hasn’t even been released to the general public yet. Geoff is one of a small number of beta-testers of the new product. They each still have to buy the camera (about $6K-$7K…a fraction of the cost of higher-end cameras), but the company, RED, is looking to actual users to provide them with feedback to help improve and perfect this newest offering. And filmmakers like Geoff are happy to help, since the results they relay back to RED will only serve to make the firmware of the camera that they just bought even better.

One of the things that Geoff wanted to test was the camera’s ability to record video in low light. Lower-end cameras often cannot differentiate among the color values of very dark colors—many times interpreting them as solid blacks. Higher end cameras do a better job. Geoff was interested in seeing what the RED Komodo could do in a low-light production environment…and what better place to test it than on the bridge of the U.S.S. Ares in Lawrenceville, GA (just a short 9-10 drive from Boca Raton, FL where Geoff lives). Geoff has made multiple trips to Ares Studios for the previous shoots for Axanar, most recently back in March just before the pandemic lockdowns started.

In August, Geoff made the trip yet again, wanting to put the RED Komodo through its paces for potential future, non-Axanar projects at Ares Studios. And even though Geoff did a few straight-on tests comparing the Komodo to a Blackmagic pocket 6K camera with the same shots in the same lighting (you can see the surprising differences in this video), he really wanted to see how the Komodo would work in an actual production environment. So in addition to a couple of simple comparison tests, Geoff decided to also shoot a short film.

The idea for the film was simple enough: it’s 10 years after the end of the Four Years War, Memory Alpha is shooting their documentary (including Prelude to Axanar), and the U.S.S. Ares is being decommissioned to be turned into a starship museum. With the lights turned down low, Fleet Captain Garth is taking one final stroll around the bridge, lost in thought…

To create the dark set, the main lights in the studio were turned off, leaving the background consoles lit solely by the colorful lighting of the buttons, panels, and monitor animations…along with the soft LEDs illuminating the tops and bottoms of each station. The bridge lights and animations look amazing enough with the set fully lit. But in darkness, the effect is extraordinary and beautiful.

Of course, it’s not as though there were NO additional studio lights at all. ALEC PETERS, playing Fleet Captain Garth, had to be properly lit or else he’d just look like Peter Pan’s shadow. And lighting him required a strong spotlight. Although the shoot with Alec wasn’t photographed with a still image camera, there is a photo from the comparison shoots with one of the female models, and here’s what it looked like with the giant spotlight… 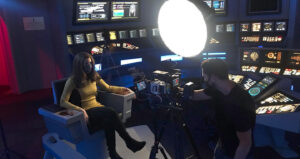 You’ll notice a few things about the above photo…

This last item deserves a little more attention, as filming with the Komodo was not the only test. When the shoot happened back in August, Alec and Geoff were also testing how to set up to minimize the risk of transmitting the Coronavirus…in anticipation of setting up the big 2-day “alien” green screen shoot in Los Angeles in a few more months. The trick was figuring out the fewest number of people needed in the studio (including hair/make-up, set manager, etc.), and the fewest number of people needed at the same time on the bridge set itself.

In the case of the second question, the answer was three: Geoff, Alec, and someone to hold/move the spotlight—and they were generally able to keep six feel apart, and only Alec was mask-less when the camera was rolling. Granted, Alec had already been diagnosed with COVID-19 back in July and was now most likely immune (at least temporarily) and not contagious. In Los Angeles, this likely won’t be the case for most of the actors. So distancing will need to be strictly observed, as the actors will not be wearing masks once they are in make-up. Also, the green screen shoots will require audio engineers to mic-up the actors and hold boom mics (this vignette required no spoken dialog from Alec). So it’s important to do these test runs in order to know what to prepare for and expect.

One last thing to point out is that really spiffy uniform that Alec is wearing…based on the same tunic variation that appeared during Captain Pike’s third fantasy in the first Star Trek pilot, “The Cage.” The tunic Alec is wearing was produced by Axanar costume creators CLAUDE DOZIÈRE (pictured in the center below) and ANGELA AVINO in Italy…

Claude and Angela originally made that awesome tunic variant for use in the full-length Axanar movie. Unfortunately, now that Axanar will instead be only two 15-minute sequels, that particular tunic likely won’t appear. So this short test film provided a perfect opportunity for Alec to wear it as Garth wanders around the bridge right before the decommissioning ceremony.

You’ll notice that Alec’s tunic doesn’t have a chest patch on it. That was kind of by accident and kind of on purpose. There’s a generally accepted piece of “fanon” (fan canon) that Garth ultimately became the captain of the U.S.S. Constitution NCC-1700. No one knows what the chest emblem of that starship looked like, and there wasn’t time to design and produce it…plus the cost of a single patch can be pretty high. Of course, Garth could have just been wearing a U.S.S. Ares patch for nostalgia’s sake, and Alec thought about doing that but forgot. So no chest emblem (maybe next time).

The brief vignette also features a number of VFX shots and footage intended for the two Axanar sequels. Some VFX shots were completed back in 2016, during the lawsuit and in anticipation of a positive outcome that would allow the fan film to be made in some way. There’s also a few shots of Garth on the bridge giving orders. So consider this an unofficial “sneak peek” at some of the footage that will appear in the upcoming Axanar sequels.