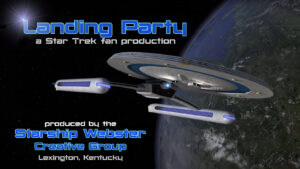 Chalk up another fan film release for POTEMKIN PICTURES, and the fifth in just over a year for the STARSHIP WEBSTER Creative Group. The Lexington, Kentucky-based team of actors is the eighth such group to assemble for Potemkin releases, and as you’ll discover in today’s interview with showrunner RANDY LANDERS, they won’t be the last!

Their latest release is a fun little jaunt that includes a bunch of Gorn, a landing party, and less than five minutes of actual footage shot on location in Belleau Woods Park in Lexington. Who says you can’t make a fan film that runs less than 15 minutes???

But what I found particularly intriguing was the use of “breather masks” for the Webster planetary reconnaissance team. During this time of COVID, masking up is an effective way to stay safe—but it doesn’t always make for good cinema. After all, unless you’re Darth Vader or Spider-Man, you kinda need your face in order to act and show emotions. However, when masks work in your story, they can serve multiple purposes in addition to keeping the cast COVID-safe.

First of all, they add a little bit of “real science” into your science fiction, since the odds are actually very slim that every alien planet you visit will contain a class-M breathable oxygen/nitrogen atmosphere. And second, if you’re filming outdoors and don’t have good mics or sound equipment, masks allow you to record dialog later on (a process known as ADR) and not have to tear your hair out trying to make certain that the dubbed dialog matches the lip movements from the original footage.

“Breather masks” were used for the first time during the pandemic about a year ago by the fan series DREADNOUGHT DOMINION in their film “We Are Many.” Now they appear in the latest release from Starship Webster: “Landing Party. Take a look…

With 58.5% of the country’s population fully vaccinated, many fan filmmakers have gone back into production without masks—at least when the cameras are running. (I know of several that are still requiring crew on set to be masked and actors to be masked while not actively filming a scene.) So I was a little curious about what prompted the Webster team to mask up in front of the camera, as well. And for that, as usual, I reached out to Randy Landers…

JONATHAN – So, Randy, why the masks? Was someone showing symptoms of COVID on the day you were filming?

RANDY – Oh, absolutely not, we would never proceed if that was the case. That said, we had a number of cast members who were concerned that COVID-19 was so contagious that even though we were filming outside that we needed to mask up.

DAVID EVERSOLE, author of many Potemkin Pictures scripts, including “The Night the Stars Fell from the Sky,” came up with this wonderfully amusing “Landing Party” script featuring the Gorn, who have made a few appearances in our productions, most recently STARSHIP ALEXANDER‘s “Crystal Eyes.”

So we equipped the landing party in “Landing Party” with masks. And of course, the Gorn actors could wear their face masks underneath the provided masks, and it was a win-win-win for all of us.

JONATHAN – So the Webster team are still taking the pandemic very seriously? I personally consider that to be a good thing, as this global crisis is still fan from over.

RANDY – Some of the Webster cast were indeed deeply concerned (and still are—we haven’t filmed with the Webster group since we shot “Snowbound” (currently in post) at one park, again wearing masks, and “Landing Party” at another park, also wearing masks. 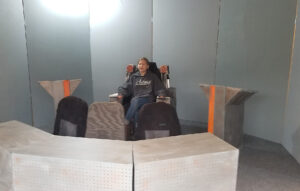 New cast member Miriam Hall sits in the command chair of a Klingon bridge being constructed in Lexington, KY.

The group’s leadership has chosen to go ahead and start construction on a Klingon bridge for the next film, but I have no timeline for Webster‘s next shoot. However—ever the bunch of opportunists—the Deimos group has a shoot on the calendar to use the sets for their upcming production, “Prime Directive.” I’ll be interested to see which group ends up using the Klingon bridge set first!

JONATHAN – I guess those masks covering the actors’ mouths make it super easy for you during post-production when edit and lay in the dubbed ADR audio, huh? No need to lip sync the dialog.

RANDY – Absolutely. But even then, there are faint head bobbles that let you know when people are saying their lines.

JONATHAN – So, as I always do, let me finish up by asking you what else is coming from Potemkin Pictures before year’s end?

RANDY – We have Webster‘s “Opportunity” coming up next. We are currently working on music and sound for it. Deimos has a short Christmas video for its fans that is ready for release, but we’re holding it until after Thanksgiving. Webster also has “Snowbound” deep in post, and Deimos has “Prime Directive” about to enter post. I won’t make any promises about release dates at this time. “Opportunity” should be out before the end of the year. “Snowbound” has been a real exercise in masking and 3D modeling.

JONATHAN – When you say “masking,” are you switching terms from the masks that you wear on your face to the digital video masks used to cover up part of the footage when you do digital compositing in post-production?

RANDY – Yeah, I’m taking about post-production. You see, it wasn’t snowing the day that we filmed “Snowbound,” so I’m doing a lot of digital masking to fix that particular oversight from our weather management department.

When you see the completed film with the digital snow added, you’ll understand the level of work…and why it’s been eight months since filming and I’m only 60% of the way through it!

JONATHAN – I can’t wait to the the finished product! So, any other Potemkin news? 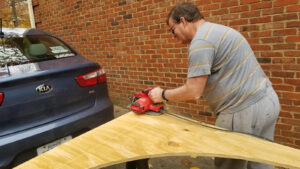 Randy Landers prepares a set piece in his carport for the new Klingon bridge.

RANDY – We recently unveiled a new creative group: STARSHIP CALIBORN, which is a different ship with a different mission: they’re a combat vessel. And then once we finish the Klingon shoot for Deimos, that cast and crew will become I.K.S. QAB’ELTH (Ragged Blade) which has appeared in a couple of Deimos productions. It will be appearing in other productions as well.

So we’ve got our hands full, and we’re continuing to look for folks who can help out in VFX and MUSIC. If anyone is interested, and understands that this is unpaid volunteer work, please contact me.

Thanks for reaching out to us, Jonathan. We appreciate how you cover us little guys!

JONATHAN – All fan films great and small, Randy, it’s all part of the job! (Just wish I got paid something…)