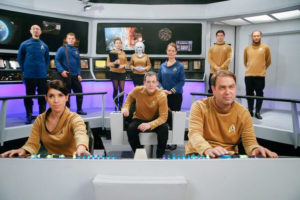 Kenny had a dream to create a fan film focussing on the very first captain of the U.S.S. Enterprise NCC-1701, Robert April, and his first mission commanding that legendary starship. Kenny’s dream was BIG! He wanted real sets and real professional actors and even visual effects with a real, custom-built 11-foot model of the U.S.S. Enterprise…none of this CGI nonsense. Go real or go home!

With a goal of $130K, Kenny launched a Kickstarter in early 2015…and it failed. He closed it down after six weeks with only $30K pledged (which meant he got nothing). But rather than giving up, Kenny simply financed the entire project himself!

The result has literally been a five-year mission in and of itself. Although all of the footage was shot—with Kenny directing—before the fan film guidelines were ever announced in June of 2016, the film has still taken years more to finish. In fact, I first interviewed Kenny back in early 2017 (it’s a FANtastic 3-part interview that you can start reading here), and he planned to have the project completed before the end of the year. Obviously, that didn’t happen.

Then in January of 2019, a new trailer promised a release later that year. Kenny actually showed me the nearly-completed fan film, and I suggested that he aim for an April 1st release (because Robert APRIL was the 1st captain of the Enterprise…clever, right?) Kenny loved the idea, and the premiere date was unofficially set.

In preparation for that debut of this major fan production, I did a special audio interview with SCOTT LYTTLE and MATT GREEN, who built both the 11-foot Enterprise, a giant hangar bay, and all of the sets. The interview includes a photo montage with more than 200 pictures of the sets and starship model being constructed, and is itself a must-see. Check it out here.

But unfortunately, the film did not premiere on April 1, 2019. The visual effects were not yet complete. But that’s when “the miracle worker” of CGI, British animator SAMUEL COCKINGS, beamed in like Mary Poppins with a phaser and managed to produce an insane amount of VFX shots at warp speed (still took him months!) and help bring the project to completion. Yes, there are still physical model effects shots in the film, but Sam’s CGI completes the package in a most delightful way!

Of course, many fans are wondering what ViacomCBS will do—if anything—about this fan film that is over 30 minutes in length and uses professional actors (both of which are no-no’s according to the guidelines). Right now, no one knows for sure how the owners of Star Trek‘s intellectual property will react, but keep these three things in mind…

So take from that any grains of salt that you will. But if nothing else, Star Trek: First Frontier has now been completed and premieres below for your viewing enjoyment…

This past Sunday, I interviewed KENNY SMITH and his producer/editor, ZEKE FLATTEN. If you’ve just watched this amazing production and want to find out more from the men behind it, then pull up a chair (unless you’re already sitting down) and give a listen to this really fun and informative interview. That’s Zeke on the left and Kenny on the right …