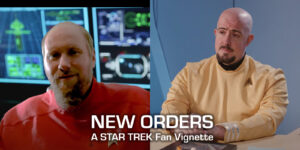 There’s a lot of love and camaraderie in the fan film community. That’s one of the reasons that I enjoy creating and maintaining this blog. Oh, sure, there’s also some trolls and drama and silly “feuds,” but honestly, I don’t really pay much attention to all of that anymore because it’s pretty meaningless.

What is meaningful—with the emphasis on the FULL part—is all the positivity that Star Trek fan films bring…because when it comes right down to it, we’re FANS. It’s what got me involved in the world of Star Trek to begin with, knowing there was this group of people who loved something that I loved, too, that we could share and bond over…no matter our backgrounds or location or anything else that might separate us. Star Trek brought us TOGETHER!

NEW ORDERS might not seem like much. There’s minimal VFX, and only two characters are talking to each other via subspace for most of it, with a third popping up at the very end. But for me, it was so much more—it was a chance for me to watch two dear friends come together to make a fan film.

JOSHUA IRWIN and VANCE MAJOR have worked together before this. Josh (as well as his Avalon Universe collaborator VICTORIA FOX) has appeared in some of Vance’s CONSTAR productions, like “SHAKEDOWN.” And Vance made a very brief cameo in the Avalon Universe episode DEMONS. But this time felt different. New Orders wasn’t simply one of them appearing briefly in the other’s film. It was two two fan filmmakers who have become “legends” in our small-but-close-knit community, coming together as equals, and teasing the arrival of an awesome fan-favorite character into a fresh, new universe.

The fun thing about the Avalon Universe is that it’s Star Trek–ish but without five decades of canon weighing it down…kinda like what Star Trek: Discovery coulda/shoulda been had they just told us from the beginning that it was a parallel Trek universe (then most of us would have forgiven the different-looking Klingons and shiny uniforms and super-advanced tech). So characters from “standard” Star Trek fan films can pop up in the Avalon Universe in completely new ways. In fact, Captain Jakande, who died in my AXANAR Universe fan film INTERLUDE, will be making an appearance in an upcoming Avalon fan film, alive and healthy and played by actor WARREN HAWK.

As most of you probably know, Josh and Victoria were my directors on Interlude, and I consider both to be good friends. We often spend hours on the phone. The same is true for Vance, for whom a “short” call between the two of us is defined as anything under an hour!

So when I saw Josh and Vance having their own subspace “call” in New Orders, I decided to ask them both to say a few words about this new project…

Honestly, there would be no Avalon Universe without Vance. Years ago, I followed this Facebook group called “Project: Small Access” to keep up with what was going on with Fan Films after the guidelines. That became “Fan Film Forum.” I noticed Vance posting his films there all the time. I thought it was really neat that he was living his dreams, so I started leaving words of encouragement on his films, and not long after I got a friend request from him. He encouraged me to start making my own fan films, and even helped me book our first shoot at Neutral Zone Studios in Kingsland, GA.

As a filmmaker, and actor, I’ve watched Vance go through an amazing journey of growth. On a live stream, ALEC PETERS got to talking about people who just go out and make films until they become great filmmakers, and I was like, “You’re describing Vance!”

I’ve always intended for Vance to be a part of Avalon Universe, and I have a fun idea where we can see many different versions of his character there. With the vignette New Orders, we shot that last year. Really, we were all just bored and wanted to do something. Vance really wanted the chance to come up with some ideas for Avalon films that he could be in, and we did two of them. He worked with Victoria to develop the script, and I drove out to WARP 66 Studios here n Arkansas and shot my part on a Saturday afternoon. He did his part in his new studio.

Since the story of it takes place after AIR AND DARKNESS, I wanted to release that film first. There will be two more similar pieces that will feature Vance that will come out after COSMIC STREAM, our next release. One is called “FTL NanoEncabulator,” which is kind of just a little silly joke, and the other one is a more serious piece called “The Truth Within.” These are both prequel films that will take place before GHOST SHIP, so I wanted to wait and release them together. I expect to release those films and Cosmic Stream in June. Fingers crossed.

I’ve always felt honored to be a part of this sandbox. Back in the early days, no one wanted me in their films. Turns out that when you’re bald and fat, it’s kinda hard to be picked up in films…even fan films. Go figure. But the Avalon Universe allowed me to come be a part and accepted my ideas when I had them.

Since COVID hit, it’s been hard for me to leave my job, as I am one of the “essential workers” (in meat processing). So I couldn’t go off to film. That’s one of the reasons that I had to cancel my own shoots at the studios and instead do more “comm box” films.

However, the idea was presented by Josh and Victoria for me to do some things for Avalon here at home, to tell some backstory and fill in some gaps. I was allowed to pen the first draft of The Truth Within, and that was a huge honor—to get to not only be a part of this sandbox of high-quality visuals and standards but to also get to join in the creative process.

I really enjoy collaborating, and this was that in spades. I’m very excited to see the final product, and watching New Orders is a special treat for me. Yet again, being given certain things for characters I’ve created, characters I’ve worked on in my own films, that’s a real treat for me. In a sense, I get to have a “do over.” Knowing that Emily (Minard’s wife) died in the prime universe early on in their marriage and seeing her reference Eobard, that’s really trippy to me, as a fan, because Minard’s son came much later after her death in the prime timeline. In my mind, it’s comparable to Guinan meeting Tasha Yar, just very surreal. And I really love that.

Also, you’ll notice that Minard is kinda tense the whole time, but the wave of calm at seeing his love, that to me is the greatest thing. It says all you need to know about fan films’ strongest couple. The Avalon Universe gave me that. It’s a blessing, and I’m excited to continue that.

And Josh, making his character of Austin more real with each passing film he does, I like that he made it clear these guys are familiar with each other, not just co-workers. To me, universe building is very important(obviously, after all the work I’ve done on my own stuff!), and I love seeing the universe being built here. It’s not just rank and file people that blow things up. It’s characters. And the parallels to other universes are seen here; that’s VERY appealing. Again, the do-over. Everything about this universe feels exciting, and I’m thankful to have been brought in. I’m excited to be the chief engineer of the Excalibur, and I can’t wait to see where the final frontier takes us!

The first time i spoke to Josh on the phone, I felt a kindred spirit. We must have spoken for four hours, I think, but I felt like I’d known him for years. Like most things, there have been ups and downs, but I really love the guy. And he’s someone I enjoy working with when I can…and I don’t ever want there to be a point when I’m not. He’s become part of my fan film family.

My 4-year-old son, Royce, asked me a few days ago, “Daddy, when can we go back to the spaceship?” and he wasn’t talking about the sets in our den. He was talking about the pictures he had hanging over his bed. To me, even with my films winding down after my next season, I want to continue with people like GEORGE KAYAIN, FRANK PARKER, GREG MITCHELL, and MICHAEL KING…and Josh. When they need me, I don’t want to tell them “no” because this life we have, we only live once.

And I want Royce to always be able to go to the sets and feel as comfortable as I do there. Because one day I won’t be around, and when he thinks of me, I want him to turn on Star Trek and remember the good times that he and his dad had…the good times he made with people like Josh and the others. I’d like my son to make his own memories, and maybe even his own fan films.