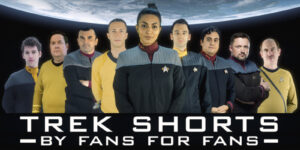 Okay, I usually say things like “If you can afford to give a little something…” or “At least please share the link with your friends…” And yeah, consider me having said those things.

But seriously, get out your wallet! Go here and donate something:

Why am I so pumped about this new Indiegogo campaign from TREKYARDS‘ SAMUEL COCKINGS, the Brit who doesn’t quit when it comes to CGI animation? Well, first of all, it’s Sam Cockings! What he can’t do with a 3D starship just isn’t worth doing, people! But here’s the real reason you need to donate to this project:

How can Sam afford to produce SIX different fan films for just $10K (or whatever the heck that is in British pounds)? Well, actually, one of these films is already finished as a proof of concept. So you’re really just paying for five new fan films and reimbursing the costs for the sixth. But take a look at the incredible quality of the one that was just released:

You’ll probably recognize the four main actors in this fan film. There’s NICK COOK and his real-world wife LUCITA COOK on board the U.S.S. Intrepid from the long-running Scottish fan series of the same name. There’s NIMRAN SAUND, who did an amazing job back in 2013 filming scenes for TEMPORAL ANOMALY (which was released in 2019). And finally, making her triumphant return to fan films, the much beloved MICHELE SPECHT from STAR TREK CONTINUES plays a brand new character.

And that’s just ONE fan film!

Honestly, I don’t know why Sam is calling them “short.” The first one is pretty much pushing the 15-minute time limit imposed by the fan film guidelines. But I suppose if ViacomCBS can call their 15-minute mini-episodes Short Treks, Sam can make his just as long and call them Trek Shorts.

Anyway, to answer the question of how Sam can afford to make multiple releases for the price that some fan filmmakers raise for just ONE project, the answer is simple: virtual sets. But not just any virtual sets. Over the years, Sam has been collecting and developing some of the highest quality and most realistic virtual set models anywhere, which you can see from the above video. In fact, that’s where most of the funds raised will be going: 3D models of backgrounds and starships (which do cost money to create, as they are very time-consuming). Once Sam has them, he can animate and composite green screen footage of the actors. But paying 3D modelers is like paying for props or costumes…the time-consuming labor is not free.

So what will the other five fan films be about? Glad you asked…!

Do you have a favorite Star Trek series? TOS? Next Generation? Deep Space Nine? Movie-era? Lower Decks, perhaps? Well, whatever your preference, Sam might just have a fan film for YOU!

KILIAN McINTOSH returns as Lt. Jack Archer of the U.S.S. Excalibur. He crashes on an unknown planet and finds a Tholian-created doorway to another universe…the Stargate Universe.

In addition to the TOS-era Jack Archer, this short brings back another character from Temporal Anomaly: MARCUS CHURCHILL as Ensign Sam Harriman. It’ll be just like old times…except with, y’know, Stargate!

MOVIE-ERA plus THE AVALON UNIVERSE?

“FAMILY TIES” promises to be an emotionally powerful story set during the Wrath of Khan era with costumes and set backgrounds from that period in Starfleet history. There will also be flashback elements directly from the classic TOS era as a young officer will go to any lengths to save his father, thought lost 30 years earlier.

This short film will be a collaboration with the production team from the Avalon Universe fan films.

Star Trek: Deep Space Nine has been off the air since 1999, and the Paramount sets on Stage 4 and Stage 17 were stuck the day after shooting wrapped on the final episode. (I know; I was there. It was heartbreaking to see the Promenade set deserted with everything boxed up.) Since then, only one fan series has even attempted to to show the interior of that space station…and no fan film has ever shown the interior of the U.S.S. Defiant.

In”THE SILENT PAIN OF WAR,” a young officer, filled with enthusiasm over his new posting, arrives on the Defiant eager for action in the Dominion War. But as his guide provides a tour of the ship, a life lived on the front lines, enduring not the glory of war but the pain of it, challenges the expectations of this new recruit. Two officers, two perspectives, one fan film.

THE DOOMSDAY MACHINE in the 24th CENTURY?

The Enterprise-E runs into yet another planet killer a century after Captain Kirk and crew barely survived their encounter with one. But this isn’t just another version of “The Doomsday Machine.” That’s just the B-story. Nope, this time Sam is doing it Lower Decks style with Ensign Sam Harriman (him again?) and another support crew member doing their bit to help out during this major confrontation.

Would you like to see the U.S.S. CERRITOS in a FAN FILM?

Did you enjoy Nimrad Saund as Lt. Anna Keely in “A LONG WAY FROM HOME” (the Trek Short fan film at the top of this blog)? Well, assuming Sam reaches his crowd-funding goal, she’ll be back again in “FLEETING MOMENTS OF PEACE” as she is on a mission to drop off supplies to the U.S.S. Cerritos (from the animated series Star Trek: Lower Decks). But before she gets there, Keeley is drawn into a much larger political situation and must help in her own unique way to avoid galactic consequences.

This Trek Short will be a collaboration with the SQUADRON production team from the Czech Republic and will bring back JAKUB HOLÝ’s character of Captain De Santis and the U.S.S. Minneapolis from that amazing fan film

Other Trek Shorts will include participation by team members from long-running fan series DREADNOUGHT DOMINION and STAR TREK: DARK ARMADA/BATAVIA.

And there you go—six fan films (one of them already finished) for just $10,000. And not even that because, in just the first few days, Sam has already taken in nearly $2.2K from 25 backers. So why not help him fill in the remaining 80%? There’s some nice perks, including your name on screen as a member of the Defiant‘s crew, digital sound tracks, digital and physical posters, T-shirts, and even an opportunity to have a speaking part voice-over in one of the films!

Did I convince you? If so, there’s four weeks left, and here’s that link again…