Fan Film Tuesday – Avalon Universe releases THE NEEDS OF THE ONE (part 3: video interview with JOSH IRWIN and TYLER DUNIVAN) 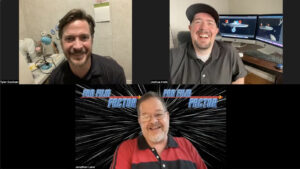 About six weeks ago, I published a blog including the first of three video interviews spotlighting the latest release from THE AVALON UNIVERSE, an impressive 30-minute fan film titled THE NEEDS OF THE ONE. If you haven’t seen it yet, check it out below…

That first interview was with the new lead actress for the series, ALEXANDRA REXFORD, who plays Commander Mikeala Allenby, the first officer of the U.S.S. Excalibur. Two and a half weeks later, I posted the second video interview with CORA WILSON and WADE KING, who played the adorable shipboard couple of Vulcan Nurse T’Prin and Security Officer Williams.

And now it’s three weeks after that, and I’ve finally completed the hat trick with my third and last interview, this time with showrunner JOSHUA IRWIN and actor TYLER DUNIVAN…the Butch and Sundance (or perhaps Bill and Ted) of fan films! And why the long delays between interviews? Busy people, busy schedules—and it’s much more challenging coordinating two interviewees than one!

However, before we dive into the chat-fest, a quick update on the Indiegogo crowd-funder for CRISIS ON INFINITE EXCALIBURS. You are welcome (and encouraged) to donate here…

I’ve actually been contacted by a few members of our fan community asking if I was concerned that the campaign has “stalled out” a bit over the last two weeks, stuck just short of the halfway point with only 21 days left, and if I had any ideas why donations had seemingly dried up.

So no, not terribly worried yet. Let’s see what happens over the next couple of weeks.

In the meantime, today’s video chat with Josh and Tyler begins with a discussion of the upcoming project, with new details revealed.

Then we hit a delicate subject that Josh and Tyler wanted to address personally, and that is the departure from the series of a few team members, including executive producer and lead actress PIXI NEREID, who had been so prominent last year both during crowd-funding for and then starring in the ambitious AGENT OF NEW WORLDS. Now she and two other actresses have been recast. So…what happened? We’ll be talking about this, as well.

And of course, we’ll also be taking about The Needs of the One!

By the way, you might notice that, unlike most of my Fan Film Factor video interviews, this one contains noticeable edits where the interview cuts from one topic to another. This was actually done for your benefit, believe it or not, as the original uncut interview timed out at nearly TWO HOURS! I usually try to keep things closer to 60-90 minutes max. So Josh (master editor that he is) stepped up to trim what he felt wasn’t really that important and more just the three of us rambling on about this or that. Don’t worry, folks, you aren’t missing anything earth-shattering.

But it’s definitely worth checking out what is now only a 74-minute interview, as it’s really fun and informative…