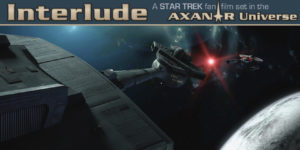 “But I really want to direct…”

I don’t know the first thing about directing—not even when to shout “Action!” and “Cut!” And I don’t pretend to know. Of course, I applaud those countless fan filmmakers who have taught themselves to direct through creating their own fan productions. More power to ’em! But I know my limits…and I don’t want my fan film to suffer just because I haven’t got the slightest idea what the frack I’m doing.

Fortunately, the fan film community is full of folks who DO know what they’re doing…including directors. Now, you might be thinking that I first decided to make my fan film and then went out to find a director. In fact, the exact opposite happened—and not only did I find one director, I found TWO!

Let me tell you what happened…

If you read my blog from last week, you know that I hadd been creating an AXANAR comic book based on a short sequence in an alternate version of the 15-minute Axanar shooting script that I wrote. I turned that short segment into a slightly longer vignette story, adjusted the dialog into word balloons for the comic book format, and created a rough panel layout for the artist, DANIEL FU. Daniel then proceeded to take my ideas and make them a hundred times better! He just finished the last page of the story a week ago, and I can’t wait to share it with you folks. Here’s a sample… 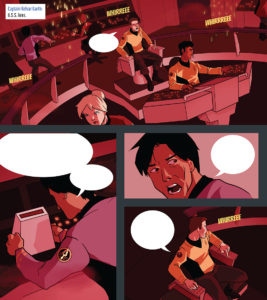 But to be honest with you, I never thought of doing anything more than that. There’s no way I’d ever attempt to turn my full 30-page alt-Axanarscripts into actual fan films. ALEC PETERS is already making Axanar. So adapting brief segments of my script into short comic stories seemed to be the limit of my ambitions.

Jump ahead to November of 2018. Axacon had just happened, and thousands of people across fandom saw this photo (and others) plastered across the Internet…

Shortly after I’d returned from Axacon, I was doing an interview with JOSHUA IRWIN, the director of just-completed Star Trek fan film GHOST SHIP (the first of the AVALON Universe fan series, this one was released on Halloween). Having completed the interview, Josh and I began just shooting the breeze about Trekkie stuff because we’re both geeks and that’s what geeks do.

The topic quickly shifted to the Ares Studios bridge, and Josh was gushing. I naturally shared his enthusiasm and asked if he might consider filming one of his Avalon Universe fan films there. After all, Alec intends to open up the sets to any fan production that wants to shoot on the bridge.

Josh shifted into director mode immediately (something he does professionally in Arkansas) and began talking about all the different ways he’d light the bridge, place the cameras, do wide shots, establishing shots, close-ups, pans, you name it. He would love-love-LOVE to shoot on that set. “But I’d need a script first” he said. “I don’t have anything that would take place on that bridge.”

“Hmmmmm,” I replied, thinking about my alt-Axanar script, “I might have something for you to take a look at…”

I told Joshua about the script and the comic, and suggested it might make for a decent fan film. Not the whole script, of course, but just the scene with Ramirez that was being made into the comic story I was calling “Stardate: 2245.1.” Josh was juiced, and agreed to direct if I could crowd-fund enough to make it. I got to work on turning the expanded comic book script back into a film script.

Jump ahead a few more months, and I was interviewing again—this time Joshua and his co-director for the second (and third) Avalon fan film, VICTORIA FOX. I hadn’t realized, when I first invited Joshua to direct my fan film, that he and Victoria kinda came as a “set.” Not always, mind you. They each have their own professional careers in the entertainment industry. Victoria is also an actress and casting director, Josh also does camera and technical work (director of photography kind of stuff), they both write and produce, “but they really want to direct.” And that’s one of the reasons they’ve been collaborating on a series of Star Trek fan films along with other professional projects.

How does it work having two directors? Well, you can ask the Russo brothers, who just directed Avengers: Endgame, or listen to this audio interview with Victoria and Joshua. But here’s the general idea. Victoria is very much an “actor’s director.” She’s great at communicating what emotions and tone the performances should be conveying. Joshua, as I said, knows the technical stuff backwards and forwards (not that Victoria doesn’t!) and can plan out the scenes practically. But as they told me, it’s not like they each work in isolation. Their collaborations are completely synergistic, and there is a LOT of overlap.

When I heard this, I decided to invite Victoria to work on my projeacct, as well, assuming Josh was okay with bringing her on board, and that Victoria had the time in her schedule to do it. (They are both very busy in their careers.) Victoria ultimately agreed, Josh welcomed her involvement, and now my biggest hassle is figuring out which name comes first in the credits! (Seriously, I asked Joshua to direct before I asked Victoria, but ladies first…and then there’s alphabetical by first name…or last name…oh, this is a much bigger dilemma for me than you realize, folks!)

Well, anyway, I can’t begin to tell you how amazingly impressive both of these people are—and so nice!—but not so nice that they don’t shoot straight with me. After reading my script—which I’d refined to “perfection” (or so I thought!) over nearly two years, tweaked for Alec, turned into a comic, and turned back into a shooting script—Victoria had “notes.” Oh, geez, notes…here we go! What have I gotten myself into? I said to myself.

But as Sargon is my witness, Victoria was right! Her change suggestions, after I did the rewrites, really DID make the script better. Of course, now the comic book and the fan film won’t match exactly…but so what? That means I can release the comic book first and folks will still be surprised by things in the film.

But where Victoria and Joshua (or is that Joshua and Victoria?) proved to be invaluable came a few weeks later…when we finally figured out how much I’m gonna need to crowd-fund to get this thing made.

Come back next week to share my sticker shock….!