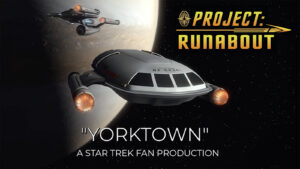 (Sorry for the two-day delay in posting Fan Film Friday.  Last week, I sneezed my way into the emergency room.  Seriously!  It’s called costochondritis, and it’s limiting the amount of time I can sit at my computer without having to lay back down.)

Up until last month, when most fan film Trekkers thought of YORKTOWN, they pictured the long-awaited production A TIME TO HEAL, starring GEROGE TAKEI as Sulu and the late JAMES SHIGETA as Admiral Nogura.

But as of July 17, 2022, YORKTOWN now ALSO means the latest episode of PROJECT: RUNABOUT, a relatively new fan series spun off from the long-running DREADNOUGHT DOMINION fan series. Last year, Project: Runabout debuted with their pilot episode, the 5-minute vignette PILOT, featuring the pilot of a small TOS-era runabout-class shuttlecraft getting ambushed by a Klingon warship. And it was all a music video! But what really got fans’ attention was that showrunner GARY DAVIS constructed the elaborate runabout cockpit set in his basement. Talk about a man-cave, er, cockpit!

This year, Gary and Dominion/Runabout co-showrunner RANDY WRENN tackled a much more ambitious half-hour fan film. But it was even more ambitious than that! For the first time that I’m aware of, a fan production filmed nearly a third of its scenes on board an actual American aircraft carrier from World War II.

That aircraft carrier was the U.S.S. Yorktown (hence, the name of this second episode), which is a proud part of a naval and maritime museum located on Patriots Point in the Charlestown Harbor in Mt. Pleasant, South Carolina. And it wasn’t just a short scene or two. Gary and Randy shot in nearly a dozen different locations throughout the naval ship, including the engine room, mess hall, briefing room, and even up on the flight deck!

It was quite an undertaking with very impressive results. Take a look…

Obviously, there’s a lot of questions to ask about the making of this fan film…both the scenes on board the Yorktown as well as those in Gary’s basement and the expansion of his sets into an even more elaborate cockpit along with a brand new briefing room and transporter.

So I roped Gary and Randy into a Zoom call, and then the fun started…