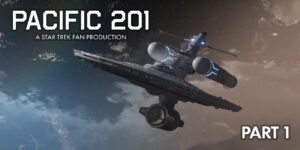 It’s been an awesome three months for long-awaited Star Trek fan films! Back in September, the hour-long STAR TREK: FIRST FRONTIER premiered after being in production and post-production for five years. In October, it was time for THE ROMULAN WAR, which started production back in 2017, to finally release the first of its two-part documentary-style fan film.

And now, on November 13, one of the most eagerly-awaited of all Trek fan films (right up there with AXANAR and YORKTOWN: A TIME TO HEAL…the latter of which is scheduled to debut next month), PACIFIC 201 launched the first half of its two-part fan film. Originally crowd-funded with a $26K Kickstarter way back in September of 2015 and a$32K Indiegogo campaign the following year, Pacific 201 was the brainchild of Harrisburg, PA-based showrunner ERIC HENRY.

What makes Pacific 201 so unique and exciting is the time period it covers in Federation history. The year is 2200. It’s four decades after the end of the Romulan War and the founding of the United Federation of Planets, and still more than six decades before the time of Kirk’s five-year-mission. Earth and the Federation are at a crossroads. Those who remember the horrors of the Romulan attacks fear a return to deep space exploration and the risk of provoking new enemies. But a new generation born after the war dreams of returning to a renaissance of exploration and discovery.

This push/pull of paranoia vs. positivity was put on display in one of my all-time favorite fan vignettes, DOWN TO EARTH, which Eric released back in late 2016. In this short film, the first officer of the USS Pacific is grilled by a talk show host who is anything but fair and balanced when it comes to restarting the exploration of space. The following summer, another Pacific 201 short vignette was released, featuring the new captain. (You can watch that here.)

Over the years, Pacific 201 seemed always on the cusp of debuting. Back in 2018, a series of images were released along with a promised premiere date of spring 2019. That didn’t happen. But then earlier this year, a new trailer with some amazing footage promised a release date of August 2020.

Missed it by that much!

But who cares? Part one of Pacific 201 is finally out, and it was totally worth the wait. Take a look…

I set up a phone interview with Eric Henry for a couple of days before the premiere (after getting just a sneak peek of a short 2-minute scene). But when I called, producer and star MARGARET HERBENER was there, as well, finishing up some last minute editing with Eric. She was just about to head out, but I invited her to stay for the interview if she and Eric wanted—and they were both up for it. So two for the price of one, folks!