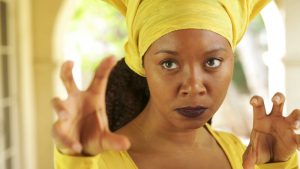 In Part 2, ALIZA (uh-LEE-zuh) PEARL, the co-writer and star of THE LISTENER: SPECTRAL AWAKENING  told us about how the series title was changed from Guinan: The Series even before the release of the new fan film guidelines in order to be able to keep to the vision that she and her co-writer/director Lamar Perry wanted.

We also discussed her experiences filming their new trailer at Industry Studios (now Ares Studios) and the support that she and Lamar have received from Axanar show-runner Alec Peters.

And then I asked her this question… 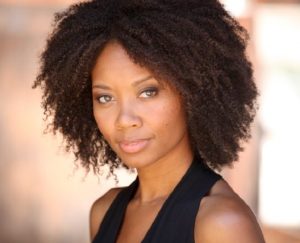 ALIZA – I’ll answer the question by backing up to my childhood. I think it’s actually bigger than just fan films. I don’t think it, I know it. It’s not just fan films; it’s everywhere. It’s media, in general.

But if we’re even gonna hone in on sci-fi—from just fan films that are sci-fi based to all of sci-fi (TV and film)—yeah, one of the reasons why I was drawn to create something like this was because of this exact fact. There’s so few characters of color and black characters that have main story lines in sci-fi. There is definitely a lack of diversity in the genre, but the funny thing is, there are many people of color who love sci-fi and who LOVE Star Trek.

So I think it’s one of those things that might be hard to understand for some people if they’re used to seeing images of themselves reflected as main characters and always at the forefront of the stories. But growing up as a person of color and a woman of color in this country, you kind of grab onto the images and the characters that look like you. And you’re, like, “Oh, yeah, she’s awesome!” or “He’s awesome! Oh, that’s inspiring.” And then that’s all you have. And so you’re really excited about those few that are out there.

And so I got to a certain point where I realized, “I’m a writer. I’m an actor. I know people who do special effects, I know people who do visual effects, I know people who are awesome prop-makers and costumers. I love sci-fi. Why don’t I just make this? Why don’t I just do this? And it completes all these things that I love in the world. I love acting. I love writing. I love sci-fi. I love Star Trek. I love diversity and inclusion, and I want to help create a space so that other little girls who grew up like me will have something else to see themselves in and can expand their minds.

And beyond that, it’s not just for little girls, black little girls, mixed little girls, or people of color in general. It’s for everyone. There’s so many studies and think pieces and research out there that prove that diversity is important for everyone in this country, in this world. It’s not just for people of color. It’s not just to make us feel happy or feel better about things. It’s for everyone. It benefits everyone. We love to see the human condition reflected back at us. The human condition is not just about people who look a certain way or talk a certain way. It’s all of us. And we’re all enriched by seeing diversity. We’re all enriched by it.

There’s so many reasons, Jonathan, for us to have created this. And yes, at the core, we want to create an awesome, awesome sci-fi project that everyone resonates with. But yes, it’s important to us that we are both black people, we’re both people of color. I’m from a mixed background; I’m part Latina and African American. So yes, it’s important to me to have a woman in this role who is of color.

And you know, several years ago, I had written a script, an original TV pilot that was kind of a campy, sci-fi hour-long dramedy. And I had a friend read it. So when we met to talk about it over coffee, I told him, “Yeah, y’know, I love this idea. It’s really fun, and my plan is to cast a female of color in the lead role. And she would be the centerpiece of the story.” And he kinda paused. And he was like, “Why?” And I said, “Because that’s just not done, like…ever. I want this particular story to be told through that lens.” And he was, like, “I think you should let go of that idea.”

I was kind of shocked. And I realized then that I don’t want to always have to compromise.

JONATHAN – The person you were telling this to…was he black or white?

ALIZA: He’s a white guy…a friend of mine, actually.

JONATHAN – I was sorta curious that because, having lived in Los Angeles now since 1993, I can understand people being that blunt with you. And yet, it’s still kinda shocking.

So yeah, part of my creative voice, I’m realizing, is creating great content but also diversity and inclusion…being a core part of that and not being taken for granted. It’s not stunt casting, it’s not some special “Oh, we’re trying to pander certain communities!” No, none of that. We need to normalize diversity in media.

I can talk about this for hours and hours!

JONATHAN – I realize you’ve just given me the entire third part of the interview right there! [We laugh.] But I’m glad I asked the question now. I was so worried about tiptoeing into that particular subject, but you gave me a wonderful response on it.

When I was putting together questions for this article, I was thinking about black actors in fan films and black actors in Star Trek, in general. And while there have certainly been some black series regulars in Star Trek during its history—obviously Uhura was the trailblazer, then Geordi LaForge and Worf, Guinan (of course!), the Sisko family, Tuvok, Travis Mayweather—with the exception of a couple of references during TOS (like when Lincoln comes on board), the cultural “blackness” of these characters was never really explored to even discussed. As for other regulars of non-Caucasian races—Sulu, Keiko O’Brien, Harry Kim, Hoshi Sato…I suppose B’Elanna Torres has a Latina name—their cultural heritages weren’t all that prominent, either. 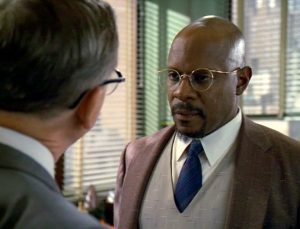 Of course, it’s the future, and race and skin color shouldn’t be any more relevant than height or eye color, so focusing on Benjamin Sisko being a black man would break that “illusion” of being in the future. And speaking of “illusions,” the one time DS9 actually dealt with racism directly and Sisko’s black heritage was in the magnificent and stunning episode “Far Beyond the Stars,” where Sisko awakens as Benny Russell, a black sci-fi writer living in the 1950s. But the fact that this was an orb vision kind of illustrates my point, in that it was showing Sisko “history” and not the color-blind future of Federation.

I’m sorry…I’m rambling. This is supposed to be your interview, Aliza.

ALIZA – Oh, that’s fine. My thought is that, when you only have—what is it?—4% to 7% of sci-fi characters being people of color, then every different representation we see seems to represent the “whole”…which is not the case. Which is why we need more, just in general more. Because I think both are valid. If we’re looking at a Star Trek captain who is a black man and not talking about his race, then that could be valid. But also, we should have the other side of it. We should have someone who’s exploring his roots. It could be one-and-the-same character; it could be certain episodes. But really, there should just be more in general!

That’s what I was saying before about growing up and having so few characters who look like me or are from similar backgrounds who I could relate to in that way. When there’s so few, there’s a lot of pressure on those few to be perfect and to do everything for everyone. But there are so many different types of black people, Latinos…we’re not just all one monolith of culture and upbringing and influences. We need more. We just need more, in general. 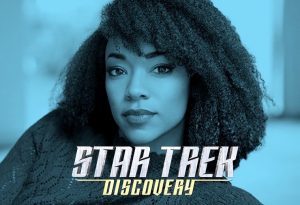 ALIZA – Yeah, I’m really excited for Star Trek: Discovery, but again, that’s ONE show. We need a lot more. We need to make that 4%-7% go up by a LOT to make any strides. And hopefully, maybe Star Trek: Discovery will inspire other projects and other black females to create sci-fi. We just need more. It looks like a desert of diversity in sci-fi. And I’m personally trying to just contribute to more diversity in sci-fi.

JONATHAN – As well you should! And finally, when do you think your trailer is going to be done?

ALIZA – Well, definitely 2017. I’m hoping within the first quarter of 2017, we’ll launch the trailer and our fund-raising campaign.

JONATHAN – Are you gonna use Kickstarter or Indiegogo? Have you decided yet?

ALIZA – We’re leaning toward Kickstarter. Like I said, we’re pretty flexible in terms of we just want to make the decisions that make sense to us. And so neither of us gets really locked into anything. And if we do, we know it’s important. There’s certain things that we won’t budge on. But yeah, we’ll make that decision when we get to it. We’ll see what makes more sense to us. Right now, it’s Kickstarter.

JONATHAN – Aliza, thank you again…and best, best, best of luck to you and Lamar.

ALIZA – Well, thanks for having me! I really enjoyed talking to you, and I’m honored that you wanted discuss our project.

Aliza invites anyone in the southern California area to come enjoy her live comedy group, The Improvised Generation, at the Impro Studio, located at 1727 N. Vermont Ave #211 in Hollywood.

The Improvised Generation creates original, improvised 45-minute episodes in the style of Star Trek: The Next Generation. With new characters and a new ship, this cast of professional performers/Trekkies mix genuine Star Trek reverence with core storytelling techniques to create authentic voyages through the final frontier.

Their new season opens on January 14 and runs on Saturday nights at 9:15 through the end of February.  Tickets are $10, and they recommend you order online rather than buying at the door, as they often sell out.

Check the Impro Studio website in January for more information.