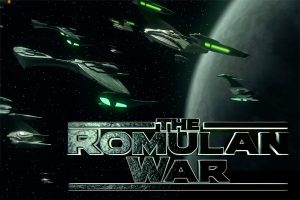 Yesterday in Part 1, I began chatting with MARK NACCARATO, the show-runner behind the upcoming fan film project THE ROMULAN WAR.  People have gotten really excited about this new production…and with good reason!  The brutal interstellar war between the Romulan Star Empire and Earth and its allies has fascinated fans since it was first referred to during the TOS episode “Balance of Terror.”  But before the TV series Star Trek: Enterprise could really sink its teeth into the conflict, the show was canceled.  So frustrating!

But now an ambitious new fan production will give Trekkers a unique look inside this fascinating struggle…not simply as a scripted drama but in a mock documentary format similar to that presented in the fan film hit PRELUDE TO AXANAR.  Mark revealed in part 1 of his interview how his project actually predates the creation of Axanar by over a decade, as he began working on The Romulan War as far back as 2000.

The production just launched  a $10,000 Indiegogo crowd-funding campaign last week, and after just ten days, they’ve already gotten nearly halfway to their goal!.  And because this is Indiegogo and not Kickstarter, they don’t have to reach that goal to actually collect their contributions.  Every dollar donated WILL go to their project, which has already filmed about three-quarters of their scenes and will soon be entering post-production.

If you haven’t watched it yet, they’ve created a very engaging promotional video about their project and crowd-funding campaign:

And now, let’s dive right into the conclusion of our 2-part interview with Mark Naccarato…

JONATHAN – It sounds like your story is vast and might need more than just the two 15-minute episodes allowed by the fan film guidelines.  How many episodes are you planning to make, and will you be following the guidelines?

MARK – Good question about the number of episodes, and I’ll be the first to admit… I don’t have an answer for you yet! Before the guidelines, we had broken the story out into sixteen “chapters” that covered the different battles and campaigns of the war, and that’s how we filmed it. Luckily, the story is told in an episodic format which gives us more options, but we haven’t made a final decision yet on what the film’s structure will ultimately be. 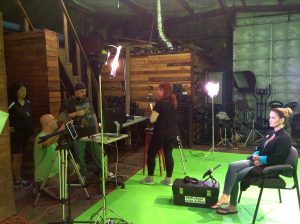 As for the rest of the fan film guidelines, the answer is that we are intent on keeping to the spirit of them, even though CBS representatives have said publicly that they are guidelines, not laws. I will say right up front that I have no interest in making a profit on The Romulan War. The film is a labor of love and my only goal is to tell this story which I think honors the legacy of Gene Roddenberry and his fellow creators. If I could fund the entire thing myself, I would. But I’m not wealthy, so I am asking for help from fans to help us get TRW over the finish line.

JONATHAN – Your Indiegogo campaign says you’ve already shot most of your actors’ parts in front of green screens. Can you tell us about your cast? Are these real actors or just fans that you recruited?

MARK – They are all trained actors based in Nashville. I worked with Marc Mazzone (he plays the Romulan Praetor) onThe Crusader, but the other folks all came in through auditions and agency recommendations. We’ll be revealing more about the cast over the next few weeks, but they are all immensely talented actors who I feel lucky to have gotten to work with.

JONATHAN – Who made your costumes and did your make-up? And is there anyone else on your production team you’d like to mention? 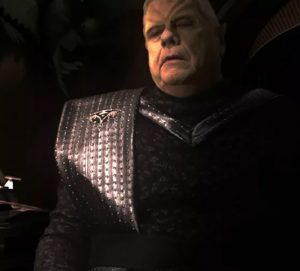 MARK – The costume designs for our Romulans were by the amazing Sheri DiGiovanna, who also did makeup duties while we were on set. The other costumes were off the shelf. We had a pretty small crew which includes Denise Kerlikowske, who DP’d on this show and on The Crusader back in the day. Denise is also putting in editing duty, as well, because she knows that I will lose my mind if I have to edit the whole thing! Another filmmaker pal here in Nashville, Elvis Wilson ran camera and we filled out the crew with Aubrey Bowlin and my 12-year-old daughter Sophia, who did pretty much everything else.

But of course, I don’t want to bury the lede… I am absolutely thrilled to have Samuel Cockings from Trekyards supervising and producing our visual effects! Sam has been great to work with and obviously he knows Star Trek and ships better than the rest of us mere humans. While we do have some other FX artists helping out, Sam is supervising them in addition to all the work he’s doing on modeling, animation, compositing, original artwork, and whatever else needs doing.

JONATHAN – Tell us more about what still needs to be done.  You say you’ll need $10,000 to do it? How do those costs break out?

MARK – The biggest cost at this point is post-production. We’ve just completed one of our major sequences and it contained over 40 CGI shots! That includes the storyboards that I did, the visualizations and animating that Sam did, the other folks he had on his team building and refining theCGI models, and the compositing. Then there are the virtual sets and all the design and planning that went into those. But we still have a long way to go to finish, and if fans want to see the quality they’d expect from say, Enterprise or Deep Space Nine, it’s going to take time to get it right.

I have been able to get some good commitments from some great people locally on scoring, sound design, and editing—and frankly, that’s the only way we’re even able to keep it at $10K. If folks weren’t working on this as a labor of love, the budget would easily be twice or three times what it’s been. That’s the same thing that happened to me on The Crusader, by the way. The Crusader looks like a $60,000 film but we shot it for less than $3K thanks to some very committed and motivated local folks who love independent filmmaking.

JONATHAN – What happens if you don’t make your goal?

MARK – Obviously we’d have to cut some major corners and tell a smaller story or rely more on talking heads and narration instead of the great visuals But The Romulan War is coming out no matter what. The question I think fans should ask themselves is: Do I want to see a story at a high quality level that covers the “origin” of the Federation? Did I like the sweeping narrative arc of the Dominion War on DS9? If the answer to either of those questions is yes, then please contribute to TRW and we will “make it so!”

JONATHAN – Of course, I should balance out my previous question by saying that, of course, you’ll make your goal! And when that happens, how long until we see The Romulan War on YouTube?

MARK – Well, if we hit our goal, life gets easier and we can move at warp speed to finish the project. We hope to have The Romulan War completed and ready for your viewing pleasure before the end of this year.

It’s worth noting, by the way, that we will be releasing “bonus content” through our website in mid-April. It’s our “Memory Alpha Portal” and will include the usual behind-the-scenes stuff but also various “newly-discovered journals” from officers who served in the war…which are basically audio dramas that fill in some gaps of the finished film. We’ll have some other surprises as well, but you have to be a backer of at least $10 to get access to Memory Alpha.

JONATHAN – That sounds really cool!  I can’t wait for that stuff to get posted.  So finally, what are you planning to do next after this project is finished?

MARK – Well, Sam keeps trying to talk me into doing another Trek fan production after we’re done with TRW, and I do have plenty of ideas for Trek stories left over from when I pitched to DS9 and Voyager back in the 90’s. But I also have some other scripts in development that aren’t related to Star Trek or science fiction at all. Right now, my main focus is for us to get the resources we need to finish The Romulan War and get it out there to the fans. It’s going to be a fun ride!

Please consider making a donation to the Indiegogo campaign for The Romulan War…or at least pass along the link to your fan film friends: