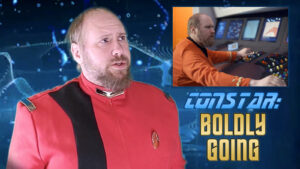 My first reaction was, “FOUR HOURS???? Vance, are you kidding me?” He wasn’t kidding.

And as I began watching a courtesy viewing copy of the documentary CONSTAR: BOLDLY GOING, I began to understand why. I’d sat through over an hour before taking my first break and finished it off in its entirety over the next few days. The behind-the-scenes film is surprisingly watchable, but more importantly, it represents the very heart of what makes our “little” fan film community so unique and special.

And the reason for that is that VANCE MAJOR also represents the heart of our fan film community. At a time when Star Trek fan films were getting bigger, bolder, and much more expensive—so much so that CBS and Paramount instituted a set of guidelines to curtail the “space race,” as they called it—Vance came out just as boldly and went both small and cheap! He wasn’t trying to compete with the big guys or even to send some kind of message to them to spend less on their productions.

No, instead Vance was simply saying, “Hey, I’d like to show you my stories, too, but I don’t have any money. So I’m just going to do my best, and if you like what I make, great. And if you don’t, that’s fine, too. I’m doing it for me.”

And that was about 150 fan films ago!

In the years since Vance first portrayed the character of Erick Minard, Chief Engineer of the STARSHIP VALIANT, he’s worked with nearly every fan filmmaker in the community, having inspired many of them to “just go for it.” If Vance didn’t care if there was a cord visible in the doorway in the background of a shot, or if half the lights on the bridge were out, or the sound was bad or the uniforms didn’t quite fit the actors, why should anyone else be bothered by it? These are FAN films, and they’re made for FUN.

Now, as Vance prepares to pull the U.S.S. Constar into space dock one final time and complete his career creating Star Trek fan films, he’s decided to once again go where no fan has gone before and produce a documentary about not just one or two fan films but an entire MAGNUM OPUS of work…viewed not solely through Vance’s own eyes but through the thoughts, memories, and experiences of those he has worked with over the years…including me and dozens of others.

I thought about interviewing Vance as he brings this epoch of his life in for a landing. But anything we discuss would only pall in comparison to the release of his 4-hour documentary, which will premiere on Sunday, July 3rd at noon central time. Here is the link…

So instead of a full-on interview, I’ve simply asked Vance to say a few words, almost like a director introducing his new film to the audience before a screening…

The documentary means a lot to me. I came into fan films almost 9 years ago, and it’s been a huge part of my life. I put out my first fan film exactly 6 years ago, and now have been involved with close to 150 fan films. It’s one of those things that I have a lot of love for, both with the work involved and with the people I make it with. I think that’s clear with what we have put out.

I wanted to show an in depth view of what making a fan film was like, the good and the bad. A lot of people like to harp on things, but even on the low budget films, a lot of work goes into it. So I went to my friends and asked who would like to be involved in this documentary project.

Almost everyone was available. Some couldn’t make it work because of time. But this was a huge undertaking. And I knew this from the get go.

I didn’t care about the run time. I had a list of questions that I wanted each person to answer, and I gave them the questions. To me, the length of the final production was not an issue, as people can always pause the documentary and come back. No, this was something that needed to be told with respect to the people doing the telling. It’s their story; it’s their time to shine. This is something we have built together, and I wanted to make sure they got their chance to be recognized, properly, before I finally retire from the Constar series.

We have about 23 fan film people who speak in this lineup, each with their own personal stories and takes on things…ranging from MICHAEL L. KING (STARSHIP VALIANT) to ALEC PETERS (AXANAR) to JOSHUA IRWIN (AVALON UNIVERSE) to CHRIS HUNTER (son of JEFFREY HUNTER—the original Captain Pike). The documentary also includes one of the final things recorded by the late and deeply-missed MICHAEL SYLVESTER (MELBOURNE) before his untimely passing from COIVD-19.

So many other legends in the fan film community appear, as well, and I won’t ruin the surprise. But if you are a fan of the Constar series or just fan films in general, you will be excited. And we don’t limit ourselves to just the Constar mainstays; we opened our documentary up to our recurring guests that have helped build the Constar series.

So this is something that is truly one of a kind. I honestly feel that, as I have only a few films left before I retire, having this as one of the few things left for my legacy, I can walk away with a smile on my face. I set out and accomplished what I always wanted to do. I added to a universe I love, I made some friends whom I adore to this day, and I’ve helped a lot of people with their dream of making their own films.

What’s there not to be happy about? I feel as though I’ve walked among legends!