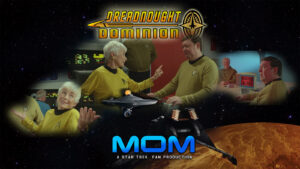 Ya just gotta love the folks at DREADNOUGHT DOMINION. Well, you don’t have to love them, but it’s hard not to! They spread such fun and joy through their fan films.

You would think that a fan series set on board a three-nacelled dreadnought-class starship would involve lots of battles and intense, serious action. And you would be wrong. Out of all of the most active ongoing Star Trek fan series, Dominion is one of the ones that takes themselves the LEAST seriously. Although they have had a handful of dramatic releases, they’ve also had a whole bunch of good, wholesome, fun-for-the-whole-family style episodes that just make you want to laugh and smile.

Seriously, how cute was that??!

Yeah, I know. Nothing like that would REALLY happen on a Federation dreadnought starship …or any starship, most likely. And the repercussions of a cloaked Klingon scout ship deep within Federation space could lead to interstellar war. And to that I say: “Stop complaining and go call your mother and tell her that you love her!” (My apologies to any out there who have lost their mothers, but if you know any mothers in your life, send them a link to this wonderful vignette and put a smile on their face.)

Speaking of smiles, I just couldn’t wait to ask GARY DAVIS, longtime Dominion showrunner and Captain Jason Brousseau himself, some things about this precious piece of production positivity… 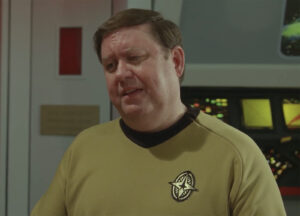 JONATHAN – Welcome back, Gary. It looks like you all had a lot of fun with this latest release.

GARY – Oh, this was a VERY fun film to shoot as well as to edit together!   The stars of this outing were JOAN SCHUERMEYER and BRIAN HOLLOWAY, who play Captain Brousseau’s mother and uncle.   We had a huge supporting cast, and we enjoyed having a busy bridge again, manning all the stations and giving screen time to as many folks as we can who come by to visit and participate in Dreadnought Dominion.  Of course, we can only write about a few, and the top three actors, and the top two crew we just have to write about!

JONATHAN – Well, I just HAVE to start by asking you about Joan. She was priceless! Is Joan as adorable in real life as she is one screen? 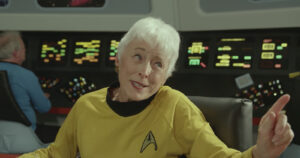 GARY – Oh, absolutely! Joan is a heartwarming lady to be around, and an outstanding actress!  From moment ONE on set, we knew that she was the perfect choice for this role.  Joan was the life of the shoot and did an amazing job as Brousseau’s Mom.

You might recognize her from the 2009 comedy film Zombieland with WOODY HARRELSON and JESSE EISENBURG. You can see her brief appearance starting at the 33-second mark of this YouTube clip. She’s got a lot of experience. She also got her brains bashed out in a Halloween movie. She usually is an extra.

JONATHAN – How did you find her? 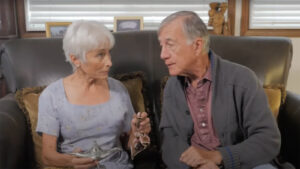 Joan Schuermeyer and Neil Burghard in “The Avarice Snare” (2017)

GARY – About five years ago, Joan was in a production that RANDY WRENN, Dominion‘s co-showrunner and all-around miracle-worker, produced called The Avarice Snare with another actor, NEIL BURGHARD. Randy is friends with Joan, Joan is friends with Neil, and Randy really wanted to work with them again. So he wrote “Mom” specifically to have parts for each of them to play—Brousseau’s mother and step-father.

However, shortly before our shooting date, after everyone had scheduled time to come to NEUTRAL ZONE STUDIOS in Kingsland, GA, Neil got a PAYING gig and had to bow out. That led us to ask Brian Holloway to play the role. But Brian is not as old as Joan, and he didn’t think that the audience would believe they were married, so we changed his character to my uncle so my mother could retain her married name Brousseau and not a remarried name. 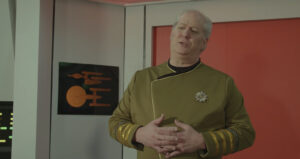 JONATHAN – Let’s talk about Brian next. He used to be very involved in STAR TREK: PHASE II. The most recent thing he did in Trek fan films was voicing Captain Stiles in THE ROMULAN WAR, PART 1 back in 2020. How did he end up getting involved with Dreadnought Dominion?

GARY – We had been corresponding with Brian in the past. He is also from the Charlotte area where Randy lives. Randy and I just asked him, and he said yes. It’s great when we have folks who take notice of us. When an opportunity to cast them comes up, they jump at the chance. We are very fortunate!

Brian was a joy on set bringing life to Captain Brousseau’s quirky, yet very commanding, uncle.  His talents for ad-libbing and character development on the fly can be seen in his performance.  His interaction with Joan and Captain Brousseau (me), was both natural and very entertaining.

JONATHAN – I noticed that Brian is wearing the same unique style of admiral uniform that actor ROBERT WITHROW used to wear on Phase II when he played Admiral Withrow. Is that the actual same costume, or did Brian make a new one.

GARY – Brian says it’s a new one that he made himself…with the blessing of JAMES CAWLEY from Phase II. Brian is a master costumer. His other outstanding cosplay creations are as a Klingon and a Romulan. 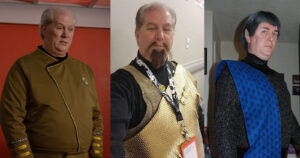 JONATHAN – Speaking of Klingons, THOMAS DAVID ARGANTE appears for the second time as a Klingon in one of your films. The first time was the pilot episode of PROJECT: RUNABOUT. He also appeared as Admiral Parmley on a view screen in THE PASSENGER WITH BAGGAGE episode of Dominion. Now, Thom lives in the Netherlands, correct? 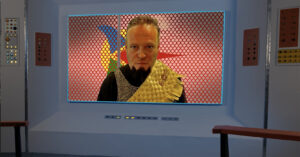 Thomas David Argante from the Netherlands (by way of Qo’noS)

GARY – Yes, he does. We met Thom on Facebook through our common interest in Star Trek props.  We invited Thom to appear in Project Runabout as a Klingon Captain, and when “Mom” was written, we thought of NO ONE else but him for this new outing!  Since Thom hails from the Netherlands, he films his scenes via green screen.  He is also a master cosplayer, and his Klingon Captain garb is simply outstanding.  We will be featuring Thom in the future, possibly in a stand-alone Dominion Media production centering on him and a few more Klingons. Ohhhh, Brian Holloway, dust off your gold sash!

JONATHAN – Moving from the front of the camera to the back, I noticed an unexpected name in your credits: JOSHUA MICHAEL IRWIN as Director of Photography/Camera Operator. Usually, Josh hangs out over in the AVALON UNIVERSE and shoots in Arkansas at WARP 66 STUDIOS there…although I recently interviewed him and RAY TESI because Josh directed the just-released episode “DOOMSDAY” of TALES FROM THE NEUTRAL ZONE on the TOS sets in Kingsland, GA where you film Dominion. So how did you guys wind up with Josh shooting for your latest fan film?

GARY – Our regular DP, LARRY FLEMING, was unavailable the weekend we were going to shoot. He was actually traveling all the way in the other corner of the country in Oregon with his son. 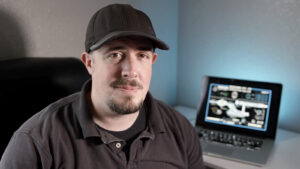 But we had ALWAYS wanted to work with Josh, so this seemed like the PERFECT opportunity to ask, and he said yes…IMMEDIATELY!

Dreadnought Dominion has had some awesome DP’s in every outing, and they have raised the bar on our production value.   This latest production does just that and THEN some!  Josh’s attention to detail with each and every shot can be seen in lighting, framing, and even the background!   We were in awe of his classic Trek knowledge when he was setting up shots. One fun example is that he set up the “slash” lighting on Joan’s face JUST like on shots of Captain Kirk in the episode “Balance of Terror” from the original series.   It’s small details like that which often go unappreciated when watching a production because it just looks “RIGHT” and is just what you’d expect from watching Star Trek.

JONATHAN – I hear ya on that! I chatted with Josh once, comparing cinematography to graphic design (which I’m trained in and have done professionally). In both disciplines—his and mine—if we do our jobs properly, no one will notice. It’ll just seem “right,” as you say. It’s when we screw up that people notice!

But someone who NEVER screws up is your VFX artist extraordinaire, the Honourable Mr. SAMUEL COCKINGS of Great Britain. And I see that he did his usual outstanding job once again.

GARY – Oh, totally! Even if Sam isn’t ever with us in person, he is with us always in spirit.  Sam has the monumental task of taking our footage and creating spectacular CGI shots that have to seamlessly blend with the action.  Our job on set is to describe what we as writers, directors, and producers see in our mind…and give that vision to the actors to react to when giving their performances.  Sam’s job is to make those visions come to life and jump out at the viewer.  And with every production, Sam hits the target with the bang and brilliance of a photon torpedo exploding!  While the acting is the main course to our meal, Sam’s CGI shots are the appetizers, seasoning, and often a very sweet dessert to round out the offering to the viewer. 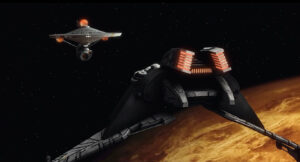 JONATHAN – And now I’m hungry…thanks for that, Gary. So what’s coming down the pike (or should I say Pike?) with Dreadnought Dominion?

GARY – Our next release will be a full length episode called “THE REPLACEMENTS” sometime this fall. Then we’ll be shooting another spin-off in November for release in early 2023.

GARY – Everyone gave us their “A” game and produced a light-hearted, sweet, and comedic outing.   Dreadnought Dominion likes to exit the highway of traditional storytelling and take the back roads for an “out of the box” tale, and “Mom” was just that.  We hope our fans are enjoying the trip!