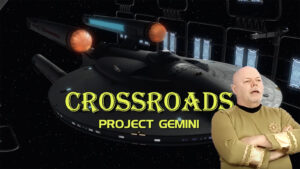 Correction: they’re not casualties. They are…list them as “missing.”

That’s the way it seemed back in 2016. Frank Parker, Jr. had become a prominent name in the fan film community. Appearing in THE ROMULAN WARS fan series in 2012, he had gone on to help build sets that were used for both STARSHIP FARRAGUT and STAR TREK CONTINUES. In fact, Frank briefly appeared in the penultimate episode of Farragut, “The Crossing.”

But what Frank was really becoming known for was the debut of a new fan series filmed on the Farragut/STC sets in Kingsland, GA: DREADNOUGHT DOMINION. Frank played Commodore Sam Grissom of the titular starship, as bald as Jean-Luc Picard and plagued by a troubled past. Two episodes, “Haunted” and “Anchors Aweigh,” promised another fine addition to the world of Star Trek fan films with Frank as showrunner. But then, seemingly without any warning, Frank completely disappeared from the fan film community without a trace! POOF!!!

Fortunately, Dreadnought Dominion found a way to carry on without their lead actor and creator. GARY DAVIS and RANDY WRENN took over the series, releasing nearly a dozen follow-up episodes, including a crossover with STARSHIP VALIANT titled “Chain of Command,” which dealt with the aftermath of Commodore Grissom’s sudden departure.

As quickly as he disappeared, Frank reappeared in the Star Trek fan film world, almost as if he’d simply beamed down somewhere and beamed back half a decade later. And although Dreadnought Dominion had moved on, Frank appeared in an episode titled “The Passenger with Baggage” to tie up many loose ends and bring closure for most of the characters, including his.

But Frank’s return didn’t stop there. Frank has since formed an alliance, of sorts, with VANCE MAJOR of the MINARD and CONSTAR saga of fan films, partnering Frank’s FILK FERRET PRODUCTIONS with Vance’s NO BUDGET PRODUCTIONS to create multiple fan films. These have included the following for CONSTAR COMPLETED episodes released between March and June of this year:

If you don’t want to watch all of the above, Frank and Vance compiled a “highlight reel” titled THE STORY SO FAR – GRISSOM ADVENTURES. It serves as a user primer…

A primer for what, you ask?

Well, even though Frank Parker, Jr. had made his peace with his old buddies at Dreadnought Dominion and appeared in multiple Constar episodes and other assorted releases, he had still not gotten Star Trek fan films completely out of his system. Just the opposite, in fact!

Absence had made Frank’s heart grow even fonder of fan film production, and after a five-year “sabbatical,” Frank decided to launch his second fan series, a brand new set of stories set on board the brand new Gemini-class starship, U.S.S. Harrison.

The new fan series, CROSSROADS – PROJECT GEMINI debuted earlier this year in May with its pilot episode “The Gemini Project.” Take a look…

But wait, there’s more! Over the past several months, Frank has again teamed up with Vance (and a bunch of others from around the globe) to launch a weekly video podcast called CRITICAL, NOT CYNICAL…which has already released over 25 live podcasts ranging in length from one to two hours each! The podcast looks as fan films with a critical eye, but with a focus on CONSTRUCTIVE, not destructive, feedback.

Insulting and tearing apart fan films is easy because the people creating them typically don’t have the resources or skills to produce Hollywood-quality cinema. Fans do what we do out of love, and such dedication and passion should never be mocked. So instead, this podcast approaches each fan creation with respect and dignity and simply looks at ways the creators might make improvements on their next efforts. Many times, the creators themselves are invited to participate, as JOSH IRWIN and I did when Frank and Vance reviewed INTERLUDE.

Okay, that’s a pretty rambling preamble, but Frank Parker, Jr. is a man who needs an introduction. And now that we have a good idea of who he is, let’s take some time to get to know Frank a bit better and find out why he left fan films for five years, and more importantly, what made him come back again. Oh, and when you watch the following video interview, you’re gonna want to stick around for a segment that runs from the 43 minute mark to 57 minutes when Frank talks about ALL of his Star Trek uniforms and costumes. It will blow your mind how many he has, trust me…