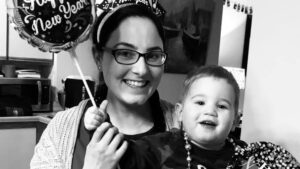 JOHN ATKIN has just lost the love of his life and the mother of his three-year-old son EDWARD, his beautiful wife of three-and-a-half years, MIRANDA GERMANI. She died on Saturday, October 2, from complications caused by Crohn’s disease, a condition involving inflammation of the digestive tract which can become potentially very serious in certain circumstances, as it did for Miranda.

I am reporting on this for two reasons. The first is that both John and Miranda should be considered part of the fan film community, John as co-showrunner (along with STAN WOO) of the long-awaited YORKTOWN: A TIME TO HEAL, featuring footage filmed back in 1985 of GEORGE TAKEI playing Sulu and actor JAMES SHIGETA as Admiral Nogura. John helped Stan restart the production in 2010 after a nearly two-decade “pause,” providing resources to create new scenes that would never have been possible back in the 1980s. Some of those scenes were filmed at JAMES CAWLEY’s Retro Studios in upstate New York, and Miranda had a small cameo as Dr. Amanda Cruz. 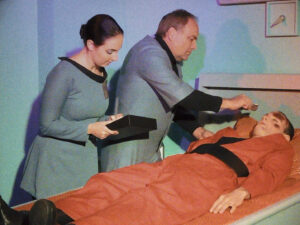 Miranda Germani as Dr. Amanda Cruz in the upcoming Yorktown: A Time to Heal

The other reason that I am reporting on this is because I consider John Atkin to be a friend, and as a now-single father of a three-year-old who will, tragically, barely be able to remember his wonderful mother, John needs our help.

John’s sister-in-law, ELENA GERMANI, along with friends from Humbler College in Toronto—where Miranda did post graduate work—has set up a GoFundMe to help pay for Edward’s post-secondary (college) education when he graduates high school in 15 years.

Elena’s comments on the GoFundMe page explain the reason for the campaign:

Miranda deeply valued education. After obtaining her degree from McMaster University, she carried on her studies at Humber College, York University, and the London School of Economics and Political Science, where she graduated with a MSc in Health Economics, Policy and Management.

We know she would want her son Edward, now three years old, to have access to opportunities provided by post-secondary education. We set up this GoFundMe for Edward so that his dad John has a little less to worry about during this incredibly difficult time.

Miranda offered so much to the people and causes she loved — and there were many. In fact, she received the Sovereign’s Medal for Volunteers, presented by the Governor General of Canada, in recognition of her commitment to community.

This is an obviously painful time for John, coming just as he was putting the finishing touches on Yorktown—“polishing up the music and sound design,” as he posted on the Yorktown Facebook page back in August. But now, John has other thoughts and feelings to deal with, and perhaps we can help ease his grief with just a little financial help. As I type this 84 people have already donated $9,130 in just three days, including $50 from me.

If you’d like to give something for young Edward, here is the link…

And here are some photos of Miranda, John, and Edward from their precious-but-way-too-brief time together…