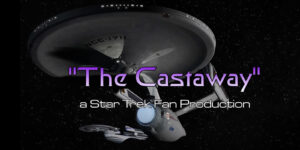 Before there was ever a Fan Film Factor website, I was composing weekly fan film blogs over on the AXANAR website as a “guest writer,” just dipping my own toes into this ever-expending ocean of content. And back in August of 2015, with just three completed blogs under my belt, I tackled my first interview with a fan filmmaker (and my first-ever two-part blog) when I chatted with RANDY LANDERS of PROJECT: POTEMKIN.

I don’t say that merely because almost seven and a half years have passed since I published that blog. Heck, the Earth is 4.5 billion years old…seven years is nuthin’! Although back then, there was no Axanar lawsuit yet, no fan film guidelines, and Project: Potemkin was the ONLY fan series that Randy was producing from his home in Albany, GA.—with “only” 26 episodes released thus far (they would finish with nearly 40)! Randy had begun the fan series four years prior in 2011 and, by 2015, was knocking out new episodes nearly once a month!

Since then, Randy would move twice—once to Pelham, Alabama and then more recently to Lexington, Kentucky. And wherever he went, he would recruit more actors and production people who wanted to help make Star Trek fan films! It wasn’t long before there were way too many folks to limit to just ONE fan series. So POTEMKIN PICTURES went on to launch eleven other fan productions, some one-offs and others releasing multiple films under various “creative groups” including: STARSHIP TRISTAN, STARSHIP DEIMOS, BATTLECRUISER KUPOK, STARSHIP ENDEAVOUR, STARSHIP TRITON, HOSPITAL SHIP MARIES CURIE, STARSHIP ALEXANDER, STARSHIP WEBSTER, STARSHIP CALIBORN, SCOUT SHIP QAB’ELTH, and FIREHAWK.

(You can watch all of their releases from their website.)

Project: Potemkin would release their final epilogue episode, “ROOM SERVICE,” in October of 2016, a little over a year after our interview and after moving to Alabama. At least, we all thought it was their final episode. At the beginning of December of 2022 (six years later), a brand NEW episode of Project: Potemkin was released titled “THE CASTAWAY,” with former series lead JEFFREY GREEN reprising his role of Captain Alec Grigory—along with a few other familiar faces from Potemkin‘s original 6-year run. Take a look…

As you can see, the fan film ends with an announcement that Project: Potemkin will be returning in 2023…which will bring the total number of active Potemkin Pictures creative groups back up to five. So expect to see a LOT more fan films!

As if to save me time, Randy Landers was kind enough to post the following behind-the-scenes write-up of the episode onto Facebook, meaning I simply have to copy-paste the following for you…

In 2015, we filmed an episode of Project: Potemkin, “Callie.” And we hadn’t quite finished the location shoot (it was cold and windy in Mexico Beach that day), but word came suddenly and unexpectedly that we were relocating to Birmingham, Alabama.

We quickly wrote a script about the destruction of the Potemkin, filmed it, and without much notice, had a fitting end to the series with “DESTINIES.”

With barely any time to pack up the studio, we moved to the suburb of Pelham AL, came back and salvaged two truckloads of materials from Studio 2, and went back to Pelham to set up house and to create Studio 3. Only a handful of actors were able to transition with us to Birmingham/Pelham and they appeared in Starship Tristan and Starship Deimos.

Plans for “Callie” were set on what we thought was permanent hold. Footage was saved and digitized, and we ended up using some of the footage from the teaser of “Callie” as the epilog for “Destinies.”

Five years later, and we moved again, this time to Lexington KY and in a house that had a full basement capable of serving proudly as Studio 4.

Even fewer actors from Birmingham followed us up to Lexington, but those that did comprised the crew of the Starship Deimos.

Tristan, Marie Curie, Kupok, Endeavour, and Alexander were let go. We had footage from a partially filmed Starship Tristan, and Rick Foxx was able to assemble it into “36 HOURS” during the COVID epidemic.

We had created Starship Webster here in Lexington with local fans and actors, but the COVID protocols pretty much shut us down.

I looked for something to do, and I thought back to “Callie” and assembled the edit. DAVID EVERSOLE and I bounced around a few ideas and then came up with a script that utilized the footage. We worked out some details with JEFF GREEN, CHRISIN WOODS, MJ JOHNSON, JACK ZUMWALT, and WILLIAM SEARCY. My wife Linda and I made a road trip to Albany, GA (nine hours from Lex)and shot the footage we needed to complete—well, mostly complete—“Callie,” which had been transmogrified into “The Castaway.” We missed a few things, and Jeff Green managed to get those shots to us. Actors were able to record their lines by phone (and yes, you can probably tell which ones!). Some actors we’d totally lost track of. Others were quite happy to help. TERRELL MANASCO shot the tribunal sequence at the end with three actors from Birmingham.

So we’re delighted to present to you a hodge-podge of a resurrected episode of Project: Potemkin. At least five cameras were used in this production, none of them at the same speed or resolution. And I don‘t even want to think about the mics. But this one is still a work of love, just like all of our work has been, is, and will continue to be.

We hope you enjoy it and forgive us.

And yes, Project: Potemkin is back.