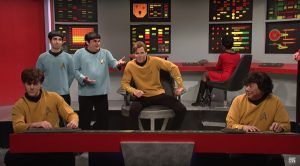 Does a SATURDAY NIGHT LIVE sketch count as a Star Trek fan film?  Aw, who cares?  This is still a really fun story…

The earth date was May 29, 1976, and Saturday Night Live (SNL) was about to air the 22nd episode of their first season.  The cutting-edge sketch comedy series had become a late night TV hit, and Elliott Gould was the host for that week’s show.  The writers had come up with a clever skit (that has since become a true classic) entitled Star Trek: The Last Voyage of the Starship Enterprise.  The legendary JOHN BELUSHI played an over-the-top, Shatneresque Captain James T. Kirk.  CHEVY CHASE played a perfectly deadpan Mr. Spock.  And the awesome DAN AYKROYD played both Dr. McCoy and provided a voice-over of Scotty on the com from Engineering.

During the skit, the Enterprise is chased by a 1968 Chrysler Imperial with a tinted windshield, registered to a 20th century corporation known as “NBC” (which, according to the ship’s computer, used to manufacture cookies).  The starship is boarded by Elliott Gould and Garrett Morris, two executives from the network announcing that Star Trek has been canceled due to low Nielsen ratings.  Hilarity ensues…mostly thanks to the brilliant performances of the main actors.

There was only one problem at the time: SNL didn’t have an Asian comedian or actor available to play Sulu.  Rather than leave the helm seat empty (which wouldn’t work anyway, as Kirk orders evasive action during the sketch), the producers grabbed one of the production designers, a Japanese-American named AKIRA YOSHIMURA, to play Sulu.  There also wasn’t a black woman available to play Uhura, so a production assistant named DORIS POWELL was put into a red uniform (with the wrong rank braids).  Both people were given a bit of of dialog to speak, although Yoshimura got nearly a dozen lines (and flubbed two of them)…but hey, at least he was willing to be on camera in front of millions of people!

Flash forward to May 6 of 2017.  Actor CHRIS PINE (who plays James T. Kirk in the rebooted Star Trek movie series) was the SNL host, and the writers decided to once again feature a Star Trek skit.  There was only one problem: it was four decades later and Saturday Night Live STILL didn’t have an Asian comedian or actor available to play Sulu!

Now, this probably wouldn’t be so embarrassing for SNL if it was simply a case of the current cast of regulars not featuring an Asian comedian at the moment.  After all, SNL changes players regularly, and there might not always be an Asian cast member in the mix.  Yeah, if only…

It turns out that, in 41 seasons of SNL, there has NEVER been a regular Asian cast member!  Seriously!  In fact, there have only ever been three HOSTS of Asian ethnicity over the four decades of show: Jackie Chan, Lucy Liu, Aziz Ansari.  (Vanity Fair’s website just featured an article critical of SNL for this very thing.)

That being said, SNL still needed a Sulu for this 2017 skit with Chris Pine.  The sketch, Star Trek: The Lost Episode oscillates between clever and cringe-worthy, depending on your threshold for seeing Spock’s crass, wise-cracking half-brother “Spocko” from Queens, NY (played by the over-the top BOBBY MOYNIHAN) steal the show from Pine (channeling his inner Shatner)…along with KENAN THOMPSON doing a spot-on Neil DeGrasse Tyson introducing the lost episode.

And believe it or not, after four decades, guess who was still working for the SNL production design department!?!  Yep, good ol’ AKIRA YOSHIMURA… a bit older, a little heftier, and still delivering lines like someone who was never hired to actually work in front of the camera. 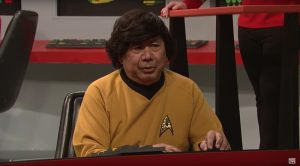 AKIRA YOSHIMURA is back to play Sulu…41 years later!

In fact, his drone-like delivery of his one line, “Yeah, we’ve never seen him before; it’s weird,” left multiple actors on screen at that moment (including Chris Pine himself—see the still image at the top of this blog entry) trying desperately to keep from breaking out in a laugh.

As it turns out, Yoshimura has actually played Sulu two other times during the long run of SNL.  Back in 1986, with Star Trek IV: The Voyage Home hitting theaters, William Shatner himself was the host that week during SNL‘s 12th season.  The obligatory Star Trek sketch that episode was a tongue-in-cheek look ahead to the next movie, Star Trek V: The Restaurant Enterprise.  It was pretty funny (although still cringe-worthy in places) and featured, in addition to Shatner playing Captain Kirk, the talented KEVIN NEALON as Spock, the late PHIL HARTMAN doing an a very impressive Dr. McCoy, VICTORIA JACKSON, JON LOVITZ, and a delicious performance by the always-dynamic DANA CARVEY playing Khhhhaaaaaannnnnn!!!  And with nearly a full minute of screen time, a half-dozen lines, a few extra pounds (which Kirk notices), and still wearing those eyeglasses, Akira Yoshimura returned to play Sulu a decade after his first appearance during season 1. 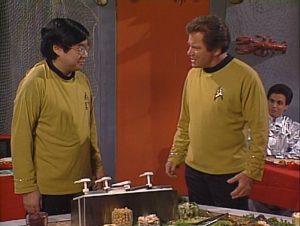 YOSHIMURA again as Sulu in 1986 playing opposite WILLIAM SHATNER as Captain Kirk.

(That was also the SNL episode that featured the unforgettable “Get a Life!” comedy skit that still reverberates throughout Star Trek fandom.)

In late 1994, Yoshimura returned for a third stint playing Sulu, this time in an absolutely awful Star Trek sketch called Love Boat: The Next Generation.  With the seventh Trek film, Generations, hitting theaters, Patrick Stewart was the host that week, and of course, that meant doing a TNG parody.  What made the writers ever think that a mash-up of The Next Generation and The Love Boat would actually be funny…well, SNL doesn’t always hit a home run (or even make contact with the ball) for many skits.  But Patrick Stewart did give it his all, and with just 10 seconds of screen time, one line, his old TOS uniform (in a TNG sketch???), and those distinctive eyeglasses, there was Yoshimura again! 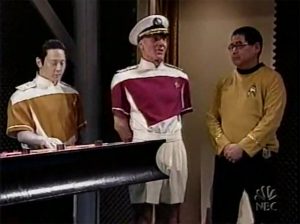 ROB SCHNEIDER as Data, PATRICK STEWART as Captain Picard, and AKIRA YOSHIMURA in his third appearance as Sulu in 1994.

But that was it for Sulu for the next 23 seasons!  Not that there were many opportunities.  Star Trek sketches appeared few and far between after that.  In 2009, there was a short segment on Weekend Update featuring Chris Pine, Zachary Quinto, and a surprise cameo by Leonard Nimoy… 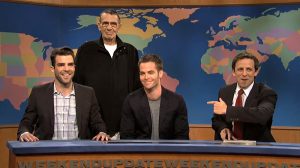 And then in 2015, a day after the death of Leonard Nimoy, SNL featured an amusing sketch titled “Emergency Room” about a doctor (played by Kenan Thompson) who must come in to the E.R. on his day off…rushing in from a Star Trek convention in full Klingon make-up, dressed as Worf.  The awkwardness of having a doctor not only playing Worf but really getting into character in the E.R. provides for some pretty funny moments. 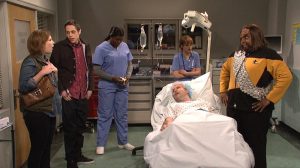 After the sketch concluded, SNL put up a brief tribute screen honoring the passing of the beloved actor who played Spock… 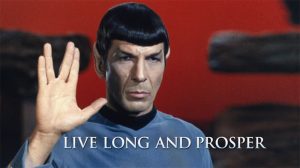 SNL’s tribute to Leonard Nimoy a day after his passing