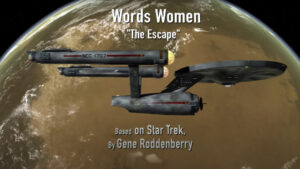 I first heard about a fan film called WORD’S WOMEN a few years ago. At the time, I knew KENT “WORDS” EDWARDS as a fellow involved in the now-defunct STARBASE STUDIOS, a group of TOS sets originally located in Oklahoma City, OK.

For over half a decade, those wonderful sets—which included a 360-degree TOS bridge rescued from decay from the fan series STARSHIP EXETER, a transporter room, partial sickbay, corridor, and part of a briefing room—lived rent-free in a “no frills” metal building…without heat, air conditioning, or even a bathroom. But with free rent, who cared??? Countless Star Trek fan films were shot there, including STARSHIP VALIANT, STARSHIP GRISSOM, THE RED SHIRT DIARIES, the FEDERATION FILES, and a whole bunch of MINARD and early CONSTAR CHRONICLES (to name a few!).

But then the generous owner of the building sold it, and the new landlord wasn’t interested in having a bunch of Trekkies use 50% of his new space rent-free. So the TOS sets were forced to be moved…well…somewhere.

Ultimately rushed to find them a new home, the owner of an abandoned amusement park called Dogpatch in northern Arkansas offered some temporary storage space. The sets were safe (at least from the elements), and a few additional fan films were shot at the new location, although electricity issues allowed only one monitor station to be lit at a time.

Meanwhile, there were multiple “owners” of the TOS sets. I put the word in quotation marks because so many people had a hand in rebuilding those sets, supplying labor and materials, and helping to care for them, that the Starbase Studios TOS sets arguably belonged to everyone involved. But four people were ultimately playing a bit of tug-o-war, and “Words” was one of them. Eventually, Words let go of the rope, stepping aside to manage a business that would serve to simply book fan productions on the sets, leaving the other three fellows—GLEN WOLFE, SCOTT, JOHNSON, and GLENN MILLER (now deceased) to argue ownership.

VANCE MAJOR and I tried to help negotiate an agreement by the various parties to figure out how to share the sets, but that ended up being surprisingly more complicated and challenging than either of us ever imagined it would be. However, while those discussions were going on, “Words” decided that Starbase Studios needed a “commercial” to show fans how easy it could be to create a Star Trek fan film using those sets, and he assembled a “who’s who” group of folks who had made frequent use of the sets in the past…including MICHAEL L. KING playing his character of Bishop from Starship Valiant and Vance Major playing (of course) Minard…three Minards, in fact!

But then everything fell apart. The parties went their separate ways, the sets were eventually auctioned off (what was left of them, as they’d been unattended and in need of repair), and it seemed the commercial was now all for naught.

Perhaps not, though. In early October, “Words” finally released Word’s Women – The Escape. Take a look…

Now obviously, there are some quality issues with this fan film—especially the sound. And if a viewer wants to find fault with the vast majority of fan-produced videos, there will always be low-hanging fruit to go after.

But in this case, I’d like to ask you to look beyond that to what this film represents. As “Words” says in the following video interview (which is definitely worth watching), he preached encouragement to many, many fan filmmakers who had stalled in their efforts and were thinking about giving up. “No,” he’d say, “you need to finish what you started. You need to complete your fan film.” So when it came to his own efforts, even though it was only ever intended to be a commercial, “Words” practiced what he preached. He finished his fan film and released it.