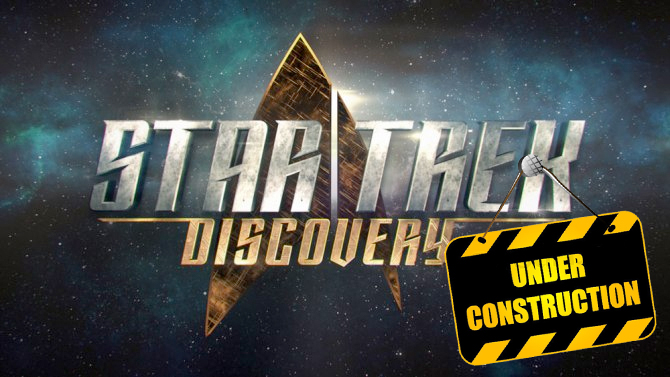 Have you ever sat in the audience for something–a concert, a stage play, or a seminar–and there was an unexpected delay?  Maybe there were technical problems, or maybe someone was stuck in traffic.  Whatever the reason, as things took longer and longer to get started, was the audience becoming impatient?

What does any of this have to do with Star Trek: Discovery and fan films?  Glad you asked!

By now, you’ve probably heard that the premiere of Star Trek: Discovery, the new subscription-based TV series from CBS, has been delayed from January to May of 2017.  A number of reasons have been suggeted for this delay:

Whatever the reason(s), the fact remains that the premiere of Star Trek: Discovery has been delayed by four months (possibly longer).  In and of itself, that is not necessarily a bad thing.  In my opinion, what would be infinitely worse would be rushing this show out, cutting corners, and having an awful new Star Trek series that could, if it’s bad enough, bring a permanent end to our beloved franchise just as it celebrates passing 50 years in existence.

When Discovery was set for a January debut, the answer wasn’t all the complicate.  The previous summer saw the release of a blockbuster Star Trek Beyond feature film, and a couple of months later, the actual 50th anniversary of Star Trek was happening.  There were big convention celebrations in Las Vegas and New York City, and January wasn’t that long after.  The new series could ride the momentum and excitement of those big events, have a huge premiere on CBS (where the pilot will air for free before going to subscription-only) just as folks have recovered from the holiday zaniness.  Discovery could launch with Star Trek fans still psyched and engaged.

At least, that was the plan.

(I’ll leave aside for the moment whether CBS and Paramount actually did a satisfactory job of promoting either Star Trek Beyond or the 50th anniversary.  Some folks definitely believe that the studios really screwed it all up.)

But whether or not the studios did the good or awful job promoting the 50th anniversary is irrelevant now.  That “boost” won’t carry CBS through until May.  Four extra months is just too long; the audience won’t stay happily in their seats.

What’s worse is the competition facing the new TV series.  If it debuts early enough in May, it faces off against all the big season finales during May sweeps….plus there’s Guardians of The Galaxy 2 hitting theaters on May 5.  If CBS waits until the end of May, people are beginning to wander away from their TV sets for the summer and see more movies.  Box office competition in May, June, and July of next year includes the newest Pirates of the Caribbean, then Wonder Woman, World War Z 2, Divergent, Kingsmen 2, Cars 3, Transformers, Spider-Man, War for the Planet of the Apes, and many others.

Now, I’m not saying that someone is going to see Guardians 2 or Wonder Woman and therefore NOT download and watch Star Trek: Discovery.  What I am saying is that it’s going to be a VERY crowded media environment beginning in May.  All of these tent-pole properties are going to be advertising themselves like crazy!  I challenge you to find a summer billboard that DOESN’T feature one of these movies on it.

And into this cluttered mess of advertising and marketing (to the very demographic that CBS is counting on attracting to their new All Access subscription service) enter Star Trek: Discovery.  And, um, good luck getting noticed, guys.

January would have been a much easier time to spread the word.  Not many blockbusters come out after Christmas, and February sweeps are still a few weeks away.  The quieter media environment in January would have been much more conducive to launching a new Star Trek series and generating some excitement, but alas, that option is now off the table with a planned May debut.

So what is a studio like CBS to do?

Well, it’s too bad that they’ve essentially castrated most Star Trek fan productions with those ultra-restrictive guidelines, isn’t it?  When you think about it, Star Trek fan films–the big ones with hundreds of thousands or millions of views on YouTube–serve the same function as the warm-up act before a show.  Sure, the little-known indie band that opens for the main act probably isn’t nearly as good as the top-billed superstars, but at least the audience is kept engaged and entertained while they wait for the main event.

In the year or so before the new fan film guidelines were released, the excitement about and engagement with fan films was palpable.  Renegades premiered their 90-minute feature.  The amazing Star Trek: Horizon debuted.  Star Trek: New Voyages released “The Holiest Thing” and before that, “Mind Sifter.”  Star Trek Continues released “The White Iris,” “Divided We Stand” and “Come Not Between the Dragons.” Starship Farragut released “The Crossing.”  Project: Potemkin released more episodes than I can count–of multiple series!  Other, smaller fan endeavors like Star Trek: Natures Hunger, Dreadnought Dominion, Starship Grissom, Dark Armada, and Star Trek Antyllus released fan film episodes of their own (including the crossover Eye of the Tempest).  And of course, the weekly releases of The Red Shirt Diaries were something I always looked forward to.

And add to that all the fan productions we were getting excited about seeing soon: like Axanar, Pacific 201, Captain Pike, Exeter Trek, Star Trek: Ambush, Star Trek: Excalibur, Star Trek: Anthology, Guinan: the Series, Star Trek: First Frontier, Trek Isolation (with Stan Lee!)…and so many others that I’m sure I’m forgetting.  But fans were donating, discussing, viewing, sharing, and eagerly searching for more trailers and teasers and news about many of these projects.  Sure, the more modest productions had smaller followings, but the larger productions were getting YouTube views well into the hundreds of thousands and even millions.

In other words, the warm-up act was keeping the audience engaged and excited.  And it wasn’t costing the studios a thing!

In the three months since the release of the guidelines, the world of fan films has been relatively quiet–almost a ghost town.  We’ve heard few updates from of those “in progress” productions I listed two paragraphs ago.  Some fan series have ended production entirely, like New Voyages and Dark Armada.  Intrepid has suspended new production for now.  Axanar, of course, has halted production pending the outcome of their copyright infringement lawsuit.  Other fan productions like Renegades, Anthology, and Guinan: The Series have surgically removed any direct references to Star Trek in their upcoming films, becoming generic sci-fi fan films.

A few stalwart fan endeavors are plowing on…with differing levels of conformity to the guidelines.  Potemkin Pictures’ four ongoing series are following nearly all of the guidelines except the one forbidding ongoing series.  However, they’ve come up with a clever workaround: renaming the “series” with each new production.  Another fan project, Chance Encounter out of the U.K., always intended to be a short film and only raised about $2,500.  However, they did announce that their actors, who are professionals, are getting paid.

And then there’s Star Trek Continues.  Their most recent release, “Embracing the Winds,” clocked in at 45 minutes, cost $100,000 to make, is an ongoing series, and pays their actors and many of their production crew.  Granted, this latest release was already in post production and might be considered to be “grandfathered in,” but their plan is to produce and release four more episodes, even though they will similarly not be following the guidelines.

So the guidelines seem to have had a very predictable (and chilling) effect: they’ve essentially unplugged the amps of the warm-up band.  While the “small” fan productions are still moving forward, and most are definitely worth checking out, their viewership is rather limited.  As an example, Star Trek Continues’ latest episode was released on September 3 and already has more than 150,000 YouTube views.  Starship Tristan‘s latest vignette “The Greater Good” (from Potemkin Pictures) was released on September 11 and (as I write this on Friday morning) has only 523 views.

So really, the only fan project right now really doing the job of keeping a large number of the fans engaged is the one series that is NOT following the guidelines.

(I should mention, though, that Chasing the Infinite Sky has nearly 250,000 views since being released in July–and it did follow all guidelines–but it’s not a typical fan film…more of a special effects masterpiece using Kelvin-timeline ship designs.)

But imagine if the engine of fan film production had continued from last year into this year without the anchor of the guidelines and the filing of the Axanar lawsuit.  Imagine the world of Star Trek right now.  Fans would be going wild with anticipation of the upcoming Star Trek: Renegades swansongs of Chekov and Uhura in the two-part “The Requiem.”  Fans would be jumping over themselves to catch a glimpse of the latest teaser or trailer for the long-awaited Star Trek: Axanar.  New Voyages would likely still be chugging along.  Pacific 201 might be almost finished…along with Exeter Trek, Star Trek: Anthology, new episodes of Intrepid, and who knows what else!

And one would assume that these fan films would still be getting media coverage in places like Newsweek, The Hollywood Reporter, and even the Wall Street Journal…just like last year.  In fact, with Renegades nearing the $1 million mark and the likelihood that, without the lawsuit, Axanar might have reached $2 million by now, I would guess the news media coverage of Star Trek’s fan films would have been even more prominent and frequent.

You know: the same kind of media coverage that CBS is going to need in order to get viewers’ attention in May when the time comes to subscribe to All Access.

Instead, CBS and Paramount have protected their intellectual property from the fans.  Was it really worth it?  They’ve slain their dragon…or at least caged it and surgically removed the thingy in its throat that ignites the fire it breathes.

But in doing so, the studios have all but extinguished that fire and any good it could have done if used properly.  You see, the dragon wasn’t attacking the studios…it was helping them.  It was the studios’ weapon to use to leap forward, cut through the media clutter, and make sure Star Trek kept getting noticed.

Instead, the studios will have to work extra hard and spend more money just to keep Star Trek in the public consciousness long enough to last until May.

Good luck with that, CBS.

Click here to learn how you can join the fan film LETTER WRITING CAMPAIGN to try to convince the studios to revise the guidelines to make them less restrictive.