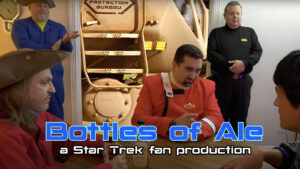 STARSHIP WEBSTER launched back in October of 2020 shortly after showrunner RANDY LANDERS and his wife moved from Birmingham, Alabama to Lexington, Kentucky the previous year and assembled the eighth creative group from POTEMKIN PICTURES. Since then, the Webster crew has been on a tear, completing EIGHT fan films in less than two years!

Their latest release, “BOTTLES OF ALE,” made its debut in mid-July and featured a lot more than meets the eye. Randy gave me some interesting behind-the-scenes tidbits about this production. But before I tell you about all of the things you might not notice, take a look at the finished fan film…

Potemkin Pictures has always presented a wide variety of story genres: action and suspense, quiet and contemplative, sad and tragic, mysterious, etc. This episode was obviously intended primarily to be a comedy. The writer, LIZ KNAUEL, has penned a number of Potemkin scripts over the years, but what few people know is that Liz used to write for Randy Landers’ fanzine group, Orion Press, a full decade ago. So their collaboration goes back a long way!

“A Bottle of Ale” features three actors who might look familiar to viewers of Potemkin’s most recent releases: BILLY SWANSON (who plays the lead Romulan “Crocutus”), MAT ACRA (who plays “Rifkin” in the red jumpsuit), and CLINTON RIDDLE (who plays the “Adjutant” in blue). All three are local to the Lexington, KY area and have collectively appeared in more Potemkin fan films as more different characters than all of the other local actors combined! Part of the reason for their being able to do this is because three different Lexington creative groups are currently producing films. In addition to Webster, there is also STARSHIP CALIBORN (where Billy Swanson plays Captain Hawkins) and the recently-premiered KLINGON SCOUTSHIP QAB’ELTH (where Billy played the first officer Commander Kodai).

Mat and Clinton also appeared in the Qab’elth debut. In fact, that was Clinton’s first experience with Potemkin and led to him getting two additional roles, including being cast as the new captain of the U.S.S. Webster. Randy explained what happened…

Clinton Riddle attended a workday for the Studio, and we invited him to come play a Klingon for Qab’elth. Because of his stature, I placed him at Comm, and he only had a couple of lines, but they were very impressive. We invited him back to play the Colonial Adjutant for Webster‘s “Bottles of Ale,” where he improvised a few lines. Again, he was so impressive, we brought him in to play the Romulan general in Caliborn‘s “Death Sentence,” which was a tour de force for him. Based on those three performances, we offered him the role as Webster‘s captain, and he accepted. He will make his appearance in the next Webster film, “Exiled from Eternity,” in which he plays Captain Richard Lattimer.

Speaking of improvising lines, there was a fun ad-lib by Billy to cover up for the absence of the third Romulan in one of the scenes. ALYSSA RICE, who played the bookkeeper Computanus (a rather appropriate name for a bookkeeper!) had to leave early from the shoot that day. The other Romulan, Potentus, asks Crocutus, “Where is Computanus?” Billy improvised and responded, “She made an error in her math.”

In addition to being showrunner and director, Randy also chose the names of the three Romulans. Computanus wasn’t the only Romulan whose name had significance. Potentus, the Tal Shiar agent, has a name that means “powerful” in Latin. And Crocutus, the cackling villain, has a name that comes from Crocuta, the scientific name for the genus and species of the spotted hyena here on Earth.

By the way, there’s a funny scene in the middle of the closing credits where Rifkin and the Adjutant discuss changing roles next time. That was also completely ad-libbed. Randy tells me that actors typically do a lot of improvisation with their lines. 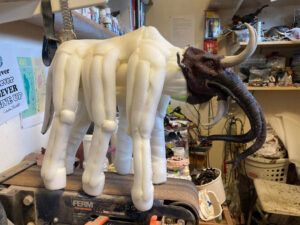 Among the other notable items that Randy shared with me, this fan film was the first Potemkin release to ever use stop-motion animation. RICHARD SVENNSON, who created the digital art backgrounds, also built an oliphaunt creature in his workshop from scratch that appears at the end of the credits, and it’s quite impressive! 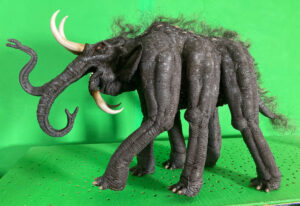 Another first for Potemkin was using Randy’s Lexington, KY living room as a set. It served as the meeting room for the negotiations in the episode (hey, it’s a fan film—you uses what you gots!). Back when Randy and his wife lived in Birmingham, AL, their living room also served as their green screen room. Now in Lexington, they shoot green screen scenes either in the studio portion of the house or else do it outside.

One final thing that Randy told me is a bit sad. You might notice a dog bark in the background of one scene. Randy’s mother died from COVID back in January, and he inherited her little cockapoo, Gracie. The dog lived about three months longer than Randy’s mom (Gracie was nearly 17). While editing, Randy heard the bark and just couldn’t bring himself to edit her out of the scene.

Potemkin Pictures has already released their next film, the aforementioned “Death Sentence” from Starship Caliborn. I’ll be covering that one as soon as I can fit it into my schedule. But I’d better do it soon (!!!) because Randy has another Starship Deimos fan film coming out in October and then a new Project: Potemkin release (the first in years) premiering in November. Randy isn’t sure yet if they’ll have a release in December, but if not, I’m sure it won’t be long until we see more from these guys next year!