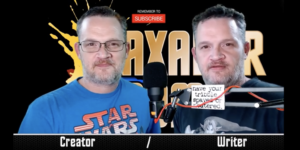 A few months ago, Trey launched his own Axanar Comics Youtube channel. Initially, it simply featured updates on the latest developments in the world of Axanar Comics and Axanar itself. Then Trey began doing stop-motion versions of his comic stories. Most recently, Trey has expanded his offerings to include interviews with folks in the Axanar and fan film community, including THOMAS RAUBE and MARK PAYTON.

Trey already has an impressive 445 channel subscribers (not bad for three months!). And with each new release, Trey improves and expands his skills using his video editing software. His latest offering pushed his abilities to tackle a new challenge: being in two places at once!

The catalyst for attempting this feat was my Axanar Universe fan film INTERLUDE. Trey wanted to create a “commercial” on his channel in support of my GofundMe campaign (have you donated yet?). And as a way of playing off my whimsical “ask” video—where I interview myself—Trey decided to go one step further and appear next to himself, using green screen compositing. He even went so far as to comb his hair differently and put glasses on one of him, similar to what I did in my “ask” video.

The finished product looks very impressive, considering this was a first attempt at a new skill. And it was actually much more difficult to execute than Trey makes it look. (In other words, it looks slick and polished despite having a lot of moving parts.) Keep in mind, as you watch, that Trey needed to follow a script and leave himself enough of a gap each time one of his characters stopped talking for the other Trey to say his lines (since each Trey is a continuous shot). And that’s not easy! Wait too long, and there’s an awkward moment of silence. Come in too soon, and the Treys might end up talking over each other.

So kudos to Trey for pulling this off, and thanks to Trey for helping to promote my GoFundMe campaign (currently just $172 short of the half-way point…hint, hint):

Take a look at Trey’s video below (and “marvel” at his new opening sequence!)…