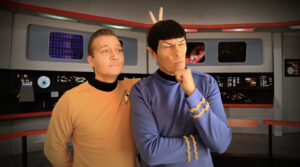 A couple of months ago, shortly before Christmas, JENS DOMBEK (known to the world as “The German Spock”) gave fans the gift of a fun little vignette titled TIMES ARE CHANGING. And with the exception of bookends of 15 seconds at the beginning and at the end, there is no dialogue whatsoever for the three-and-a-half minutes in between!

And that’s what makes this such a unique and enjoyable fan film.

Back in the fledgling days of filmmaking, silent movies endeavored to tell stories without the benefit of spoken words. Indeed, the early works of Charlie Chaplin and Buster Keaton endeavored to make audiences laugh with purely physical (“slapstick”) comedy. In many ways, silent movie-making is a bit of a lost art.

But what’s so great about the fan film format is that there are no rules (only guidelines), and that freedom and flexibility allow fan filmmakers to explore all aspects of cinematic expression…including, as of now, silent slapstick comedy.

Granted, I don’t think Stan Laurel and Oliver Hardy have anything to fear (yet) from the comedy hijinks of Jens and his buddy MICHAEL O’CONNOR KELLY. But who cares? It’s fun watching Captain Kirk and Mr. Spock in a whimsical series of sight gags. Take a look…

Jens (pronounced “Yens”)has been cosplaying as an uncanny Spock lookalike in Germany and elsewhere for many years, sporting a nearly infinite number of costumes and uniforms in nearly infinite combinations…

Jens made his Star Trek fan film debut last June in one of the earliest “fandemic” films, LOOK FORWARD TO THE DAY, alongside fellow cosplayers MIKE LONGO as James T. Kirk and FRANK JENKS as Dr. McCoy—keeping socially distant via a subspace zoom call. A month later, Jens released a short fan film vignette of his own, I AM SPOCK—a mesmerizing 90-second soliloquy made all the more impactful by the eerie doppelgänger of our favorite Vulcan played by Jens. Jens also appeared in another “holiday” fandemic film, PEACE AND GOODWILL, with fellow cosplayers DAVID CHENG (playing admiral Nogura) and KEN HAYASHIDA (playing Sulu) just last December.

I did a full text interview with Jens when he released I Am Spock, but Times Are Changing was so unusual that I wanted to chat with Jens specifically about his latest effort…

JENS – Vielen Dank, Jonathan. I appreciate you having me back.

JONATHAN – So what inspired you to make such an unique Star Trek fan film?

JENS – I actually have two more film projects running at the moment, which are dramatic and exciting, but the idea of portraying something completely different with the characters seemed to me to be exactly right for the current pandemic situation. And that’s how this idea came about. It appealed to me to bring the Vulcan into humorous situations for the viewer, and then the audience would experience the end of the film when Spock lets out the other half, namely his human side, and presents his ability to learn.

If this film, in times like these, elicits a small smile and creates a distraction for a moment, then I’m satisfied. Fortunately, in my circle of friends, I have two perfect captain actors who did a fantastic job, each in their own time. 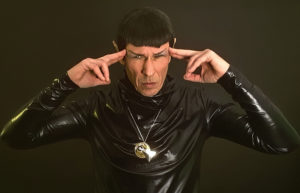 JONATHAN – Yes, you had two Captains Kirk. We’ve already gotten to know Mike Longo from my interview with him for Look Forward to the Day. So let’s talk about your “young” Kirk, Michael O’Connor Kelly.  From the name, I’m assuming he’s not originally from Germany?

JENS – That’s right, he comes from Scotland, but he lives with his family here in Germany.

JONATHAN – So how did you meet him?  Is he a fellow cosplayer or just a casual fan?

JENS – He is a fan, but not a classic cosplayer. He is primarily a singer.

JENS – Yes. We met in 2018 at a wedding with my friends where he sang. Since then, I have had a friendship with Michael that I would never want to miss.

At the time when Michael and I first met, my best friend, whom I was planning to make a movie with, was dying. A short time later, he died, and I have dedicated this fan film to him with Michael as Kirk by my side. This film is about friendship, and this project is very important to me.

Michael’s immediate willingness to work on my project after I explained the situation meant a lot to me. His resemblance to Kirk makes the whole thing perfect. He was enthusiastic from the first moment, and I think since we have a similar level, that will also be the case in the future.

JONATHAN – When did you start working on Times Are Changing, and how long did everything take to film and then edit?

JENS – The basic idea arose in the middle of the pandemic—with the news reported every day about new highs—and one felt the despair and sadness as a daily companion. Originally, I’d had a different fan film idea, but I suggested to Mike Longo that I preferred a more funny version, and he was enthusiastic from the start.

I presented my idea to my friend Michael here in Germany, and he was ready to take on the role of the young captain. We made an appointment and met after a coronavirus check to discuss the project. During this time, the ideas of what could happen grew in my mind, and I wrote them down. At first, I wanted to portray it as a dream, but making it look like a memory was perfect. Michael also brought good ideas with him. We had so many ideas, in fact, that we had to reduce them significantly for the final version.

In addition to his other film projects, Mike Longo and came up with equally good ideas for the captain of the “present.” After that, he began the editing and the background visuals. We worked closely together to refine the pacing of the film.

JONATHAN – Did you write a full script or just come up with the skits and fool around until you had the right take?  In other words, how specific were the directions for each of the gags…and how many takes did each gag require to get right?

JENS – It was a little different with this film because, although the scenes were written in advance, they had to be shortened due to the amount of funny passages. So we picked out only the best, but we shot everything several times and could even make a sequel to this film with all of the extra material…or maybe there will be some kind of outtake reel. 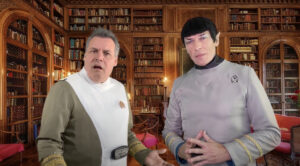 JONATHAN – Did you use any TOS sets (I’m not sure if there even are any in Germany), or was it simply green screen? And what was it like trying to film a scene with you and “older” Kirk in the same shot then you were separated by many thousands of miles?

JENS – Everything was filmed on the green screen, and it really is a challenge to face each other when nobody is there to look at! Mike Longo filmed his half of the scene in America without me, and I filmed my half in Germany without him. The proportions, the speed, the color adjustment…all of this was possible thanks to Mike and his compositing skills. He has a talent for it!

JONATHAN – In addition to yourself and the two Mikes, who else worked on this fan film?

JENS – To set the stage for the flashback sequences, we needed to see the TOS Enterprise. Mike Longo introduced me to the work of WAYNE HARDING, who is a superb 3D modeler and animator. He created a shot of the Enterprise flying by that shows the ship in all of her glory.

Wayne is from Carlisle in the UK, so we were coordinating with yet another time zone! [Laughs.] But the video chats, internet messaging, emails, and online file transfers make it all possible.

After Mike and I had coordinated a solid rough cut of the film, we handed it without sound effects to ADAM MULLEN, who was very much looking forward to composing music on this film. Adam’s music gives the film a life of its own and seamlessly links the scenes and jokes together. His music is also fun to listen to.

JONATHAN – I absolutely agree! If you check out Adam Mullen on IMDb, you’ll see he’s been a VERY busy composer in the fan film community. Anyone else to mention?

JENS – Yes, the artist SONSI LUMBACA, who made the cover picture, is also a good friend who is very talented. I described the idea and, in a very short time, my idea was implemented exactly. I love working with professionals!

Everyone involved with this film had fun working on it. That is very important to me because that’s what matters.

JONATHAN – You mentioned earlier that you’ve got another fan film or two in the pipeline. What can you tell us about what’s coming next?

JENS – At the moment, I’m still doing this completely privately, and everything is paid for with my own financial resources. I wish I had more opportunities to implement the ideas and visions that are playing out in my head. For me, it is extremely important that it results in a win-win situation for everyone involved, and those who deliver should also be rewarded. Having fun was the number one priority for most…especially with the condition the world is now. When life gets difficult for people, their willingness to participate decreases.

My other film ideas require a different budget, but I’m a positive person, and so far everyone involved has always had a lot of fun working with me. The next film will be different again because this time green blood appears, some emotion, but a lot of logic. It will also be new that not only will we be shooting on the green screen, but we will also use drone work for some interesting shots.

The idea is that there will be two films that will suddenly have two paths for the viewer to choose from until a certain scene. A path that forks and, depending on how the viewer decides, the film will have a different plot and outcome. I won’t reveal more!

JONATHAN – Then I won’t press you. But it definitely sounds like another unique fan film experience from everyone’s favorite German Spock!