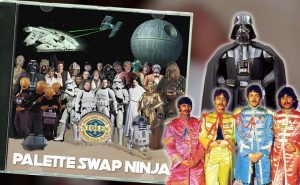 It was 50 years ago today…that Sgt. Pepper blew the world away!

Ten years later (almost to the day!) on May 25, 1977, GEORGE LUCAS released a little film he’d been working on called STAR WARS.  (You may have heard of it.)  This movie changed Hollywood forever.

Like the chocolate and peanut butter in the Reese’s Peanut Butter Cup, The Beatles and Star Wars don’t seem to have much else connecting them.  And yet, if somehow combined, might they not become something totally mind-blowing???

Well, guess what: someone did just that…and knocked it out of the galaxy!

Get ready for PRINCESS LEIA’S STOLEN DEATH STAR PLANS, a full 13-track musical album (from a duo calling themselves PALETTE-SWAP NINJA) that merges Star Wars: A New Hope with the full Sgt. Pepper album in a way that is indescribably amazing.  (Yeah, I know this is supposed to be a blog site about Star TREK fan films, but Solo: A Star Wars Story is still the #1 movie in theaters right now, so I’m making an exception.) 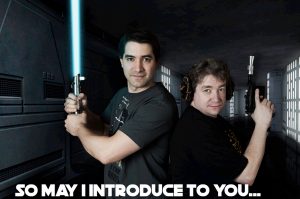 The two genius musicians behind this mash-up masterpiece are San Francisco-based guitarist/singer DAN AMRICH and Boston-based keyboard player and digital drummer JUDE KELLEY.  The two met back in 2003 playing an 80’s cover band in the Bay Area.  And even though Jude moved to the east coast a few years later, they still collaborated.

It took them FIVE YEARS to complete the full Princess Leia’s Stolen Death Star Plans album, and it debuted one year ago on the 50th anniversary of Sgt. Pepper and the 40th anniversary of Star Wars.  Video editor KATRIN AUCH masterfully matched scenes from A New Hope to the music to create a series of MUST SEE videos that, combined, have millions of views on YouTube.

7. “Being From the Spaceport of Mos Eisley”

Obviously, it helps a LOT if you’re already a fan of The Beatles and have, like me, listened to the Sgt. Pepper album and its songs as many times (or more!) than you’ve seen Star Wars.  If so, then you’re probably just as impressed as I am with this incredible work: the lyrics, the instruments, even mimicking the vocals of the four different Beatles during the songs each of them sings.

What truly amazed me the most—aside from everything!—is how perfectly the songs all seem to flow along with the story.  I mean, even that weird “Within You Without You” Indian ballad fits in while Obi Wan is teaching Luke the ways of the Force on the Millennium Falcon.  (The song totally wouldn’t have worked during the Rebels’ assault on the Death Star!)

Band-member Jude Kelley noticed it, too.  The following quote is from their website…

We were surprised to find just how well it all synched up.  The title song sets everything up with the pursuit of Princess Leia on the Tantive IV. “She’s Leaving Home” hits just as Luke decides to follow Ben to Alderaan, and the circus atmosphere of “Being for the Benefit of Mr. Kite” is the perfect parallel for Mos Eisley.

Sure, there were a couple of things that I noticed were “missing” (likely, they just wouldn’t fit): “These aren’t the droids you’re looking for,” Han and Chewie coming back to help Luke at the end of his trench run, and the final medal ceremony.  But these were so minor compared to everything else they managed to squeeze in.  I mean—sheesh!—they even found a way to adapt “Lovely Rita, Meter Maid”!  And honestly, after ending “A Day in the Life” with the explosion of the Death Star…that was just too perfect and would have been ruined trying to add the medal ceremony afterward.

The work and dedication that went into this project seem obvious from the moment you notice the familiar text crawl and hear the new lyrics on the first video. Jude continues…

We both grew up obsessed with Star Wars and surrounded by Beatles music.  This whole project comes from a place of deep love and respect, so we had to take the time to do it justice. The final album needed to be high quality, accurate, and entertaining on repeat listenings.

We hand-craft our lyrics, down to each syllable. Making sure the words hit the right rhythmic cadence and told a coherent story – AND would make fans smile – took more than a year.

But it wasn’t just the lyrics.  The instrumentals are spot-on, as well.  And this was no accident or cutting corners.  They even used the same model of vintage organ that The Beatles had originally used on “Lucy in the Sky With Diamonds” to make their parody version.  Dan explains…

Recording all our music from scratch has always been part of the Palette-Swap Ninja process; it wouldn’t feel right to just use karaoke tracks.  We sweat the details on both sides in an effort to do both cultural milestones justice. Writing hyper-specific lyrics that match the original songs’ cadences; reverse-engineering everything the Beatles recorded, from distorted saxophone riffs to Indian tabla rhythms; recording everything from scratch and learning as we went — well, that’s what takes five years.

The mash-up album was released on May 1, 2017…just in time to be promoted during last year’s “May the Fourth” (be with you!) Star Wars Day celebrations around sci-fi fandom.  But Dana and Jude weren’t in it for the money.  The songs and videos are all available for free (you can download these and other parody songs of theirs using links from their website).

What they wanted, sincerely, was to make people smile and entertain them with this labor-of-love tribute to these two universally-adored iconic masterpieces.  But they never expected to find this tweet posted barely two days later…! 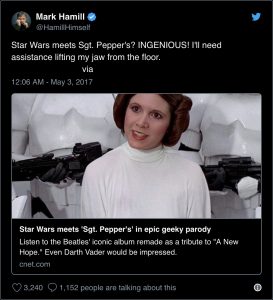 The seal of approval from Luke Skywalker himself!  Pretty cool, huh?

Indeed, they were picked up pretty quickly by io9/Gizmodo, barely 14 hours after the videos went live.  By the end of May,Princess Leia’s Stolen Death Star Plans had coverage on at least hundred different blogs, sites, and podcasts… including Entertainment Weekly, NPR, CNET, Nerdist, The Hollywood Reporter, and Rolling Stone (France).

The parody album was a hit, and the Boys from the Bay Area (as opposed to the Lads from Liverpool) were ecstatic…and exhausted.  But with great viral success comes great pressure to do it all again, and so it was with Palette-Swap Ninja.  From their website…

After Princess Leia’ Stolen Death Star Plans was released, we got a lot of questions from folks who liked what they heard. “What about Empire Strikes Back to Abbey Road? Return of the Jedi over Revolver?” Honestly, PLSDSP was as rewarding as it was challenging to create, but we really considered it to be a wonderful, fortunate, singular combination. But, as we said a few times in interviews, we still love The Beatles and Star Wars, so we’d be interested in combining them again if an idea presented itself.

That idea came later in the year when Jude had a brainstorm: “Lady Madonna”…Leia Organa?  The syllables fit perfectly.  And with the tragic and untimely passing of Carrie Fisher at the end of 2016, this seemed like the perfect tribute to the actot and her wonderful character.  Released (not coincidently) to coincide with the premiere of Star Wars: The Last Jedi, “Leia Organa” was another wonderful Beatles/Star Wars mash-up…

Pardon me, I just need a second to wipe my eyes.

Okay, so what’s next for this incredibly talented duo?  I mean, wouldn’t it be awesome to see them do this parody album live on stage???  Well, Dan and Jude addressed this question on their website:

Since the release of the album, we’ve had a few people ask us when we’d be playing this album live. The problem — aside from Jude living on the East Coast and Dan living on the West Coast — is that we don’t want to do a live show unless we can go all the way. Two guys standing on stage with a bunch of computers replicating all these complicated parts and calling it a live show is not what we want to do. Many other bands have performed Sgt. Pepper live, even if the Beatles never did, so it’s not like it can’t be done — but we decided that if we’re going to do it, we want a proper harp and string quartet for “He’s Leaving Home” and multiple saxophones on “Keep Moving Keep Moving” and a full symphony orchestra on “A Day in the Life of Red Five.” So, you know, that kinda kills the project right there — it’s not like there are awesome orchestras just lying around, right?

Well, it turns out there’s at least one — and it’s literally the Awesöme Orchestra in the Bay Area. We’re working with conductor David Möschler to make a live performance of PLSDSP a reality, with a plan to perform the album in its entirety later this year. We’re currently working out the numerous details but we hope to have a time and place announced soon so everyone who wants to come see this one-night-only performance will be able to plan ahead.

One last thing, as I’m sure a lot of people out there would love to learn more about the process these guys went through to create these many wonderful song parodies.  Just last month, Dan and Jude celebrated the one-year anniversary of their mash-up album’s release with this really fascinating (and funny) digital look at the making of the Princess Leia’s Stolen Death Star Plans album and videos.  It’s really worth checking out if you’ve loved watching and listening to these videos… 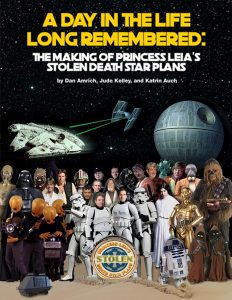