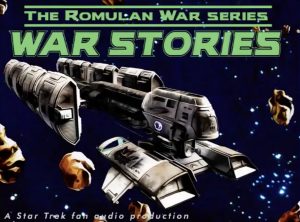 One of my favorite things about Star Trek is that there are so many stories still waiting to be told…not only about the crews of the USS Enterprise or Voyager or Deep Space Nine but all over Starfleet, the Federation, the Klingon Empire…the entire Milky Way Galaxy!  It’s one of the reasons I love fan films so much, as they explore that special universe that I cherish.

I also find myself truly intrigued with how we get/got/will get from here to there…not just the triumphs that built the Federation but also the struggles and even the failures.  It’s why I’m such a fan of Axanar, and why I’m so looking forward to the upcoming Pacific 201 and First Frontier, both filling in some of the missing details about major turning points in the history of the United Federation of Planets.

And it’s why I can’t wait to see the new fan production THE ROMULAN WAR.

War stories, if done right, can be very compelling.  They test the characters, twist them into unrecognizable shapes, and spit them out…sometimes for the better but all-too-often for the worse.  How do we survive war?  How do we fight?  What decisions do we make that might have been unimaginable to us during peacetime?

There are just some of the questions that are asked in a fascinating new “enhanced” audio drama just released in the lead-up to the debut of The Romulan War fan film series.

I don’t usually cover audio dramas—not because I don’t enjoy them but simply because I don’t have the time to cover both audio dramas AND fan films.  But in this case, I’m making an exception because 1) The Romulan War will be a fan film soon, and 2) this isn’t “just” an audio drama.

While some audio dramas feature still images in a slide-show format over the dialog, The Romulan War series “WAR STORIES” goes a step farther.  Rather than try to explain it, let me just show you their first 2-part audio episode: “Sleep Is Hard To Find”…

And here’s a funny behind-the-scenes story for you: I helped make those two episodes without even knowing I was doing it!

It all started several weeks ago when Romulan War show-runner MARK NACCARATO posted on Facebook that he was looking for someone with Photoshop skills to help on his fan project.  I responded back that I might have some time depending on how much work was involved.  Turns out that Mark just needed some people’s faces Photoshopped onto bodies dressed in NX-era outfits.  Shouldn’t be a problem, I told him.

I didn’t have any idea how these images would ultimately be used, and I didn’t ask.  I’m always willing to be surprised by fan productions.  So I downloaded the first photo.  It was of a guy named Drew Dunlop standing in front of curtains or striped wallpaper or something.  I’d discover later that this was the voice actor who would play the admiral recording the log in the just-released War Stories drama. 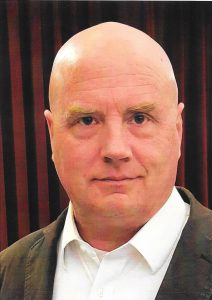 The first order of business was to find a decent image of an NX-era admiral.  Easy enough…just type “Star Trek Enterprise Admiral” into Google and look at the images.  This one was the best in terms of angle and lighting and quality… 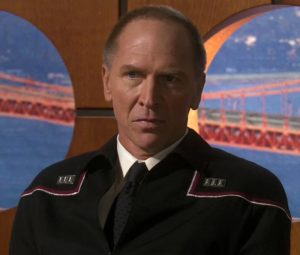 The challenge was mainly the lighting and shadows.  Admiral Forest (above) had some deep shading on half his face.  Drew was fully lit.  So I needed to add some shaded areas to Drew’s face.  I also needed to fake a little of the Golden Gate Bridge and window behind Forest’s ear.  And finally, Mark asked me to turn the red stripes on the uniform to gray to indicate a different division of Starfleet.  A few hours later… 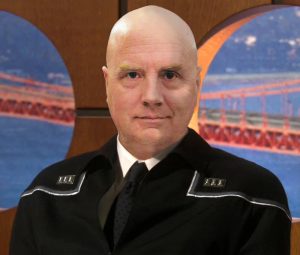 Mark loved it (whew!).  A week later, he sent me my next photo: his old friend Tim Domico.  This time, I needed to place the head on a civilian freighter engineer from Earth.  Fortunately, there was an episode in the first season of Enterprise with lots of screen time for a civilian freighter crew: “Fortunate Son” (episode 10) when Travis Mayweather returns to the freighter he grew up on.  Wandering over to Trekcore.com, I found four images that featured the outfit Mark requested (and matched the angle of the head-shot he had provided)… 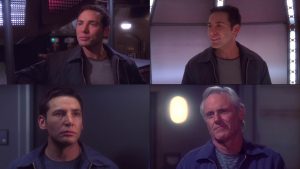 Mark liked option #1 the best (so did I), and once again, I got to work.  This time, it was a little more of a rush job, as I’d be leaving the next day for a week in Colorado with family and wouldn’t necessarily have time to do Photoshop work.

Fortunately, this time, there were already shadows on the face in the photo, and they were pointing in the right direction, too!  Yay…less work for Jonny.  This time, the main things I had to do were extend some of the background again, match the skin tone to the magenta hue, and work on the area where the neck meets the shirt.  Take a look…

I still had no idea what these two photos would be used for, but I found out the following week when donors to The Romulan War Indiegogo campaign got a sneak peek at the two-part enhanced audio drama before it was released to the general public.  I was totally blown away!  I loved the seamless combination of short video clips, simple animations around the still frames of my Photoshopped people (and other graphics), along with the gripping voice-over performance of the admiral’s log.

You may have noticed that this crowd-funding campaign is still active and accepting donations.  This is what Indiegogo calls “in demand”: when a campaign is allowed to stay open after successfully reaching its goal.  However, with an initial goal of $10,000 and having taken in $12,630 so far, the question becomes: Why do they need even MORE money now?

The answer, as I just learned from Mark Naccarato, is actually very exciting!

A few months ago, Mark started chatting with Australian fan filmmaker AARON VANDERKLEY, who has been making a name for himself with a series of MUST-SEE fan films set in the NX-era.  Aaron has set pieces ready to use, spot-on Starfleet uniforms of the period, and produces professional quality work with trained actors.

Aaron has agreed to film some additional scenes to include in The Romulan War!

Although Aaron isn’t directly charging for his services, he’s still footing the costs for transportation and feeding of the actors, electricity for the shoot, make-up, and a bunch of other incidentals.  Plus Some of Aaron’s footage will require green screen background FX.  It’ll probably be about $1,000-$1,500 U.S. dollars for everything…and Mark would really like to help Aaron defray his costs.  Unfortunately, the money from the Indiegogo campaign, despite being 17% over the original goal, has already been spent elsewhere.

So Mark is using the release of these two enhanced audio drama fan films to encourage supporters to donate just a little bit more to help a helpful Aussie make his own major contribution to this exciting fan project.  You’ll notice a new stretch goal has been added at the $14,000 level…