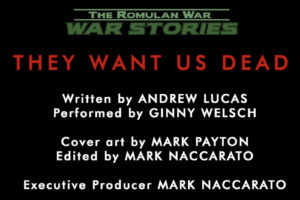 I’m beginning to really, really love these enhanced audio dramas that are being released by MARK NACCARATO as a lead-in to his highly anticipated THE ROMULAN WAR fan film!  The project itself managed to take in over $12,000 in a recent Indiegogo (and is now trying to reach $14,000 to cover the cost of new live-action footage shot in Australia along with new CGI).  And the full fan film itself is supposed to be released very soon.

But in the meantime, Mark has released a series of “enhanced” audio dramas under the banner The Romulan War: “War Stories.”  These are personal log entries from those serving in Starfleet during the Romulan War with Earth that led to the founding of the United Federation of Planets in the mid-22nd century.  The idea is to tell the “smaller” stories of war, while the main fan film tells the “big” story.

And what are “enhanced” audio dramas?  Like most audio dramas, the actors record their lines vocally, without a video camera running.  But rather than just playing back the audio over a black screen or a single image or even a series of images, there is actually an ongoing video the whole time, some with simple 2D animation, some with video footage, and some even with 3D CGI.

Mark’s first release was made available to the public about a month ago, the two-part “Sleep Is Hard To Find” (you can view it here).  Now the second release is a one-parter entitled “They Want Us Dead,” and it’s riveting.  I really mean that.  An intense and gripping vocal performance was turned in by actress GINNY WELSCH, who has extensive experience with voice work, over a brilliant script written by ANDREW J. LUCAS, who previously penned multiple episodes of the just-completed The Romulan Wars (plural) fan series.

You’ll probably recognize some footage in the video “borrowed” from a number of familiar cinematic sci-fi sources.  Whether or not the studios who own that footage will care about or bother with a small fan film getting a few hundred views is anyone’s guess.  But that shouldn’t stop you from enjoying the production…

And remember that you can still donate to the “in demand” Indiegogo campaign to help them reach $14,000…

Mindcrime Entertainment has released a new audio drama in their “War Stories” series which ties in to their upcoming film, The Romulan War: A Star Trek Fan Production.

The latest episode, “They Want Us Dead,” was written by Andrew J. Lucas and performed by Ginny Welsch. It tells the story of Sergeant Trisha Goddard as she and her MACO unit fight an ultimately futile battle against Romulan shock troops in the campaign to liberate Berengaria VII. Trisha’s account of events reveals the costs of war – both physically and psychologically.

“The Romulans have always been my favorite Star Trek villain, but I never felt they got the respect they deserved as a fully-formed military,” Andrew says. “You don’t make and hold an empire with starships alone. We’ve seen how the Romulan Navy operates, but never their ground forces.” Andrew’s tale is told from the MACO’s perspective and has hints of terror, survivor’s guilt, and PTSD. “This story allowed me to make the Romulans into the ultimate boogeymen.”

Bringing the story to life is voice actor Ginny Welsch, who plays the role of Sgt. Goddard from her home studio in Nashville, TN. Ginny has years of experience doing voice work in commercials, industrials, promotions – you name it! She’s also the co-founder and driving force behind WRFN – one of the country’s first licensed, low-powered FM radio stations.

Star Trek has been at the forefront in promoting gender equality, women of color, and an acceptance of all cultures, based on peace and the general directive to never adversely affect the development of a civilization,” Ginny says. “I’m proud to be even a small part of that positive culture and the long line of strong female characters that Star Trek has fostered, from Lt. Uhura all the way through Captain Janeway.”

To listen to “They Want Us Dead,” stream it from The Romulan War’s Soundcloud page or take a look at the special “enhanced video” version of the story on The Romulan War’s YouTube channel. “They Want Us Dead” comes in the wake of Mindcrime’s two-part TRW audio drama, Sleep Is Hard to Find, which was released in August. More audio dramas tied into the TRW universe will be released over the next several months. Currently, The Romulan War: A Star Trek Fan Production is still raising funds to finance second-unit photography in Australia. For a limited time, backers will receive a limited-edition set of Lobby Cards from the film. For details and to donate, visit the production’s Indiegogo page.