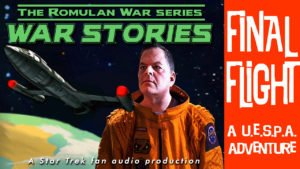 Hey, guess who developed the Warp Seven engine?  Me, that’s who! Well, that’s not entirely true.  I had help (will have help?) from my NX-Zeta project team, and from MARK NACARRATO, the show-runner of the upcoming fan production THE ROMULAN WAR.  Oh, and it wasn’t really me; it was Lieutenant Geoffrey Christopher of the United Earth Space Probe Agency.  But he looks and sounds a lot like me. I suppose I should back up a few steps and explain what the heck I’m talking about… For those of you unfamiliar with The Romulan War, it’s going to be an amazing Trek fan film picking up where Star Trek: Enterprise left off…at the beginning of the war between the Coalition of Planets and the Romulan Empire.  Filming on the production is all but completed, and now the finishing touches of post production—editing, VFX, sound, music, etc.—are being applied.  Release is planned for 2019. Of course, with the limitations of the fan film guidelines, it would be nearly impossible to recount the entire war…despite using a “mock” documentary style similar to Prelude to Axanar.  So Mark came up with an interesting idea to push the envelope a bit—WAR STORIES.  These are short vignettes that are essentially audio dramas…just with a little something “extra” added: images with simple animations.  These “enhanced” audio dramas are presented as the logs of various Starfleet officers who served during the war, and the logs are accompanied by computer readouts and archival photos with some short video clips.  Less than a full fan film but more than a simple audio drama. Last August, Mark released the first War Stories, the two-part “Sleep Is Hard to Find.”  If you go to that blog page, you’ll see that yours truly provided some of the Photoshop work to get the actors’ faces onto NX-era uniforms.  A month later, Mark released the second War Stories, “They Want Us Dead.”  That one didn’t require my Photoshop services, but the third release, “Final Flight,” did. It also required my face… Mark and I have developed a nice friendship.  As a thank you for my Photoshop assistance, Mark asked me if I’d like to be the face of the famous Geoffrey Christopher—direct descendant of Captain John Christopher from the TOS episode “Tomorrow Is Yesterday” and his son, Colonel Shaun Geoffrey Christopher, who grew up to command the first manned Saturn mission in the early 21st century. In a pseudo-sequel to the second season Enterprise episode “First Flight,” “Final Flight” would tell the story of how Lt. Geoffrey Christopher leapfrogged over Warp Six to develop Starfleet’s first Warp Seven engine that would help Earth and its allies defeat the Romulans.  Since Star Trek never mentioned or showed this guy, Geoffrey Christopher could look like anyone.  So why not make him Fan Film Factor blogger JONATHAN LANE? I was flattered and happily agreed to do it.  Of course, that meant usimg Photoshop to shave a few dozen pounds from my somewhat rubenesque figure (if ’twere only that easy in real life!) and un-receding my receding hairline just a twinge.  The first image I delivered was of me wearing an NX-era orange flight pressure suit.  It was supposed to be the thumbnail “cover”of the video and looked like this… 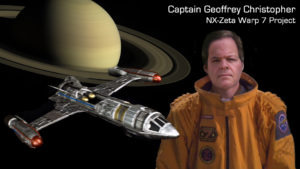 I worked hard to match the lighting on my face with the lighting on the suit, I created a custom “Warp Seven” project patch (which some folks in STARFLEET the International Fan Association will recognize as a variant of the Region 7 logo I designed back in 1986), and I added an NX test vehicle along with the planet Saturn.  Not bad, right? Well.. Mark didn’t want to look a gift Photoshop artist in the mouth, but he’d actually been thinking of something slightly different.  He wanted Christopherto be gazing skyward, and he wanted a special sepia-tone, oil-paintish appearance…like the old pulp fiction novel covers.  That would match his style for the other War Stories video thumbnails.  He would also be adding in the other visual elements himself, so he needed just me (Christopher) alone against a black background.  No worries; I’m easy.  I delivered him the adjusted image a few days later. 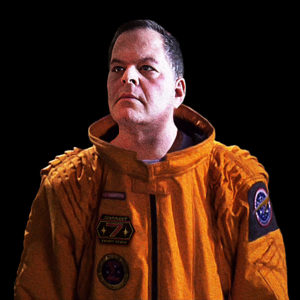 It was around this time that Mark called me up with an intriguing suggestion.  Would I be interested in not only being the face of Lieutenant Christopher but also the voice?  I had already donated to the crowd-funding campaign at a level where I would be invited to record some background subspace chatter to be used in the final production.  But that was just a few short lines among many other donors’ voices.  I hadn’t expected to get a full speaking role…and a leading one at that Add to that the fact that, with the exception of a handful of high school plays and musicals and a few low-budget Trek fan films, I have virtually NO acting or voice-over experience…and zero training.  Mark’s other two voice-over people were trained actors (and it shows in their excellent performances). But Mark had a philosophy of “Hey, if you’re willing to try, then so am I.”  After all, how bad could it be?  If I really sucked, he’d tell me (I can take it!) and find somebody else.  Or maybe he’d still use me anyway.  After all, it’s just a fan film, and it’s supposed to be fun—not get nominated for an Oscar. 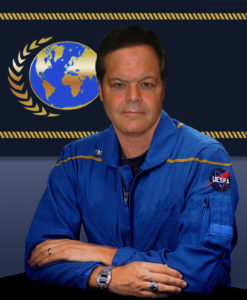 I received Mark’s script the weekend of Thanksgiving, with a request to have my recording ready my mid-December at the latest.  (Oh, the pressure!!!)  Fortunately, I’d just purchased a nice new Blue Yeti microphone for my computer, so I could record at my desk as long as Jayden was at school, Wendy at work, and no loud trucks or ambulances or low-flying planes were passing by our house The full script had only about four minutes of dialog, but it still took me a few hours to do.  While I’m not a trained actor, I am a bit of a perfectionist, and I did a LOT of re-takes until I had something I has really happy with.  I delivered a completed sound file to Mark a couple of days later. Then it was Mark’s turn to play perfectionist (and he is the director, after all).  Since Mark lives in Tennessee and wasn’t about to fly to Los Angeles just to coach me in person, he had to wait until he heard the first read-through to give me feedback.  Most of it was solid, he told me, but the first minute or so of dialog was a little too “enthusiastic.”  Christopher finds out that Command has green-lit his NX-Zeta Warp Seven proposal, and I figured he’d be REALLY excited to tell his wife the good news via a subspace recording.  Apparently, though, I dialed the excitement up to 11, and Mark was hoping more for a 5 or 6 at most.  After all, Christopher is a respected scientist and spaceflight engineer. No worries.  I re-recorded the segment, dialing my “performance” back quite a bit.  I still kinda like my over-the-top version, since I think it makes Christopher seem more human, but the new version works, too.  And heck, now I know that I can take direction—Hollywood, here I come!  (Actually, I can drive there in about 20 minutes. Before I show you the finished product, I want to share one other fun story.  Mark asked me for a few more “photos” of Christopher, and supplied me a few Enterprise screen captures to Photoshop my face onto.  But I noticed there was nothing showing Christopher with his family, and his sons are mentioned in a very emotional moment toward the end.  However, I had a crazy idea.  Every year or so, Jayden and I visit “Starfleet Academy”—or rather, the shooting location that Paramount used: the Japanese Garden and Tillman Water Reclamation Plant in Van Nuys, CA—and take a Star Trek photo.  I have many of these with Jayden at different ages. 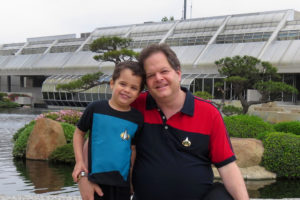 Jonathan with Jayden at age 4.

Since Christopher has at least two sons, I thought that maybe Jayden and I could go back to the Japanese Garden and take a photo with him at eight-years-old and Photoshop in a four-year-old Jayden, as well.  While I don’t have an NX-era uniform, I do have a passable Jonathan Archer jacket hoodie that I bought online.  So Jayden and I took a short drive out to Van Nuys a couple of Saturdays ago, grabbed a few photos (and had a nice stroll through the beautiful garden), came back, and I started working my Photoshop magic.  Take a look at Lt. Geoffrey Christopher with his two sons at Starfleet Academy in San Francisco… 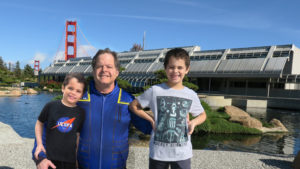 “Final Flight” was posted last Saturday as an early release exclusively to Romulan War donors.  Today, it premieres to the public with amazing CGI sequences by the equally amazing SAMUEL COCKINGS. Let me know what you think of my “big debut”… There’s an audio-only version of “Final Flight” on their SoundCloud page Also, remember that the Indiegogo campaign for The Romulan War is still active, currently trying to reach $14,000 to cover the shooting of additional footage by Australian fan filmmaker AARON VANDERKLEY, whose NX-era productions are a MUST SEE.  To donate, click this link…