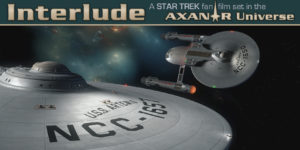 The crowd-funder for my fan film INTERLUDE goes live next week, and this is my last chance to share the details of the budget, explaining the goal of…

…(a slight increase over the estimate in my previous blog from three weeks ago because a few things have changed).

Before I begin, let me state for the record that this budget was compiled by me based on input from a number of sources, including my directors VICTORIA FOX and JOSH IRWIN along with several other people whom I trust. But the final numbers and estimates were mine because, as executive producer, I am the guy responsible for raising the money, explaining to you how we are going to utilize it, and ultimately writing the checks from the money we raise.

So is this budget 100% perfect? Probably not. Some things might end up costing less, some will cost more, and probably a bunch of things we haven’t even thought of will suddenly pop up out of nowhere. If we come up short, we’ll need to figure out ways to trim things. For that reason, I’ve “erred on the side of caution” and created my budget to assume costs on the high side. That way, if we don’t make our goal, we’ll hopefully still have enough to make a decent fan film by streamlining and trimming things from the budget.

One place the funds do NOT go is to Axanar Productions to help ALEC PETERS in any way to make his Axanar sequels. That would, according to Alec himself, violate his settlement agreement with CBS and Paramount. This includes giving him any of our uniforms to use for his shoot. (Amusingly, he can loan some of his uniforms to us, but not vice-versa. Even though that sounds odd, it’s the legally prudent thing to do.)

And now, let’s take a deep-dive into our budget…

People usually arrive early (like 8am) and often work long past dinner (8pm or later). The production is expected to feed them. In addition to just being the nice thing to do, it also keeps people in the studio rather than driving off for a lunch or dinner that could leave them missing just when they’re needed for a scene.

Anyway, that’s three meals plus drinks and snacks for everyone, and the typical estimate is about $25/person per day for feeding and watering. We’ll have about 25-30 people per day. This will include actors, extras, production crew, and potentially some student volunteers from the local high schools for two days.

I’ll be flying from Los Angeles to Atlanta using miles, but my directors and their sound engineer will be driving 11 hours (each way) from Arkansas to Georgia. Even though the fan film guidelines say that I can’t pay people, it isn’t fair to make my team members pay for the privilege of volunteering. So naturally, I am going to pay for their gas. I’ll also be paying for their hotel rooms for three nights in Lawrenceville. One of them can stay in one of Alec Peters’ spare bedrooms (I get the other).

My directors are going to be bringing some of the equipment we’ll be using, but we’ll still need other stuff. Estimates for a weekend rental come to $2,500 at present. This might ultimately go up or down depending on what might be available at Ares Studios. We’ll know better as we get closer to the shooting date, but to be safe, we’re using the $2,500 estimate. But this might be one of the places where we can trim the budget a little.

Renting Ares Studios for two days is $500. Alec offered to let us use the Ares bridge set for free, but I want it to be crystal clear that Interlude is completely separate from an Axanar production and isn’t being treated differently than any other fan project. So I’m paying the $250/day fee. I’ll also be paying GLEN WOLFE $100 for the use of his sickbay set in Arkansas for a day to film one of our scenes.

A few weeks ago, it was suggested that we get production insurance…which ain’t cheap! I’ve considered the question carefully and decided to include the item in our budget. However, if we miss our goal significantly, this might be an item for the chopping block. Also, Alec Peters is looking into extending the insurance on Ares Studios to include outside productions that film there. So this line item remains a big “maybe” for now.

In my previous deep-dive blog, I explained how our tunics are not the familiar (and licensed) TOS style but a unique look for the Four Years War (20 years before Kirk’s 5-year mission) designed originally by BILL KRAUSE… 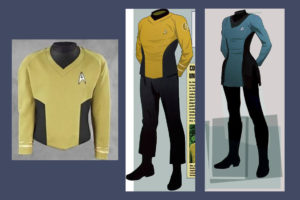 So we can’t buy these from a licensee; they have to be hand sewn. That’s materials and labor, and it’s not something that can be volunteered. (It’s like buying a video camera or ordering a pizza…you don’t get those for free, and CBS can’t expect such things not to be paid for.)

Between the cost of fabric and labor, it’s going to be about $250 per tunic (a decently-tailored TOS tunic from a licensee like Anovos can cost anywhere from $225 to $345…so we’re in the right neighborhood with $250).

We need roughly 20 uniforms. There’s two different starship bridges with full bridge crews (about 8 officers on each) plus a scene in sickbay with three doctors and one in engineering with a chief engineer. If we come up short on the crowd-funder, we might be able to trim a few extras, but we’d really like to be able to shoot wide establishing shots of both bridges without them looking empty during a red alert situation.

But it’s not just tunics…

The uniform is a V-neck tunic over a high-neck black shirt. In my last blog, I made the mistake of listing Land’s End as a potential source of the kind of shirt we needed. Man, did THAT blow up a controversy! So I did a newsearch the found shirts we can use from a place called Shein for $10 each plus tax and shipping. Gotta buy 20 of ’em.

We might be able to “cheat” this with some actors and extras sitting in the “well” of the bridge. If so, then they’ll likely be filmed just from the waist up and they can wear cargo shorts and sneakers if they want to and no one will ever know.

Obviously, this isn’t the case with the captains and the officers sitting or standing at the upper console stations…or the doctors/nurses in sickbay. Now, we might be able to get by without boots for some of those people I just listed, but others will need boots. We also might be able to get cheaper black pants. We’re still pricing all of that, but we’re putting in $2,000 for now to cover pants and boots together for those who will need them.

I explained in the previous blog that each tunic has three patches sewn onto it: one insignia on the chest, a ship’s emblem on the left shoulder, and a first fleet patch on the right shoulder (similar to the NX-era uniforms)