The fan series STARSHIP VALIANT has just released its latest episode, “Animals,” a fan film that got its start a little over three years ago in 2017. But the story of Starship Valiant goes back farther than that and starts with a fellow named MICHAEL L. KING. Michael is considered my many fan filmmakers to be one of the nicest people in our entire community. He’s positive, polite, doesn’t get angry or hold grudges, and he’s always willing to help out other productions. He loves Star Trek fan films and supports all of the many people who make them.

But before we get into Michael and the history of Starship Valiant, let’s take a look at his team’s most recent fan production…

And now, let’s travel backward in time a bit. Michael had loved watching Star Trek fan films, being particularly impressed with the quality of productions like STAR TREK: NEW VOYAGES and STARSHIP EXETER, both of which featured TOS set recreations. In fact, the amazing bridge set from Exeter had managed to find its way from Austin, TX to Michael’s backyard of Oklahoma City (read the entire story of the birth of STARBASE STUDIOS here).

A fellow by the name of JOHN HUGHES had found the Exeter‘s bridge set in 2009, decaying in a Texas barn for five years since they’d shot their second episode “The Tressaurian Intersection” in 2004. John’s intention was to restore the bridge (and build other TOS sets), to use in the creation of his own Star Trek fan series, STARSHIP AJAX. By 2013, with RICHARD WELLS and SCOTT JOHNSON leading the construction team, the bridge set was now ready to film on. And so John set himself the task of looking for volunteers to be a part of the new production. 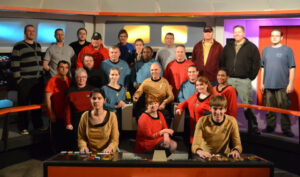 A photo from March of 2013 of what would have been the cast and crew of Starship Ajax. John Hughes is second-from-the-right wearing a black jacket. Michael L. King is standing behind the command chair wearing a blue tunic.

This is where Michael enters the story…

“I actually met John Hughes after a special screening of The Wrath of Khan in a local theater,” Michael recalls. “He approached me and gave me a handout card featuring an advertisement of the fan film Starship Ajax. He told me that if I would like to be involved in the making of the film in some capacity to visit the set, and we would go from there.”

Being a huge TOS fan, Michael took John up on his offer. “I was simply blown away and had to be involved! I started sort of documenting the progress of the film, and then I was asked by co-creator JIM BRAY if I would like to read for a part. So we scheduled an online reading, since Jim lived in Vermont, and he liked my interpretation of the character…and the rest was history, as they say.”

Unfortunately, the Ajax project struggled to make progress. “There were so many hurdles and obstacles in the making of Starship Ajax,” explains Michael, “and in the end, it became quite frustrating and disappointing as we just couldn’t seem to get the production moving forward. We filmed the first act of the feature ‘Barratis,’ but due to limitations and lack of people willing to participate in the project, it all came to an end. So that’s when I decided to write my own film featuring an all new cast and ship.”

Michael had some very specific ideas of what he wanted to do with his fan production. He noticed (at the time) that fan film stories would typically focus on the THINGS that happened (usually involving fights and space battles) and not the PEOPLE those things were happening to. Michael wanted to tell stories about the characters and make them relatable to people watching.

Michael included in his script a first officer feeling guilt over the death of his captain (and other crew members) during a battle, reluctant to take over command when it’s offered to him later. The script also dealt with that officer as a father who had been absent from his family’s life due to serving on a starship. And finally, there was a vice-chief engineer who didn’t get along too well with the chief engineer. In other words…real people with real problems. 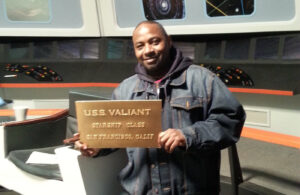 Michael initially wanted to use the name Pegasus (inspired by the second surviving Battlestar in the original Galactica series), but he preferred a heavy cruiser class, and the Franz Joseph Starfleet Technical Manual listed the Pegasus as a scout. Richard Wells suggested Valiant, which was, coincidently, the name of the town where Michael grew up! Richard had researched the name in Star Trek, and two Valiants were reported destroyed in TOS episodes, and a starship with that name appeared in Deep Space Nine…so “Valiant” must be a fairly honored name in Starfleet to be used multiple times. At first, Michael agreed to use Valiant only reluctantly, “…but the name really grew on me,” he adds. “That’s just a really heroic name–Valiant—and it’s pretty kick-ass.”

Amusingly, after struggling to find a name for their fan series that wasn’t already taken, in April 2013 (just prior to Michael’s team beginning production on Starship Valiant), an ultra-low budget fan series debuted with the name STAR TREK: VALIANT. However, it was a different starship class, and that other fan “series” never released more than a single episode.

Michael proceeded to write a script titled “LEGACY” that began with an attack on the U.S.S. Valiant that resulted in the death of its captain. But rather than spend too much time on the battle itself, the film focused on the emotional aftermath as the first officer, haunted by his “failure” both as a Starfleet officer and as a father, has difficultly accepting command of the Valiant when it is offered to him.

With a first draft written, things shifted into high gear with the addition of BRADY FOSTER to the production team. “Brady was scheduled to come in and view the bridge set on a Saturday morning,” remembers Michael. “We, (myself, Scott, Richard, and John Hughes) all met at a local restaurant for breakfast along with Brady before going over to see the set. John already knew Brady and had entertained asking him to help shoot Starship Ajax, but for some reason or another he did not ask him to be a part of the production at breakfast or at the set. Brady and I began to talk Trek, and there was a genuine chemistry between us and our love for the original series. He showed me a CGI opening of the classic 1960’s title that he had done and his desire to film on the set. It was at that moment that I told him that I had a script ready to shoot (“Legacy”) and that I would love it if he could help me shoot it. He immediately agreed, and “Legacy” began production. 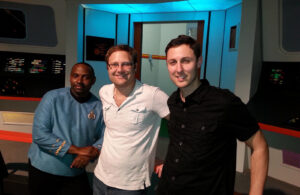 Brady would go on to direct the project, help refine the screenplay, and do post production editing and effects (while Pittsburg resident CRAIG FREY, JR. did exterior effects). “I must give 100% credit to my dear friend Brady Foster,” acknowledges Michael, “who fully volunteered to help in any way that he could in making Valiant a realty. We had such a good time on ‘Legacy’ and formed a really good friendship, and to this day, he has helped on every project that Valiant has done. I could not ask for a better, more down-to-earth person to help in bringing my vision of Trek. But then, we all were a family, and it was our love for not only Trek but also each other that made these productions so much joy.”

Once Brady was brought on and he and Michael finalized the script, it was time to choose a cast. Some roles were small, others were major, but Brady felt strongly that the production would benefit greatly from bringing on an experienced acting coach. After all, if there wasn’t much budget (the total spent on “Legacy” was about $400, according to Michael), then the acting was going to have to carry the film.

Brady brought in his friend and colleague BEN RICHARDSON as an acting coach, and Ben would also later serve as film editor. So what exactly does an acting coach do? Fortunately for us fans, Michael was determined to document as much of the filmmaking process as possible, and one of the videos shows Ben and Brady in action working with Michael and SHIRLEY AMAURIC, who plays Admiral Parker (a close, almost-surrogate mother figure for Michael’s character of Commander Bishop)…

With the script finalized, the cast selected, and the bridge set ready for filming, it was finally time to shoot some Valiant! Running on such a low budget, the crew had to borrow uniforms from John Hughes that were going to be used for Ajax, as well. Because of delays with Ajax, Starship Valiant would actually end up being the the first completed Star Trek fan film to be shot at Starbase Studios. Therefore, they were also the first production to discover that the weather outside could be a VERY significant factor in filming, as the storage building housing the set had no air conditioning and no heating (and no bathrooms!). But at least the rent was free.

The first day of filming had temperatures in the 30s. The crew actually had to keep space heaters next to the actors so their breath wouldn’t show up on camera! You can see one of those space heaters by the feet of actress APRIL CHAMBERLAIN in this video of her being coached on set by Ben Richardson and directed by Brady Foster…

With production having started in September of 2013, work was completed the following June, just prior to the local SoonerCon in Midwest City in central Oklahoma. And when I say “just prior,” I mean JUST! Brady Foster was doing last-minute editing on the film, and he arrived at the convention barely 15 minutes before they needed to show it! Brady had been up all night with all kinds of computer problems. But he made it, and the convention attendees on Friday night were the first fans ever to see Starship Valiant.

This is the version that premiered at the con to a very positive (although admittedly small) audience. It was posted to YouTube shortly thereafter…

Early the following year in 2015, Michael was contacted by SoonerCon organizer AISLINN BURROWS asking if he’d like to show “Legacy” again during the next convention at the end of June. Michael jumped at the offer, but then he almost immediately had an exciting idea. By this point, many fans had now watched Starship Valiant: “Legacy” either the previous year at SoonerCon or on YouTube…so they would know what to expect.

But what if Michael were able to add in NEW footage that no one had ever seen before?

Next time in Part 2, we look at the 2015 creation of “Legacy: The Special Edition“ and why it Michael King felt it so important have an ethnicallly diverse cast.