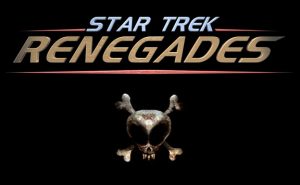 RENEGADES: THE SERIES just hosted a movie theater premiere in North Hollywood, California for their first full one-hour episode, “The Requiem.” But before there was Renegades: The Series, there was STAR TREK: RENEGADES, one of the largest, most ambitious fan film projects ever attempted.

Nearly four hundred thousand dollars in crowd-funding, multiple Star Trek veteran actors reprising their roles from the various TV series, paid industry professionals on both sides of the camera, two years in the making, enthusiastic plans to present this to CBS as a potential pilot for a new Star Trek TV series, and even a gala Los Angeles red carpet premiere at the historic Crest Theater in Westwood.

Looked at through the hindsight lens of the constraining limitations of the post-guidelines reality we now live in, it’s hard to imagine that something like STAR TREK: RENEGADES could even have been attempted, let alone successfully completed and released with such fanfare. How on earth (or in space) did they manage it?

Let’s set the Guardian of Forever back to the year 2006 and the last day of filming for the Trek fan film STAR TREK: OF GODS AND MEN. You can read more about that earlier project in this blog entry. The three writers—Jack Treviño, Ethan H. Calk, and Sky Conway—were filming some final scenes at the Laurel Canyon Studios in Arleta, CA. Many of the scenes for Of Gods and Men had been shot on James Cawley’s TOS sets at Retro Studios in upstate New York. Some were shot on location. And the rest were shot at Laurel Canyon Studios. 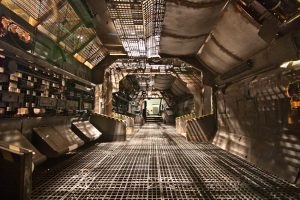 That particular studio features panoramic green screen walls along with a standing set of a “derelict spaceship” (the renting of which can save a LOT of money in set construction costs). Of Gods and Men was using the green screens for a number of scenes. But on the last day, they were filming scenes with Ethan Phillips and Gary Mitchell on the derelict ship, which was constructed specifically to look old and weathered and dingy…very UN-like the pristine corridors of most Federation starships.

Having sincerely enjoyed the entire film-making process, despite a grueling shooting schedule, Sky Conway (who was also producer) challenged his co-writer to come up with an idea for an ongoing Star Trek series they could all do together.

As he looked around the derelict set between takes, Jack Treviño came up with an intriguing suggestion. Why not do a Star Trek series where the crew has to work “outside” of the normal constraints of Starfleet? It wouldn’t be a Starfleet crew, per se, but they would be doing the “dirty work” of the Federation. “It’s The Dirty Dozen meets Star Trek!” Jack said. Sky Conway loved the idea.

The three writers of STAR TREK: OF GODS AND MEN and STAR TREK: RENEGADES

Obviously, Gene Roddenberry’s dream was for an optimistic “idealized” future….not a dark one. But the idea was that peace and prosperity don’t always come the easy way, and sometimes you have to get your hands dirty. Whom does Starfleet call when the job needs to be done not necessarily in the way Starfleet would do it?

That was 2006, and the last of the three segments of Of Gods and Men wouldn’t be completed until 2008. Then things sorta hibernated for a while. Stuff happens, and Hollywood can be a busy place. Also, the recession dried up a lot of investment funds for a few years.

But then Kickstarter happened…

In 2012, Star Trek fan films had only just begun to test out Kickstarter… with pretty miserable results! In January, a project called Star Trek: Excalibur tried to raise $75,000 but barely raised $2,000 from just 47 backers. Strike one. In February of that year, Star Trek: Secret Voyage tried to do a Kickstarter campaign with a much more modest goal of $5,000. Their result was a terribly disappointing $70 from just 2 donors. Strike two.

But these experiences taught fan filmmakers an important early lesson: if you build it, they will NOT necessarily come. Kickstarter campaigns were a very new concept for potential donors. Not only did you have to bring people to your Kickstarter page in the first place, you also had to A) explain what a “Kickstarter” was, and B) convince them that you weren’t just going to take their money and buy a sailboat (or sushi).

What Sky Conway and his team realized was that they couldn’t just do this by the seat of their pants. They planned out their Kickstarter for months in advance, first locking in the big names of WALTER KOENIG to play Admiral Pavel Chekov and TIM RUSS (who would also direct, just as he had done for Of Gods and Men) to reprise his role of Tuvok. It made sense that these two would work together at Starfleet, as Chekov and Tuvok both served in Security (Chekov moved from navigation to tactical in the movies). Possibly, there might even be a Section 31 connection. The details were still being worked out. But the excitement for fans was that this major fan film would pick up after Star Trek: Voyager ended…showing what happens to certain favorite characters. 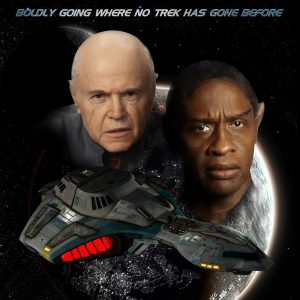 Other Trek and sci-fi actors were added to the cast list prior to the Kickstarter, some reprising their Star Trek roles, others not. These included:

A few actors were initially listed and then had to bow out. These included Ethan Phillips and Garret Wang from Voyager (who both had scheduling conflicts) and J.G. Hertzler from Deep Space Nine (who was supposed to play the bad guy Borrada). His scheduling problem was that he was running on the Democratic ticket for the Town Board of Ulysses, NY. He was elected just days after the filming wrapped on Renegades in October of 2013…so I’d say he made the right choice!

There was also a solid team behind the camera—many of whom were already well known and loved in the world of fan films—and some with fairly impressive Hollywood resumes, as well.

All in all, a very impressive line-up right out of the starting gate!

The Star Trek: Renegades team set an ambitious goal of $200,000. Did I say “ambitious”? Considering the earlier failures of other Trek fan film Kickstarters just months earlier, that number seemed downright unrealistic to many!

And perhaps it was. But that’s what they needed to do this thing right…even with SAG actors working for the lowest union scale they could and others working for discounted rates or even for nothing at all. There would still be costs to make a 90-minute feature-length film of quality. And the producers were either going to do this right or not at all.

With almost no funds to work with yet (hence, the Kickstarter campaign), the team again rented out the green screens at Laurel Canyon Studios, borrowed a couple of costumes, and filmed a short 1-minute intro video for their Kickstarter page:

Another video featured only Walter and wasn’t nearly as polished, but it was fun and showed his dedication to the project:

Before I end part one, I’ll leave you with one amusing tidbit to show just how different things were back in 2012. Here’s what their Kickstarter page said under “Risks and challenges“:

There are always risks and challenges when making a film – actors dropping out, locations and/or sets not available, unforeseen costs, equipment trouble, etc. We feel we are up to the challenge, and have proved ourselves to be 100% capable of completing this project. Our previous project, Star Trek: Of Gods and Men, was just as ambitious, just as challenging, and we completed it in a timely manner on a slightly smaller budget than which we are asking for this project. We are a proven team and we feel we have all the skills, contacts and resources necessary to complete our project.

Notice anything missing? Yep, there was no mention anywhere that Star Trek is owned by CBS! As I said, things were VERY different back in 2012!!! Instead, here’s what they said about CBS:

It is our hope that CBS finds “Star Trek: Renegades” to be a worthy endeavor and will continue the Star Trek franchise and legacy as an online episodic series (or on their own broadcast or cable network).

Such optimism! Such a different time for Star Trek fan films!

The Kickstarter went live on September 27, 2012. Could Renegades go where no Star Trek crowd-funding campaign had gone before?

Come back next week Part 2!