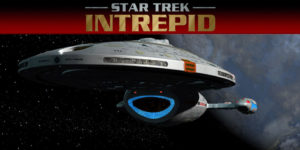 Last week, we met show-runner NICK COOK and his crew of the fan series STAR TREK: INTREPID, based in Dundee, Scotland. In November of 2007, just six months after they released their first episode “Heavy Lies the Crown” in May, fans got their second taste of Intrepid. But it wasn’t an episode produced entirely by Nick and his team in Scotland. This was a crossover fan film with the long-running fan series STAR TREK: HIDDEN FRONTIER, shot in Pasadena, CA in collaboration with ROB CAVES and his Areakt Productions. The name of this 12-minute fan film was ORPHANS OF WAR….

Hidden Frontier had already had an impressive run, with fifty episodes (about a half hour each) released from 2000-2007. By the time that the crossover with Intrepid was released, Hidden Frontier had already ended its seven-season run, and a new fan series from Areakt had debuted: STAR TREK: ODYSSEY. The first episode, “Iliad,” tied in directly with Orphans of War and was released just two months earlier.

Intrepid‘s second solo episode, “Where There’s a Sea,” wouldn’t debut until the following summer. So as my in-depth interview with Intrepid show-runner Nick Cook continued, I decided to spend time discussing Orphans…

JONATHAN – We already discussed how you and Rob Caves had become friends, and he facilitated having his HF actress, RISHA DENNEY, film a guest spot for your first episode playing her character of Captain Elizabeth Shelby of the USS Excelsior. And her chemistry with Captain Daniel Hunter, the character you play, turned out to be “lightning in a bottle,” as you called it.

So how did you go from just “borrowing” an actor for a brief cameo to doing a full-on crossover (what turned out to be, I believe, the FIRST full crossover collaboration between two Trek fan series)?

NICK – I know CHRIS CLARKSON, the original Azhan, had lobbied for a cameo on HF when he was visiting Los Angeles, and Rob was kind enough to accommodate it. I’d also had some early discussions with Rob about a character from HF appearing on Intrepid, and he’s always been willing to work with us. Initially I’d envisaged a Henglaar cameo, but eventually decided Shelby might work better and be more fun.

So basically, the cameos set the stage for a full on crossover. I honestly don’t recall who first proposed doing Orphans; it may have been a mutual decision. BRIAN MATTHEWS may also have helped drive that one. Either way, I think it was just a natural progression given the ongoing friendship and collaboration between both groups. It just made sense. 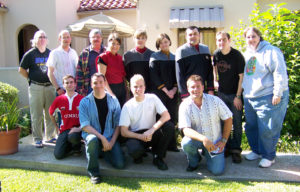 Two crews team up at a little house in Pasadena, CA to film the crossover fan film “Orphans of War.”

JONATHAN -So when did you decide to actually do the crossover?

The actual process was pretty quick. Rob recruited Brian Matthews to write the script, and we all collaborated to an extent on the plot, though I think it was mostly Rob’s story. Brian had the script done pretty quick, the major problem was coordinating everyone’s schedules. That was possibly the trickiest part. We knew we would be visiting Los Angeles on holiday, so it was a question of making sure everyone’s schedules could match up. DAVID REID, who plays S’Ceris, was only going to be available for a few hours, so the script was written to allow him to appear but then bow out.

The shoot itself was very quick and efficient, but then Rob and his team had been doing this for years at this point, so they knew what they were doing. It was a great experience. Rob took the lead on editing and effects, and the entire thing was finished in a matter of weeks from the time we shot it.

JONATHAN – Is it true that ROD RODDENBERRY himself came to the Hidden Frontier set while you were filming Orphans of War? 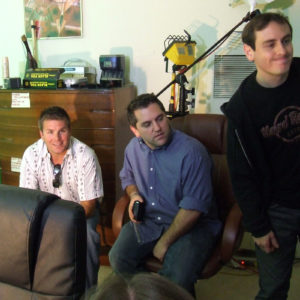 NICK – Yes, it was the Orphans shoot when Rod Roddenberry visited and interviewed everyone for the webcast he was running at the time. Having a Roddenberry on set for the shoot was actually pretty cool.

JONATHAN – Was he into it, or did you guys just seem like a weird group of obsessive fans to him?

NICK – Actually, he did seem genuinely interested in what we were doing, what Star Trek meant to us, and how it had impacted our lives. I don’t tend to deify Roddenberry like some, but I do admire the man and the work he did. So it was certainly a thrill to be shooting a Star Trek fan film with a Roddenberry on set. He was there for a few hours, interviewed us for the video podcast he was doing , and if I recall correctly, he did watch us shoot for a while.

JONATHAN – Okay, let’s shift back to the regular Intrepid series. Now that you’d released your first episode plus the crossover, did you feel like you had to be even better with your next episodes?

NICK – No, we didn’t feel any serious pressure to top what we’d done before. We knew we wanted to improve our production standards, which is why we invested in a new camera (or two) and a new mic. But mainly we just wanted to continue the story we’d started—although that proved harder than anticipated.

I do think the writing improved, though. I was making a conscious effort to try and serve the different stories and characters and give everyone their moment in the spotlight, although I’m not ultimately sure I did as well as I would have liked on that front. 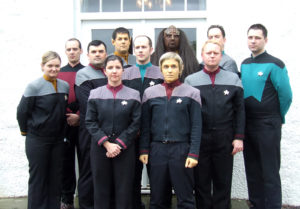 NICK – Momentum wasn’t a huge issue at this point because I think we were pretty excited to keep going, and we’d had quite a boost from all the media coverage. If anything, we were more enthusiastic and more motivated to get it done. At this point, we were still having a lot of fun on the shoots, so that helped too.

JONATHAN – Okay, over the next four years, you released five Intrepid fan films (plus two additional crossovers, which we’ll get to later). These episodes ranged in length from 5 minutes to a half hour. But what confused some fans was that they were released in one order but were intended to be watched in a totally different order. Here’s the order in which they were released:

But here’s the order they should be watched in if you want to view them chronologically:

That’s quite a jumble! So what happened there, Nick?

NICK – There’s different reasons. We had several scripts of varying lengths floating about at this point, and there was supposed to be an overarching story here. The main reason they are all released out of order, and in some cases shot out of order, is that some proved easier and quicker to shoot than others.

I do recall that we would often find that production time on various episodes would depend on who was editing and who was providing elements, such as effects, sound, and score.

“Machinations” was supposed to be quick and easy—it ended up being only seven and a half minutes long—but the amount of green screen work made it slow to produce. It’s the only episode someone outside the usual crew edited. We were lucky to have RIC FORSTER—who we first met when he came and shot a piece on Intrepid for the Sci Fi channel—come and work with us for a bit before he emigrated to Australia. Ric came and did camera for our later episode “The Stone Unturned,” but he was also gracious enough to do the editing on “Machinations.” Of course, he had to fit that in around his professional work, so it took longer than we’d originally envisioned. But Ric did a great job, and I was grateful to have his time and expertise. It was a real boon.

For “Transitions and Lamentations,” which ended up running 29 minutes, I think we’d learned quite a few lessons about the filming process, so we were a little more slick. But we also ran into the usual problems with weather. We did a lot of location shooting and spent a lot of time getting cold and wet…quite a bit of that in a very drafty, cramped cave! 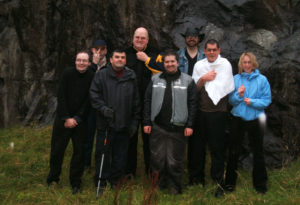 On the other hand, “Confessions by Firelight” and “Turning Point” were a simple case of having a couple of short easy films to shoot. Each one ran about 6 or 7 minutes. We shot each in a day. “Turning Point” was shot, edited and released in about 3 weeks and remains the quickest turnaround we’ve ever had on a film. One of these days we may beat that.

JONATHAN – So of these five episodes we’re currently discussing, what was shot when? And when were they released?

“Turning Point,” as mentioned, was shot in a single day in September 2008 and was released the following month.

“Transitions and Lamentations” was shot between August 2007 through until October 2008. It was released in May 2009.

“Machinations” was shot early on in 2007 and 2008. As I mentioned, though, it needed a lot of post-production work and wasn’t released until August 2011.

“Confessions by Firelight “was also a single day shoot taking place in Autumn 2011 and released in November of that year.

JONATHAN – All right, now that we’ve made it to 2011, let’s jump back to 2008…don’t get too dizzy! But while you were making these five Intrepid episodes, you also shot and released TWO additional crossovers with Hidden Frontier. The second of your three crossovers with HF was OPERATION BETA SHIELD, released in October of 2008, a year after your first crossover. 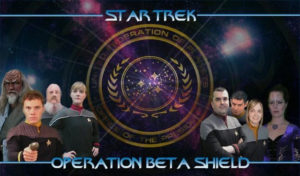 NICK – That’s correct. The scripts for both seemed to come together pretty quickly. On Orphans, I think both Brian Matthews and Rob Caves came up with the plot and then Brian wrote it. On Beta Shield, it was, as I recall, a little more collaborative, with a little more discussion between the three of us on the plot before it was written. I think both Rob and I gave some feedback to Brian before the final draft, but it overall came together really quickly.

JONATHAN – And then your third and final crossover with Hidden Frontier was ONE OF OUR OWN. That one came out in late November 2010…so you skipped a year?

NICK – I’m not sure why we didn’t do anything in 2009, but I don’t think it was any sort of conscious decision. We just didn’t.

JONATHAN – Fair enough. After all, you’re in Dundee, Scotland, and Rob and his team were in Pasadena, California. So how did One of Our Own come to be?

Next time, our look back at the history of Intrepid concludes with a look forward at what’s to come. But before we get there, we discuss the last of the HF crossovers plus what is possibly Intrepid‘s most well-known episode…featuring a guest appearance by none other than…Captain Jean-Luc Picard??? We also revisit the most recent Intrepid releases and find out how the fan film guidelines affected this long-running series. Don’t miss it!

In the meantime, you can watch all of the Intrepid fan films here.