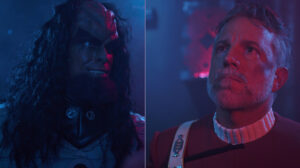 Two months ago, I published a blog interviewing JOHNNY K., the producer and director of the new fan series FARRAGUT FORWARD. It’s a “sequel” series to the long-running STARSHIP FARRAGUT, which recently released its own series finale, “HOMECOMING” on October 1…after five years in post-production! (And if you’re wondering why I haven’t covered that release yet, please help me nag showrunner JOHN BROUGHTON, writer PAUL SIEBER, and post-production supervisor/composer STEVEN SEMMEL to finish writing up their answers to my interview questions.)

For the past several months, Johnny K., John B., and the Farragut Forward team have been hard at work building sets and props, polishing the script for the debut episode, and even creating physical ship models in order to film their visual FX the “old fashioned way”—none of this new-fangled CGI nonsense!

On October 16, cameras began rolling for the first time on the new series, shooting footage for what will be an initial 3-minute “teaser” prologue to the debut episode. The first look fans got came earlier this week with three photos posted on the KAOTICA STUDIOS Facebook page… 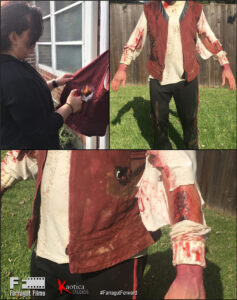 Talk about firing an actor!

Fun fact: it takes the Farragut Forward costuming team weeks of painstaking work to recreate accurate uniforms for our production. The attention to detail is extraordinary. It takes costume assistant Belle Bredehoft just a few seconds to light those items ON FIRE!

The next day, Kaotica released two new images from the actual footage shot in 6K on the set. You can see John B. below as Captain Jack Carter of the U.S.S. Farragut in the Wrath of Khan movie era (wearing a gorgeous and properly-fitting “monster maroon” uniform)… 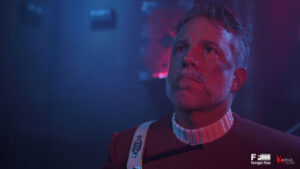 From the NEWS section of the Kaotica Studios website, John Broughton had this to say (reprinted with permission):

A lot of preparation and hard work went into last weekend’s shoot which paid off in being well-organized, professional, and successful in best capturing our story. More importantly, the film shoot was FUN, which at the end of the day, is what this is all about, right?

It was surreal playing Captain Carter again and wearing a Starfleet uniform, but like an old worn glove, it fell right into place, and this time, it was a bit more natural. It’s great working with Johnny K., Kaotica Studios, and all the talented cast and crew in bringing the next chapter of Farragut to life and in in the best ‘light’ (or perhaps ‘low-light’). Thanks again to everyone involved! 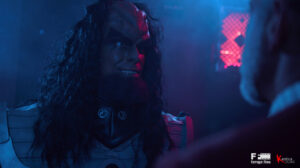 William had this to say:

The morning of the shoot I was very excited. I’m not used to being on film sets, and it helped that it was a group of friends that were working together. At first, I felt a little stiff and focused on letting the costume and makeup do the heavy lifting, but as the day went on, between helpful comments from director Johnny K. and feeding off of the other actors, I can’t imagine how the shoot could’ve gone any better.

Johnny K. who is both directing and providing cinematography, says, “I get pretty picky about my lighting. It’s a passion of mine. I’ve probably thrown away some really great performances if the lights looked wonky.” For anyone curious, Johnny is shooting this fan film on a Black Magic 6K Pro Cinema camera.

Johnny is a huge fan of the two NICHOLAS MEYER Star Trek feature films—The Wrath of Khan and The Undiscovered Country (along with The Search for Spock). The darker tone of the new Farragut Forward, set in one of Johnny’s favorite eras of Trek, plays well to his strengths as a filmmaker…

When I first read the script for this prologue, I could immediately picture it in the movie era. It has an edge to it, similar to the dark undertones of what was going on in the movie era with the death of Spock, Kirk’s son, etc. And there was none of the campiness that came along with The Original Series, so I jumped at the chance to direct the project. If this Farragut story had been set during the 1960s TOS-era, I wouldn’t be a good fit, but the movie era is right up my alley. Besides, who doesn’t want to shoot a dark, hazy room of Klingons? 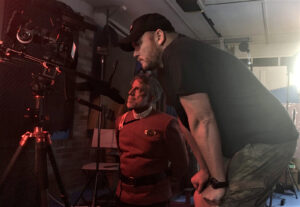 John B. and Johnny K. watch some of the footage that was just filmed.

The 3-minute prologue will be released soon and will serve as the teaser for the planned full 30-minute fan film.