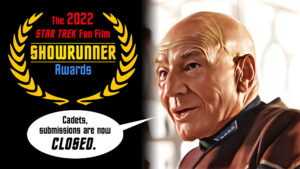 My friends, the great experiment: THE SHOWRUNNER AWARDS.

In January of this year, two new fan film competitions launched, to join the third (the long-running annual BJO AWARDS) in celebrating our fun and quirky little niche-of-a-niche-of-a-niche of fandom. The first of the two new yearly award shows to begin—and conclude—was the DIRECTORS CHOICE AWARDS, where the directors of the submitted fan films became the judges (and were not allowed to vote for their own fan film, of course). And once those awards were handed out, it was time to launch of the new SHOWRUNNER AWARDS.

Both first-time contests had fresh and unique aspects to them. For example, for the past almost-decade, ERIC L. WATTS of the Bjo Awards automatically entered any Star Trek fan film from the previous year that met the eligibility requirements. So a fan filmmaker didn’t have to do anything to be considered for a Bjo aside from release an eligible fan film in the previous year. The Directors Choice and Showrunner Awards, however, each required a small $10 submission fee to enter (in order to prevent a flood of entries). The Directors Choice also opened their contest to fan films beyond Star Trek—Star Wars, Harry Potter, etc.—while the Showrunner Awards limited ourselves to only Star Trek fan films.

Meanwhile, the Showrunner Awards created categories for Best Original Character, Best Scene (a short clip up to two minutes in length), and Best Micro-Budget ($1,000 or less) Fan Film. We also decided to do something the other two contests don’t do: give out THREE awards per category rather than just one winner and five finalists or one winner and one runner-up.

I keep saying “we” when referring to the Showrunner Awards. That’s because our panel of twelve judges—each the showrunner of a Star Trek fan film or series—brainstormed, discussed, and voted on our categories, entry fees, and rules. Among those rules is that we will use ranked-choice voting, each judge selecting their five favorites in each category in descending order. First choice gets 10 points, second gets 7, then 5, 3, and finally 1 point. A judge cannot vote for their own fan film in any of the top three slots.

For me, the most interesting aspect of the Showrunner Awards was our decision expand eligibility to a 5-year window. For our 2022 awards, any Star Trek fan film released from January 2017 through December 2021 could enter. Of course, that aspect of the “great experiment” carried some risks…

While I thought it would be interesting to give fan films multiple chances to win (if you don’t win one year, enter again the next year, or the next, or even the one after that), there was always the possibility that we’d get flooded with entries. And with all of our judges being volunteers, I worried they might each have to end up watching thirty, forty, or even fifty hours of Star Trek fan films!

Fortunately, it looks like we’re going to time out at just a smidge under thirteen hours of viewing time, which hopefully isn’t too burdensome. We’ve received a total of 38 submissions, which is pretty darn close to the 39 that the Directors Choice Awards received (and remember: they were open to non-Star Trek fan films, as well as Trek ones). So the $10 entry fee doesn’t seem to bother most fan filmmakers.

On the other hand, AARON VANDERKLEY of Australia produced five excellent NX-era fan films that had won multiple awards previously, and four of them were eligible for the Showrunners. However, he didn’t enter any of them, opting instead to submit only his Voyager-era fan film from last year, BEYOND THE SUN. When I asked Aaron if he wanted to submit any other fan films from previous years, he said, “I think it’s good to move forward and make sure the newer cast/crew have an opportunity to be recognized too.” GLEN WOLFE and DAN REYNOLDS also entered only one episode of THE FEDERATION FILES, not wanting to compete against others of their own fan films and figuring they could enter their later releases in the coming years.

And so there you have it: infinite diversity in infinite combinations of rules, judging panels, categories, windows of eligibility, and contestant decisions of which films to enter! I love it when a plan comes together.

At this point, my next MAJOR task is to create on online form for the judges to use to rate the various entries and then wait for them to vote. Judges will have until late August, as I’d like to announce the winners on September 8 of this year.

Here are the fan films that we’ll be judging in alphabetical order (PACIFIC 201 and TEMPORAL ANOMALY are both in two parts but count as only one fan film each). It’s an intriguing and exciting list…