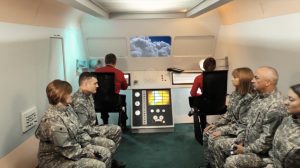 Just before the start of the new year, the anthology series THE FEDERATION FILES released its third full episode: “Extraction.”  Produced by GLEN L. WOLFE and DAN REYNOLDS, this episode was written by Glen and features Dan as the captain of the USS Nikita, a dreadnought-class starship.  Glen also appears briefly as a shuttlecraft pilot.

But the cast is much more extensive than that.  The 12-minute fan film features Romulans, a Starfleet bridge crew, shuttlecraft pilots, and a team of TOS-era MACOs.  The episode also features a Starfleet shuttlecraft interior set that took about four weeks to build.  The control console, front view ports, and one panel on the the left side were supplied by JAMES CAWLEY and were used previously for one of the episodes of Star Trek: New Voyages, “The Holiest Thing.”  Glen and Dan built out the rest or the interior, including the iconic lightbox ceiling, and the electronics were custom made by Glen.  The shuttle interior remains standing at Dan’s WARP TV studio in Harrison, Arkansas, available to use in future fan films.

The rest of the episode was filmed both at STARBASE STUDIOS (mostly before the recent controversy) and by a second unit in a rock quarry close to the Harrison studio during a few hours while Romulan make-up was being applied to JIM VON DOLTEREN and ALLYSON MARX back at the studio.  In total, about four days were spent filming all the scenes, mainly during July of last year.

Dan reports that he and Glen will soon be choosing one of the remaining ten scripts that Glen has already written to film as their fourth production in The Federation Files anthology series.  Now that Glen has moved to Arkansas, Dan expects them to have a lot more time to brainstorm, write, create, and produce new Star Trek. .

How quickly the next episode gets started and  produced depends on the resolution of the current lawsuit regarding the Starbase Studios sets.  From what I understand, there is some hopeful progress happening in that situation.  I’ll report more as soon as I’m cleared to.

In the meantime, enjoy “Extraction”…