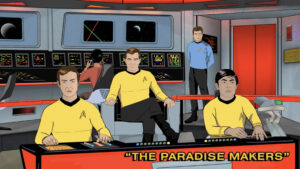 Back in 1973-74, a production company called FILMATION produced 22 episodes of an animated Star Trek series featuring Kirk, Spock, McCoy, and the rest of the original series crew (except Chekov). The animation style was simple and relatively inexpensive to produce. Nowadays, animated Star Trek series like LOWER DECKS and PRODIGY are positively stunning, but back then…well…we were just happy to have ourselves some new Star Trek stories on TV on Saturday mornings (even if half of the voices sounded like JAMES DOOHAN!).

The illustrated, simple cartoon style of the original animated series has been recreated over the years several times by Star Trek fan filmmakers. Among them are the many Trek fan films of CURT DANHAUSER, all of which can be accessed from this playlist) as well as two animated episodes from the long-running fan series STARSHIP FARRAGUT, “Power Source” and “The Needs of the Many.”

I’ve sometimes wondered which would be an easier project to produce—a live-action Star Trek fan film or an animated one? The former, of course, would require costumes, makeup, sets, lighting, sound, and proper camera work. The latter, however, would require hand drawings of each new scene, and frame-by-frame animations of the various characters…even if the only things moving are the lips and eyes. Both kinds of productions could easily take months or even years to complete, each with its own time-consuming challenges.

But no matter which format you choose, let me assure you: completing a single fan film story that is more than TWO HOURS long…that is a Herculean task just by itself! But that is exactly what I recently discovered on YouTube: an epic length, high-quality animated Star Trek fan film done in a style similar to the Filmation episodes from the 1970s. Titled STAR TREK: THE PARADISE MAKERS, this production was posted to YouTube in two parts back in 2017. Trust me, you’re gonna want to take a look…

Yeah, it’s a LOT of fan film to get through, but isn’t it really impressive? I certainly thought so! And so I tracked down the fan behind the film, Mr. GASTON HUCKABAY of Dallas, TX, and asked him for an interview.

Gaston has a lot to say about this passion project, how many years it took to complete, which major Star Trek novelist helped him with the production, and the heartbreaking tragedy that happened while Gaston and his team were working to complete it. He also explained why he believed it would be okay to release a two hour and fifteen minute long fan film one year after the fan film guidelines limited the length of Star Trek fan films to 30 minutes.