Fan Film Friday – The 35-year history of YORKTOWN: A Time to Heal (Part 1) 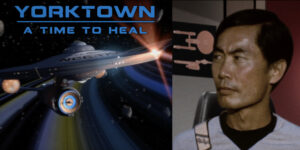 If any footage can be considered “the holy grail” of Star Trek fan films, it’s the Super-8 scenes from YORKTOWN: A TIME TO HEAL, shot in 1985 to 1987 and featuring actor GEORGE TAKEI reprising his role as Lt. Cmdr. Sulu during the time between TOS and Star Trek: The Motion Picture.

Thirty-five years (and counting!) in the making, Yorktown is probably the most eagerly awaited, exciting, and mysterious Star Trek fan film of all time! And so many fans have so many questions…

Well, it’s ALMOST finished! In fact, a new trailer was recently released (the first new trailer since 2013), promising a release date of this Christmas. The footage looks amazing—see for yourself…

There’s no shortage of stories about this project scattered all over the Internet…some less accurate than others. But now it’s time to set the record straight and collect all of these mind-blowing details together in a series of fascinating blogs that will feature direct quotes from original show-runner STAN WOO and current show-runner JOHN ATKIN.

It’s hard to pick one thing about Yorktown: A Time to Heal that’s the most interesting. Obviously, it’s one of the first (if not THE first) Star Trek fan film to feature a member of one of the television casts in their same iconic role…plus other professional actors in major roles. But after a veritable sprint of filming over the first two years, things virtually stopped completely for more than two decades!

Then, once things started up again, fan filmmakers from all over our community got involved to help out. Scenes were filmed BOTH at Starbase Studios in Oklahoma AND on James Cawley’s TOS sets in Ticonderoga, NY (one of the only fan projects other than STAR TREK: NEW VOYAGES to ever do that). People who worked on AXANAR, STAR TREK CONTINUES, NEW VOYAGES, RENEGADES, STARSHIP EXETER, STARSHIP FARRAGUT, STARSHIP ANTYLLUS, STAR TREK: SECRET VOYAGE, STAR TREK: EXCALIBUR, TEMPORAL ANOMALY, STAR TREK: OF GODS AND MEN, STAR TREK: DECEPTION II, THE FEDERATION FILES, and so many other fan productions all pitched in at one point or another to help Yorktown: A Time to Heal move ever closer to completion.

Are you ready to jump down the rabbit hole? I promise, it’ll be worth it…

BEFORE THERE WAS YORKTOWN, THERE WAS ALSO YORKTOWN

Okay, there’s a LOT of back story on this project, and to start, we need to set the Orb of Time back to 1981 when Los Angeles high school junior Stan Woo produced a “made in your garage” (his words) Star Trek fan film titled YORKTOWN: IN TEMPORARY COMMAND. Stan finished the film three years later, and although it has never been released on the Internet, it did win the Sweepstakes Trophy for Best Science Fiction Film at the Hollywood Teenage Film & Video Festival in 1984. (The award was presented by actor ERNIE HUDSON, who’d played Winston Zeddemore in the just-released Ghostbusters movie.)

Despite the win, Stan wasn’t feeling happy about the project. “In the 1980s,” Stan explains, “Star Trek fan filmmakers were shunned by the amateur filmmaker community. The consensus was that Star Trek fan films were a waste. People saw the money put into my high school fan film and thought the money could have been put to better use in original films. At the time, everyone’s dream was to sell to cable, and Star Trek fan films couldn’t be sold. To justify myself in the 80’s, I tried to explain to my peers that I was making a FAN film—a take on the “fanzine” concept—but to no avail. I didn’t care because I made Yorktown for me…a chance for my friends to get together.”

Stan remembers his motivation to produce another Star Trek fan film:”RALPH ROGERS of the Hollywood Teenage Film Festival was the only person who encouraged me to continue. Yes, our high school fan film won a Sweepstakes Trophy for Science Fiction at his festival in the fall of 1984, but we’d won by default because we were the only science fiction entry! We were further dissed by the amateur filmmaking community, and that was my impetus to make Yorktown: A Time to Heal. The title of film conveyed the pain that we were feeling. I finally felt vindicated when James Cawley ignited the big fan film revolution in the 2000’s.” 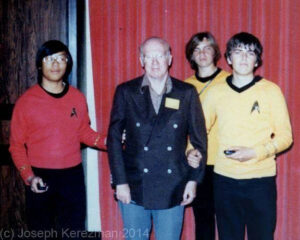 A young Stan Woo, Roger Whiter, and Joseph Kerezman with John Fedler (Mr Hengist from the Star Trek episode “Wolf in the Fold”and the voice of Piglet from Winnie the Pooh)

So in 1984, Stan and his friend DOV SCHWARZ wrote a new script for what was originally called Yorktown II: A Time to Heal. The “II” was later dropped when George Takei signed onto the project, as Stan no longer wanted the new film to be seen as a sequel. The high school fan film was a “dry run,” as it were, to get the kinks out. This time, though, it would all be for real.

Stan came up with an early draft of the screenplay. Then Dov took that draft and ran with it. “Dov’s script was a no-holds-barred version with bridge scenes,” Stan recalls. “I whittled that script down so it would have no bridge scenes, since we knew we did not have the resources to build a bridge, and the film was only ever meant for a ‘friends and family’ audience. Also, we wanted to enter the film in the Starlog Cinemagic Film Contest, which had a 15-minute run time limit. So instead, I planned to use voice-overs with short FX shots of the starship in place of full bridge scenes.”

THE SEARCH FOR SULU

Actually, Sulu wasn’t all that difficult for young Stan to find. In fact, Stan had kinda “chased down” George Takei at events like the Chinese New Year parades since the age of twelve, always seeking out George at the end of the parade route or on autograph lines and chatting with him about Star Trek. Throughout the next several years, friends of Stan who also knew George would invite the youngster to come to events where George would be in attendance. Even Stan’s psychology professor, JUDY CHU (who is currently a member of the U.S. Congress) made sure that Stan had a seat any time George Takei was giving a guest lecture at UCLA or other venues.

“George always remembered me by face,” says Stan, “because I ‘Stan’ out as a fan from all those meetings in the past.”

The chance to ask George to be in his fan film came in 1985 when Stan was 21 years old at a fundraising dinner for Stan’s distant cousin, MICHAEL WOO, who was running for the Los Angeles City Council that year. Stan’s father, JEM ONG WOO, was volunteering on the campaign, as was George Takei. Knowing that George would be there, Stan asked his father if he could attend, as well. Since Stan was such a big Trek fan, no one gave it a second thought to Stan being there. 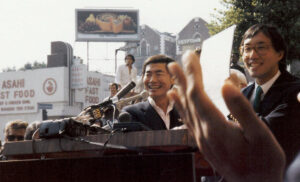 “I attended for the sole purpose of asking George to appear in my Yorktown film,” Stan admits. “Before approaching him, I went to the bar and got a glass of burgundy, which I offered to George when I walked up to him. I don’t remember exactly what I said, but it was pretty direct. I was making a Star Trek fan film, and I wondered if he would be interested in playing Sulu. George was very friendly about it, and he gave me his phone number and address, asking me to send him the script to review.”

Stan went home and quickly wrote a part for Sulu into the script. Initially, the story gave Sulu a son named Jeffrey Pond (who would be played by Stan), who had lost his fiancée to a terrorist attack and was living alone on a planet that Sulu beams down to (this plot point, I’m told, has been edited out of the final version and left vague). With the rewrite complete, Stan hand delivered the script to George at a Creation Convention. George read it, liked it, and it was a done deal. No agents, no studio contracts…just a favor for a friend. It was really THAT easy!

YORKTOWN: A TIME TO HEAL IS A GO!

Once George Takei was confirmed as part of the project, things began to move very quickly. The script now had Sulu assigned temporarily to the U.S.S. Yorktown while the U.S.S. Enterprise was undergoing refit, and the uniforms would be a hybrid of the TOS style tunics and those of Star Trek: The Motion Picture. Noted fan film costumer KATHY PILLSBURY designed the Yorktown uniforms based on concepts from Stan. Kathy and fellow fan costumer JOE KEREZMAN (who later worked on Trek fan films including STAR TREK: SECRET VOYAGE, STAR TREK: EXCALIBUR, and STARSHIP FARRAGUT) were also cast in small roles in Yorktown. In fact, there were a LOT of people cast in roles. On one shoot, Stan reported having 31 extras plus actors and a production crew for a total of about 40 people! 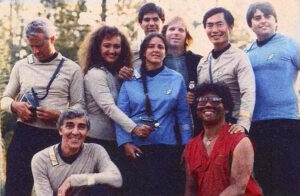 Beginning in April of 1985 and continuing through that November, Yorktown would have ten separate shoots in various locations. Interestingly, the shoots with George Takei took place in the Chilao Flats campground in the Angeles National Forest…just four miles away from Charlton Flats, where some of the “Montana” scenes from Star Trek: First Contact would be filmed eleven years later (specifically, the location where the statue of Zefram Cochrane will be erected in the future). Other filming locations (for those familiar with Los Angeles) included Switzer Falls, Griffith Park, the Student Union at California State University – Los Angeles, the Middle Canyon Shooting Range, and the attic of one of Stan’s friends.

I asked Stan what it was like having George Takei working on his fan film. Did Stan feel intimidated? “Not at all. George was just one of the guys, and he was a lot of fun to work with. He made some friendly suggestions along the way for improving Sulu’s portrayal in the script, but he was never pushy about it. We had time to bond and become friends during the long drive to location.” 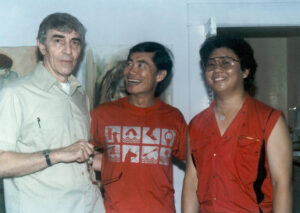 Filming proceeded at an almost manic pace, shooting scenes of Sulu beaming down with Yorktown‘s Captain Frame followed by a fire fight, a secret terrorist camp, a drone crash site, the lobby of Starbase 7, the interior and exterior of a cabin, and the bridge of the enemy vessel Nagaer. And then, with 1985 coming to an end and with only one significant scene left to shoot, all production completely stopped!

Next week in Part 2 – legendary Star Trek designer ANDREW PROBERT joins the production team with an interesting idea of what the U.S.S. Yorktown should look like. Actor JAMES SHIGETA agrees to be in the film, but what about GEORGE LAZENBY and FRANK SINATRA, JR.? Huh?