Fan Film Friday – The 35-year history of YORKTOWN: A Time to Heal (Part 2)

Last week in Part 1, we began looking back (waaaaaaay back!) to the 1980s and the birth of the long-awaited Star Trek fan film YORKTOWN: A TIME TO HEAL…with GEORGE TAKEI appearing as Sulu. We learned how, in 1985, 21-year-old showrunner STAN WOO was able to convince George to appear in a Trekkie fan film thanks to a decade or so of friendly stalking and a well-timed offer of a glass of bungundy.

Filming began in April of 1985 and continued in earnest through that November. During that time, ten different shoots in various outdoor and indoor locations were completed, including on July 14 at the Chilao Flats campground in the Angeles National Forest…just four miles away from Charlton Flats, where portions of Star Trek: First Contact would be filmed a decade later.

For those who weren’t around in the 1980s, there was no such thing yet as digital video. Movies were shot on film reels and/or recorded to video cassette tapes. Oh, and there was also New Coke. Yes, folks, the debut of one of the biggest beverage blunders in modern history was just four days before Yorktown‘s July 14 shoot, and Stan’s dad picked up a case of the new soft drink at a local supermarket. According to Stan, “George Takei may have had his first sip of New Coke on our set…” and supplied me with the photo at the top of this blog entry to prove it! 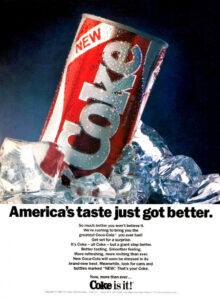 By the time November 1985 came along, filming had now been completed on nearly every major scene but one. The segment involved three different admirals in an office on Starbase 7—nothing too complicated, right? But it turned out that this one “simple” scene would delay the production more than half a year…

Stan felt that having George Takei appear in his film raised Yorktown to a certain level where other big-name actors might sign on as well and help to, in Stan’s words, “balance the cast.” No major celebrities besides George had played any roles in the scenes that had already been shot, but the Starbase 7 scenes offered the opportunity to bring in some notable Hollywood talent…or so Stan thought.

The idea that one of the admirals would be Nogura (the head of Starfleet mentioned by Kirk briefly in Star Trek: The Motion Picture) was pretty much a given in Stan’s mind. The question now was who should play him? Stan had been a big fan of the 1976 blockbuster film Midway, and he’d always imagined actor JAMES SHIGETA (who played Japanese Vice Admiral Chuichi Nagumo in that movie) as Admiral Nogura.

Unlike George Takei, Stan had no previous relationship or connection to James, so he simply contacted the Screen Actors Guild just as any other filmmaker might do and was provided with the contact information for RUTH BURCH, James’ personal manager. In January of 1986, Stan had a lunch meeting with Ruth, and she told him that she would present the script to her client. But Stan was savvy enough to know that he probably looked like an inexperienced kid with a silly little Trekkie film, and he didn’t want to simply drop off the script and then wait around forever for an inevitable “no.”

So instead, Stan did what all the successful Hollywood people do: he made himself “visible.” He’d drop by Ruth’s office every few weeks—“just in the area, thought I’d stick my head in and say ‘hello…’” (In truth, he’d actually driven 25 minutes from mid-city Los Angeles to West Hollywood just to “be in the area.”) A couple of months went by with no commitment one way or the other from James. Stan’s director, DA HAN, was getting impatient, telling Stan that this quest was a fool’s errand. But Stan wasn’t ready to give up just yet. 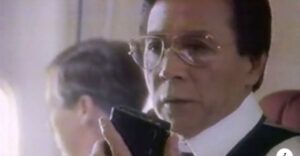 James Shigeta appears in a television commercial for United Airlines.

A break came in late March during one of Stan’s “drop by” visits to Ruth’s office. It turned out that James had recently shot a commercial for United Airlines, but the agency was dragging its feet in getting the actor a courtesy copy of the spot on video tape. Stan had a contact at the local KABC broadcast studio and was able to gain access to the commercial’s airing schedule. Stan recorded the ad that night and came back the next day with a video recording of the spot. “Just being helpful.”

It’s not known for certain whether Ruth felt that she “owed” Stan a favor or simply that the kid was trying so darn hard. But a month later, James Shigeta agreed to appear in Yorktown. That gave them the month of May to prepare, and on June 14, 1986, they filmed all of James’ scenes on Starbase 7 at the Olympic Shopping Center, Unit 206. 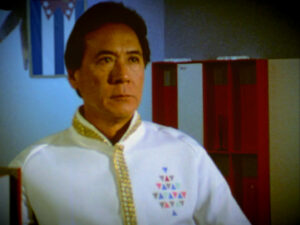 Of course, James was only one of the three admiral roles. What about the other two?

One of those admirals was almost actor GEORGE LAZENBY (the second James Bond after Sean Connery). Stan’s favorite Bond movie was On Her Majesty’s Secret Service, and he’d heard that George Lazenby lived in southern California. So in March of 1986, under pressure to cast the final big scene, Stan contacted SAG again, who gave him the number of Lazenby’s manager. Stan reached out, and the manager said that he’d pass Stan’s contact information along. “One morning, out of the blue,” says Stan, “I get a call from an American-accented chap who ID’d himself as George Lazenby. We talked a bit, and he expressed that he wanted a more juicy part or it wasn’t worth putting on his schedule. ‘I don’t want to throw lines.’ And that was that.” 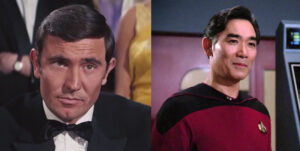 Another actor who turned Stan down was ROBERT ITO, who had co-starred with JACK KLUGMAN on the long-running NBC hit series Quincy, M.E. and also appeared in the 1984 cult classic film Buckaroo Banzai. (In 1988, Ito would also appear as a Starfleet Academy representative in the Star Trek: TNG episode “Comic of Age” and years later as Harry Kim’s father in the Voyager episode “Author, Author.”) Ito would have played an unnamed member of Nogura’s Senior Staff. Instead, the character was changed to Admiral Lori Ciana and the part ended up going to TERESA E. VICTOR, who was LEONARD NIMOY’s assistant and voiced the Enterprise computer’s countdown in Star Trek III: The Search for Spock. In subsequent years, Teresa would become an almost-godmother to Stan and his family.

Teresa had actually tried to get her friend, FRANK SINTRA, JR., to play the role of Captain Sean Mathews of the recovery cutter U.S.S. Independence, who sends a distress call that is received by the admirals during the Starbase 7 scene. Unfortunately, that scene was never properly written and didn’t get filmed before production stopped in 1987. But I’m getting a little ahead of myself. 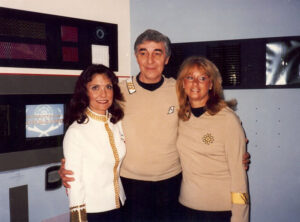 And a final bit of “blow your mind” trivia: the actress who plays Digby’s Assistant, Lt. Cmdr. Sherry Brockmeyer, in Yorktown, was none other than PATRICIA ANN COCHRAN (formerly Patricia Sikora). She’s somewhat (in)famous for being O.J. Simpson-lawyer JOHNNIE COCHRAN’s longtime lover. So, yeah…an interesting cast, to be sure!

As the quest for admiral actors was going on, Stan was also thinking ahead to what the Starbase 7 office would look like. With most of the film taking place in rugged outdoor locations, this was his chance to design a set that looked like something out of actual Star Trek. And to do that, why not reach out to a person who had designed for actual Star Trek? In this case, Stan decided on the legendary artist ANDREW PROBERT, who is credited with designing the refit U.S.S. Enterprise NCC-1701, the Work Bee, Drydock, the Orbital Office Complex, the Travel Pod, and the Vulcan long range shuttlecraft from Star Trek: The Motion Picture. Eight years later, Probert would design the Galaxy-class Enterprise-D for ST: TNG.

How did Stan find Andrew Probert? Simple: he let his fingers do the walking through the phone book and called him up! Andrew explained that he wasn’t a set designer, but another 411 inquiry quickly got Stan the phone number of Star Trek II production designer JOE JENNINGS—seriously, folks, it was that easy!–who agreed to advise Stan on transforming the small empty space at the Olympic Shopping Center into Starbase 7. 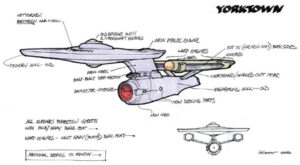 In the meantime, Andrew was also interested in working on the project, offering to come up with a unique design for the U.S.S. Yorktown. No reason not to say yes to that, right? Initially, Stan had figured the title starship would simply look like the original U.S.S. Enterprise pre-refit. But Andrew suggested that the Yorktown could be a hybrid of the pre and post-refit designs, testing the new warp engines and some other features. He sketched up a design of a TOS style primary and secondary hull but with TMP style warp coils on cylindrical nacelles that came low off the secondary hull, photon torpedo launchers at the base of the dorsal, and surface-mounted reaction control thrusters on the saucer. Andrew even had his friend PAUL NEWITT (author of the four-volume Starfleet Assembly Manual series) build a prototype physical model for shooting visual effects, although those sequences were never created. 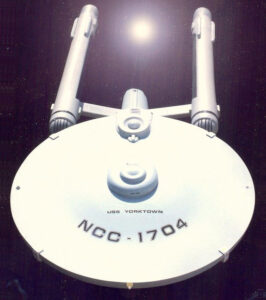 The physical prototype model of the refit U.S.S. Yorktown

Andrew also designed the Nagear (which is “Reagan” spelled backward), the vessel of the secret terrorist group S.H.A.R.K., along with a Klingon K-fighter. 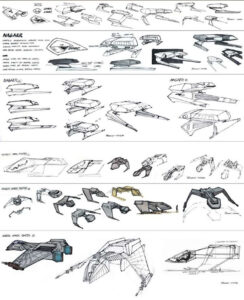 The final 1980s footage for the Yorktown project was filmed in March of 1987, and it was a simple shot of a framed photo hanging on a wall in a cabin. The cabin belonged to Jeffrey Pond—played by Stan and supposedly Sulu’s son—and the photo was of his departed fiancée. The photo had been taken in September 1986, framed, and put up on a generic tabletop.

All told, 3200 feet of Super 8 film was used—shot 50 feet at a time because that was the limit of each Super 8 Cartridge. That translated to only about two-and-a-half minutes of filming before having to change the cartridge…which was very annoying! On major Hollywood motion pictures at the time, 35mm and 70mm film worked differently, and directors had the luxury of keeping the camera rolling rather than having to constantly stop. In fact, Stan shared the following funny story: “After we filmed her scenes, Teresa Victor went back and complained to Leonard Nimoy about the frequent filming stops. ‘Leonard, you kept the camera running on Star Trek III, so why can’t Stan?’ Apparently, they were both scratching their heads as to why we couldn’t keep the camera rolling!” 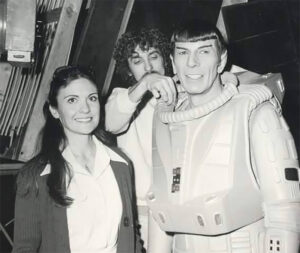 Teresa Victor with Leonard Nimoy in 1979

Later on when filming was complete, Stan and his team had to splice together eight 50-foot cartridge reels to assemble 400-foot reels…and then do that eight times total to produce eight 400-foot reels. That represented about 160 minutes of raw footage that could eventually be edited down to make their 15-minute fan film.

Unfortunately, production came to a complete halt just a few weeks later. And worse than that, all of the raw footage—every inch of film that had been shot—suddenly vanished in 1989…completely gone! Yorktown was dead, Jim.

Next time in Part 3 – Why did all production suddenly stop? And did things REALLY stop completely, or just “mostly” stop? How do eight film canisters of irreplaceable footage simply vanish??? And were they ever found again? We start the next blog in 1987 and then jump forward two decades to find out how a “dead” project suddenly came back to life!

And if you haven’t seen it yet, check out the latest trailer for Yorktown: A Time to Heal, coming this Christmas…