NEUTRAL ZONE STUDIOS in Kingsland, GA is the only place on the planet where fans can shoot TOS-era Star Trek fan films on a full range of TOS-era sets including the bridge, engineering, sickbay, briefing room, transporter room, auxiliary control, captain’s quarters, turbolift, and a full range of corridors. WARP 66 STUDIOS in Arkansas has some, but not all, of these sets for fans to film on. And while JAMES CAWLEY’s TOS sets in upstate New York feature all of the rooms listed above, his sets are now an official licensed tour and are no longer available for shooting fan films.

Originally, STARSHIP FARRAGUT and STAR TREK CONTINUES were shot on these sets in Kingsland. After STC wrapped in 2018, VIC MIGNOGNA sold the sets to RAY TESI, who then opened them up to any fan film or series that wished to use them—including DREADNOUGHT DOMINION, the AVALON UNIVERSE, CONSTAR, LET OLD WRINKLES COME, TO HAVE BOLDLY GONE, and a bunch of others.

But Ray Tesi and Neutral Zone Studios also have their own fanthology series called TALES FROM THE NEUTRAL ZONE. Their first episode, THE LOOKING GLASS, was released in June of 2019 and has had about 28K views on YouTube so far. Their second episode, ENDOSYMBIOSIS, was hit YouTube in February 2021 and is currently over 15K views.

Their third release, DOOMSDAY, premiered just last month on April 5 (“First Contact Day”) and is already up to a staggering 81K views!!! Why the immediate popularity? Well, it could have something to do with the telling of the long-speculated tale of how Commodore Matt Decker and the crew of the U.S.S. Constellation first encountered the Planet Killer device and wound up the way Kirk and the Enterprise crew found them at the beginning of the TOS episode “The Doomsday Machine.” Take a look…

No too shabby, huh?

One of the most intriguing aspects of this fan film isn’t simply what went on in front of the camera but also who was standing behind it. Fan filmmaker JOSHUA MCHAEL IRWIN (who is also a professional filmmaker) is based in Arkansas and typically shoots his Avalon Universe productions at WARP 66 Studios. He did film Avalon‘s first release, GHOST SHIP, at Neutral Zone, and he later shot their 2021 release COSMIC STREAM there, as well. And although Josh was the director of photography for INTERLUDE (filmed at ARES STUDIOS in Lawrenceville, GA), nobody in the fan film world ever associated Josh with Tales From the Neutral Zone.

Until now, that is.

Josh served as director, DP, and film editor for Doomsday while Ray served as executive producer. Apparently, that was a winning combination, as the film has proved extremely popular on YouTube.

So how did this pairing happen? And what went into the production of this new fan film? I decided to interview both Ray and Josh together…

JONATHAN – What led to Josh going from the Avalon Universe to directing an episode of Tales from the Neutral Zone?

RAY – I first met Josh when he filmed Ghost Ship here. We struck up a friendship at a time when I was still trying to find my place in the universe regarding the studio. But then something happened that kept Josh away from our location for a few years.

JOSH – Let’s just call it a “misunderstanding.” Ray and I have both moved past it, so I think it’s best we leave it in the rear view mirror. Long story short, we spent a few years filming exclusively on the WARP 66 sets in Arkansas. But in early 2021, I reached out to Ray, and he was very gracious. We reconnected as friends, and in late February of 2021, we filmed about half of Cosmic Stream down there. It was a really wonderful experience to go back and to meet all of the new people who were volunteering there and to shoot on those sets again. And as Ray and I continued to talk after that, he asked if I would help out with Doomsday.

RAY – We worked things out and began collaborating. I’d appreciated his work on the Avalon Universe and asked if he’d direct Doomsday, and he agreed. I think we cemented our relationship that weekend when we filmed, and there’s more to come. And whether it’s WARP 66 or TNZ or Timbuktu, it doesn’t matter. He’s doing what’s best for everyone. 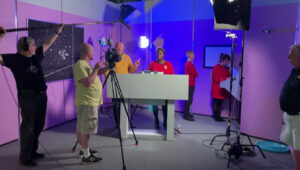 JONATHAN – When did you decide you wanted Josh to direct?

RAY – The episode was written by my longtime friend DON HORAN, and immediately I knew I wanted to film it and that I wanted Josh. The script was written in February 2021 and filmed in May 2021. I’m guessing I contacted Josh in March.

JONATHAN – So it sounds like you only had a couple of months to get things ready for filming.

RAY – Yes, pre-production was quick. It had to be because we can’t shoot at the studio during the summer months; it gets too hot and the building isn’t air conditioned. Josh and I both had the same vision, and it seemed pretty straightforward.

JONATHAN – So what tasks were required for pre-productoon.

RAY – Mainly it was just assembling the cast. I’d had a few actors approach the studio in the past and was able to get a cast together, and I was very happy with everyone who participated.

JONATHAN – Did you have auditions? How did you decide who would be playing whom…and was Josh involved in any of those selections?

RAY – I did a few auditions for Decker and Grayson. I knew LUIS SANCHEZ from a previous audition that was cancelled at the time due to COVID, and I knew I wanted him as Masada. The other folks are longtime studio volunteers that have worked on Dreadnought Dominion, so I knew their work. Then I assembled lots of extras. That was all me. Josh came on board after all that was done. 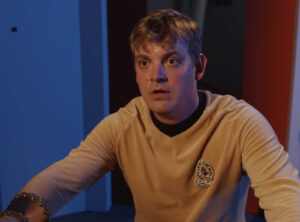 JONATHAN – Some people have questioned the casting of Commodore Matt Decker with an actor who has a noticeable southern accent, since WILLIAM WINDOM (who played Decker in TOS) didn’t sound like that.

RAY – I’m aware of those comments, and people are, of course, entitled to their opinions. The fact is that we don’t have a lot of actors who are available and able to take on such a challenging role convincingly. And based on his audition, I felt MATTHEW EZELL was the best choice for the role. So if you have a problem with Decker’s accent, blame me because the latinum stops here. Personally, I think he did a fine job.

JONATHAN – Did you, Don (the writer), and/or Josh do any prep work with the actors prior to the day of shooting?

RAY – I did table reads with the actors and gave some coaching. We did a few reads over Zoom about 4 weeks out, then 2 weeks out, I think (it was over a year ago), and Don was present for those. There was one final read at the studio on the day of, but Don wasn’t available to make that. Everyone was cooperative and accepted constructive advice.

JONATHAN – Did Josh give any advice to the actors during those table reads?

RAY – Josh wasn’t there for any of the table reads.

JONATHAN – Shouldn’t the director be there for table reads to help prep the actors?

JOSH – I didn’t do any prep work with the actors because, initially, I wasn’t supposed to direct.

JONATHAN – Oh? I think there’s a story here that needs to be told! 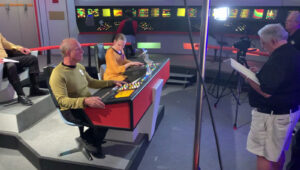 JOSH – Originally, Ray was going to direct the film himself, and I was coming down to help with photography because I just wanted to help them improve the look of their productions. I think we’re all trying to get better every time we go out and practice the craft, and I think Ray wanted that, as well, and felt like I could help them with that.

But when I got there, it became apparent that Ray was going to have other issues to worry about that weekend—administrating the studio type issues, trying to work some things out with the building owner—and he just wasn’t going to have as much time to devote specifically to the film like a director needs to. And so he asked me to take over.

RAY – Josh did us all a huge favor by agreeing to direct as well as do all the camera work.

JOSH – I was very honored that he would ask me to do that. I thought that was a great vote of confidence from him.

JONATHAN – So then you didn’t have any time to prepare as director?

JOSH – No. But doing things on the fly, I’m kinda good at that. So I did what I could. And it was challenging; I’m not gonna lie. We had a situation where it was 100 degrees in the studio—it was REALY hot—and it took longer to film than we thought. And a lot of the people were Neutral Zone volunteers and not really actors. They were just fans who wanted to be in a Star Trek movie…which is great; that’s the spirit of fan films. But it was challenging in that some people didn’t know their lines very well, and so I had to break down the script on the fly and go, “Okay, let’s change this line…” or “We’ll make this line easier to say.”

For example, there was a line about abandoning ship, and it was like, “All hands, abandon ship. Crew chiefs report to…” something or other. It was really long, and I knew it was going to be takes and takes and takes until we got it right. So I took out a red pen, crossed out about 90% of it, and told Matt Ezell to just say, “Abandon ship. All hands, abandon ship.” We also came up with little tricks like feeding people their lines off-camera and that sort of thing.

I’ve always said that 75% of filmmaking is logistics and time management. People see filmmaking as art when there’s a good majority of it that’s keeping it all from collapsing! There are people out there who say, “Oh, you need to be better prepared…” or this or that. But to me, it’s like Mike Tyson used to say, “Everyone has a plan until you get punched in the face.”

Things are gonna go wild on a film set. That’s just the way it is. And you’ve gotta be ready to just adapt to that. 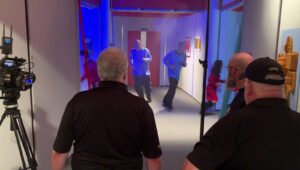 JONATHAN – So, Josh, what do you think you would have done differently if you’d known in advance that you were going to direct?

JONATHAN – What does that mean, precisely, to “break down the script”?

Next week in Part 2 – we conclude our interview with Josh and Ray, as we learn what Josh would have done differently if he’d had time to prepare as director. Then we move into post-production and discover how long it took Josh to edit this relatively short film…and why both Ray and Josh’s wife had to force him to stop and step away from the keyboard.