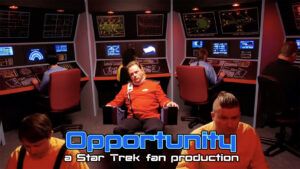 And then there were six…six fan films from the STARSHIP WEBSTER Creative Group that’s a part of POTEMKIN PICTURES, that is. And considering that this relatively new production team only launched 16 months ago, that’s going at a pretty decent clip…especially when one considers there was a pandemic lockdown for a decent potion of that time.

Webster got its start when show-runner RANDY LANDERS and his wife moved from Pelham, Alabama two states north to Lexington, Kentucky and reached out to local Trekkers and fans in the area to be a part of what turned into Potemkin‘s NINTH creative group (you can access all of the fans films from the various teams here). While other states in the vicinity like Tennessee, Ohio, Virginia, Georgia, Alabama, and Arkansas have supported fan films and series for many years, as far as I’ve been able to research, Webster was the first ongoing Star Trek fan production to be based in the state of Kentucky.

And the group has done some impressive work so far. Most recently, their latest release, “OPPORTUNITY,” has a run-time of 19 minutes and a cast of 18 actors with scenes on multiple homemade sets (in addition to a couple of composited green screen backgrounds). There are more than a dozen VFX shots.

While some fans criticized the “unpolished” nature of many of the Potemkin Pictures releases over the years, if you’re watching these fan films solely to be dazzled by top-tier production quality rivaling the major Hollywood studios, then you may have gotten off at the wrong exit. But if you go into viewing these productions with a mind open to seeing what fans with little money but lots of heart can manage to do, then you’re sure to come away satisfied.

And if you know what to look for, a fan film like “Opportunity” accomplishes quite a lot. Take a look…

This time out, I decided to have a free-form chat with four of the folks behind this film:

LAURA JOHNSON – one of the three writers of “Opportunity,” also a producer and actress who portrays Lieutenant Commander T’Varik, the Vulcan Science Officer of the U.S.S. Webster.

And of course, it’s not a proper Potemkin Pictures interview without show-runner and executive producer Randy Landers, who also directed this film.

JONATHAN – Randy, what would you say is the biggest challenge you face when tackling a new Star Trek fan film?

RANDY – I’ve been producing fan films for more than ten years, and COVID is the greatest challenge fan films have ever faced. Potemkin Pictures developed a working set of guidelines to deal with protecting our cast and crew from the virus. We socially distance. We ask the cast and crew to be vaccinated and/or produce proof of a recent negative COVID test. (Compliance is voluntary, of course, but recommended). Many of the cast wear masks. We have plenty of hand sanitizer available in the studio, and before and after each shoot, I disinfect the sets, props, and costumes with Lysol. Even the bottoms of the chairs get a thorough cleaning… 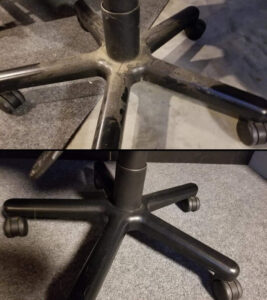 JONATHAN – Wow, that IS thorough! And not just the cleaning of the chair bases but actually documenting a before-and-after photographic comparison!! So does filming go fairly smoothly then?

BILY – As smoothly as things go with a pandemic and a cast of volunteers. It’s a passion project, so we all have other things on the burner, and that can make it difficult to carve out dedicated time within adult schedules across that large an ensemble. When the cast is together, and with fun guest stars like HILDA HELLACIOUS (Doyen Risme in “Opportunity” and the Gorn Father of the Bride in “LANDING PARTY”), it’s easy to get into the groove.

RANDY – We generally have no issues when filming, but our primary camera shorted out when we were testing hooking up a monitor to it. It took an extremely long time to repair due to a chip shortage, and we shot one STARSHIP DEIMOS production on a camera donated to us by LARRY FLEMING. The footage was good, but I made the decision to purchase an identical camera to the one that had shorted out. The new camera arrived in time to begin the shoot for our new STARSHIP CALIBORN production, and shortly thereafter, the repaired camera arrived from Panasonic (along with a hefty repair bill!). So now we have TWO very expensive cameras. As a result, we actually are running a fundraiser right now mostly just to cover the camera purchase and repair bill.

JONATHAN – Oh, I almost forgot to mention the fundraiser!

RANDY – Yes, we’re trying to raise $5,000 total for the cameras and other production costs. We accept donations through our PayPal account: producer@potemkinpictures.com

JONATHAN – I seem to recall tossing a few bucks into the hat back in January myself. How much have you raised so far?

JONATHAN – Getting back to “Opportunity,” that was a pretty big number of people appearing on screen in one film. How long did it take you to shoot all of the footage?

RANDY – It was definitely a large cast for one production—the largest we’ve had in years. We shot most of the footage in one day, and during editing, I discovered we needed additional shots, so there were more callbacks than usual.

JONATHAN – One thing I noticed in this episode were certain characters with a lot of lines to remember…and I mean a LOT! Many of those were delivered in single, uncut takes…and much of that was lengthy exposition, too, which is usually more difficult to memorize. Do you use any “tricks”—like hiding the scripts in the lower bridge consoles where the camera can’t see them but the actors can? 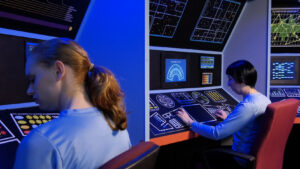 RANDY – “Opportunity” has so much exposition that the cast had to keep their scripts nearby.

LAURA – But no, there are no places to hide the script where it’s visible to read while we’re rolling.

JONATHAN – I only asked because, at one point, it seemed like the your character of T’Varik, the Vulcan Science Officer, had delivered as much of the monologue as you could remember, and then you”switched” to reading, but I couldn’t be certain.

RANDY – I did notice Laura’s script partially visible from where she was sitting on it, but she certainly couldn’t have been reading it there.

BILLY – She was sitting on it for the extra height.

LAURA – You gave away the movie magic, Randy!

RANDY – I didn’t give any secrets away. [Grin] I noticed it on a viewing after its release on the new big ol’ TV. Better than seeing Jeff’s [lead Potemkin actor JEFFRREY GREEN -Jonathan] ubiquitous Diet Coke in so many episodes of PROJECT: POTEMKIN…or the big yellow extension cords!

ROSS – If Game of Thrones can get away with a Starbucks coffee cup, you’re free to do whatever you want.

RANDY – Speaking of thrones, take a look at ours… 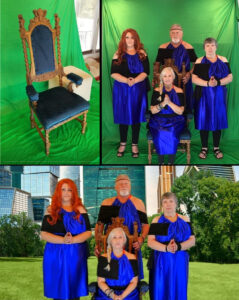 JONATHAN – You just sorta had a throne lying around the house, huh?

RANDY – Not me. I reached out to anyone who had an ornate chair or throne, and I cast TOM O’BRIEN (a local actor) and the chair.

JONATHAN – How wonderfully convenient! Fan film viewers often forget that everything we see on screen—costumes, sets, props, furniture—has to come from somewhere, and just finding and/or making all of that stuff with extremely limited budgets is often its own unique quest and challenge.

JONATHAN – On the subject of casting and cast members, do these folks in your films audition for certain roles, or do you just give certain roles to certain people knowing how much they can handle?

BILLY – We had an idea for some roles amongst the immediate creative team, so when people read, we could move them around certain positions to see which fit both the performer AND the chemistry. We also tend to see where people want to be on the ship and accommodate…because it’s all about fun.

JONATHAN – This is the way. Moving onto the VFX, since we have Ross here, I counted over a dozen outer space VFX shots (not including the opening credits sequence). That’s quite a large number for a Potemkin fan film. How did you go about tackling that challenge, and how closely does Randy, as director, supervise your efforts? 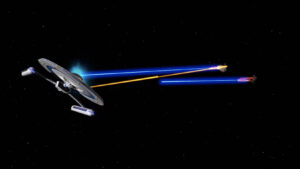 ROSS – Randy gives me a shot list of what he needs for a production. Sometimes he already has a rough cut in place so I can see what’s going on and try to tailor each animation to fit the narrative better. In this instance, he started off apologizing for how many shots he needed. Other than that, he’s pretty hands-off. He’s easy to please. There have been a few times I’ve sent him something I wasn’t totally happy with and wanted his input, and all he’d say was, “Perfect! We’ll use it.”

JONATHAN – Do you do CGI professionally at all or just for fun?

ROSS – I do animation as a hobby, so I don’t get to just sit down and kick a bunch of animations out overnight.

JONATHAN – So how long does it take to do a dozen animations?

ROSS – “Opportunity”’s first shot in Electric Image Animation System (EIAS) was created at the end of August, and the last project was created the day before Halloween. On several of the shots, I would create the project at home, then let my 10-core work computer do the render over the weekend.

“Opportunity” was shot at 50 fps, so my animations had to match that. At two to four minutes of render time per frame, that time added up by the point that I was done. “Opportunity” ended up with fourteen different project files. There were also six files in HitFilm where I added effects to the base animation. I was rendering out PNG sequences with each element in the animation as its own sequence so I could insert effects between layers and have the effects obscured by foreground images.

ROSS – There were quite a few shots in this one. It has been fun seeing a few people comment on it.

RANDY – You did do some of the most realistic VFX of space combat for this one.

ROSS – Aw, shucks. I was trying to just not have the same look to the fight that usually gets done.

RANDY – Believe me, we appreciate your hard work.

JONATHAN – We all do, Ross. Great job! And finally, what’s coming up for Starship Webster on short and long-range sensors?

RANDY -We’re shooting a one-room play with three Starfleet Officers, three Romulan Officers, and three Colonists on March 19th. It’s a cute story based on a true story. After that, I believe we’re shooting a shuttlecraft episode.

JONATHAN – As usual, much more to look forward to! Thanks for your time, everybody. Keep on Trekkin’.