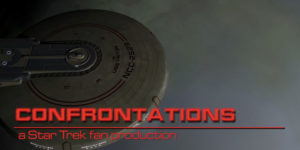 Lately, whenever POTEMKIN PICTURES releases a new fan film from one of their (currently) SIX different creative teams, I try to ask show-runner RANDY LANDERS a question or two about the latest episode.

With two different releases from Potemkin Pictures coming out on the exact same day (May 25), I tried to spread out the coverage a little by spotlighting one last month (STARSHIP DEIMOS “Children of Eberus“) and one this month. The joke’s on me, though, because Randy just released a third new fan film on June 22, but I’ll get to that one at some point soon!

Anyway, this blog focuses on the newest offering from the STARSHIP TRITON creative team: “Confrontations.” The series features as a main character Janice Rand (now a Commander, as this is movie-era, and also the first officer) along with, as of this latest episode, Dr. Christine Chapel. So far, Triton is the only Potemkin Pictures fan series to include canonical Star Trek characters as members of the crew.

“Confrontations” is this series’ third episode, having just re-cast the role of Rand with a new actress, PAM SHURETT, who gets some dramatic scenes with with the second officer, played by LEZLIE SAWYER (who seems to be popping up in fan films all over the place these days!). You can watch it here…

When I reached out to Randy to ask about this episode, I found myself wondering about something. Triton was the sixth different fan series to premiere from Potemkin Pictures. (You can see all the episodes from all seven series on their website.) PROJECT: POTEMKIN was their first series and wrapped up a couple years ago with three dozen episodes. That was followed by STARSHIP TRISTAN, STARSHIP DEIMOS, BATTLECRUISER KUPOK, and STARSHIP ENDEAVOUR…then TRITON and finally HOSPITAL SHIP MARIE CURIE.

So my question for Randy was: what happens to justify Potemkin Pictureslaunching a whole new series/creative team?  Why not just put some of these characters and actors (like Rand and Chapel) onto a starship in an existing series?

I also wondered what had happened to necessitate re-casting the role of Janice Rand? Previously, for the various Potemkin series, when an actor moved away or was no longer available, the character was written off the series. I suppose, however, when the character is a major one, like Rand, recasting makes more sense. But nevertheless, I was curious. 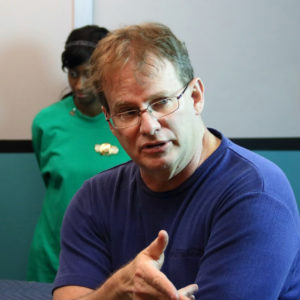 When we first moved here to Pelham, Alabama, we knew that we would be leaving the U.S.S. Potemkin (and the series, Project: Potemkin) behind. We finished up that series with a rousing conclusion entitled “Destinies.” We took that as an opportunity to introduce both the Tristan, the Deimos and even the Endeavour as ships in the same sector as the Potemkin…as well as paid tribute to Jerry Stanford’s Star Trek: Valkyrie audio series (whose actors had actually appeared in the Project: Potemkin episode “Closing Time.”

Once in Pelham, I decided I wanted to do two new productions: Starship Tristan (a giant UPS truck in space) and Starship Deimos (a police car/photon torpedo cruiser in space). Potential cast members came out of the woodworks. I immediately had more people wanting to be in our productions than I had roles for. I knew I wanted to bring back the Battlecruiser Kupok (first introduced in Project: Potemkin ), but I needed another vehicle (a bad pun, sorry) to get these folks who wanted to be involved. So I created the Starship Endeavour group with the premise being Star Trek with an Outer Limits feel. I knew I could do one production for each Kupok and Endeavour every year. And yet more people wanted in, some bringing their own ideas.

Thus, Hospital Ship Marie Curie was born. Zack Vice had been involved with a Battlecruiser Kupok production, “A Gathering Storm,” that featured the Federation starship Triton. Zack wanted to develop his own ship and his own show and had his own script. We took that as an opportunity, and created the Marie Curie, and brought Lillian A. Cole from the Triton landing party and made her the captain. We made some serious changes to the concept: Zack wanted the ship to be a SUPER ship, and I just balked at that. I think things are more interesting when there are limitations to capabilities, and thus I allowed him SUPER deflectors, and NO weapons. And so the challenge for the Marie Curie (an ambulance in space) is to tell stories, generally medical rescue in nature, without the use of any weapons.

I was planning on shooting one production per month—with the first four groups (Tristan, Deimos, Kupok, and Endeavour) taking 10 per year—so I gave the Marie Curie creative group one of the remaining two filming slots. Interestingly enough, the Marie Curie has also appeared in forthcoming productions from the Starship Deimos and Battlecruiser Kupok creative groups.

And yet more wanted to be involved. Shelton E. Walker, who was the captain of the Triton and who led the landing party in “A Gathering Storm,” wanted to be more involved. And thus we went ahead and created the Starship Triton creative group with Shelton as Commodore Eugene Alwine, and gave this group the final filming slot per year.

Others wanted to be more involved, as well. Liz Knauel, who had written for my fanzine publishing group ORION PRESS, wanted to write one of her favorite characters, Commander Janice Rand, and so we brought the character over to the Triton under mysterious circumstances. Liz immediately wrote four stories for us to develop into scripts, and we will be incorporating those elements into the Triton productions as it evolves. 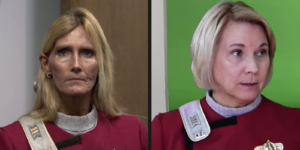 We brought in a model to play Janice Rand in our debut episode “New Orders.” She actually first appeared as an Orion slave girl in “The Crown Jewels of Xantharus,” which premiered second but was filmed before “New Orders.” Unfortunately, she lives in Mississippi, and I felt we needed to go with someone closer. Another local actress expressed interest in joining us, and I jumped at the chance of having her assume the role of Janice Rand.

I’m glad to some of our series are more popular than others, and I’m glad that the number of fan films released isn’t affecting the popularity, but adding a new series is just a matter of logistics. There are so many local actors and fans who want to be a part of our productions, and we want to accommodate as many of them as we can. Plus Jack Zumwalt still lives in Albany, Georgia (that’s a 240 mile commute for an eight-hour shoot), so I really don’t feel right asking Jack to drive that far more than a couple of times each year. And with so many actors wanting to be involved, it’s really unnecessary.

So now with one production filming per month, twelve per year, that’s how things currently stand.