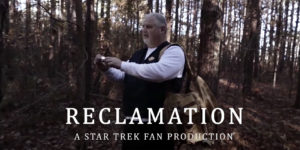 When most fans think of POTEMKIN PICTURES (at least the fans who know about Potemkin Pictures), the person who usually comes to mind is show-runner RANDY LANDERS. And that makes perfect sense. Randy has kept Potemkin going for a decade across three different U.S. states with eight different creative teams producing an average of about 10-12 fan films a year. If you want, you can view SEVEN DOZEN different fan films on the Potemkin Pictures website.

But Randy doesn’t do it all by himself. In fact, he’ll be the first to give credit where it’s due. And so when I asked him to provide a few quick quotes about the newest 2-part release from the STARSHIP TRISTAN Creative Group, Randy told me that the person I really needed to talk to was GREG OGLES.

One of the best things about Potemkin Pictures is that they are about as inclusive as can be when it comes to opening their doors to fans to come play in the sandbox. And this isn’t simply for folks wanting to show up, put on a shirt, and say a few lines in front of the camera. Randy offers ample opportunities for folks to work on Potemkin projects at all levels—from acting to writing to directing to producing. And in fact, Greg Ogles has just had a chance to do all of the above at the same time!

The two-part “Reclamation” has a total run-time of 35 minutes (pretty close the the 30-minute time limit set by the fan film guidelines). It’s the second two-parter that the Tristan Creative Group has released, being the 17th and 18th overall episodes of the (don’t call it a “series!”) fan undertaking. Before we get to the interview, take a look at what Greg and I will be talking about…

And now, a little chat with Greg Ogles…

JONATHAN – Welcome, Greg. Let’s start off with a little about who you are, who your family is, where you live, and what you do when you’re not making fan films.

GREG – Thanks for having me. I’m from central Alabama, just north of Birmingham, where I make my living as a traffic analyst for the City of Birmingham.  I have been doing that for nearly 20 years, and before too long, it will time to do something else.  I am married, and together we have three boys in our home…or soon-to-be home.  Over the past year, my wife and I have been busy designing and getting a new home built.  So in addition to work, home life, and building a home, I have found a little extra time in there for my hobbies. 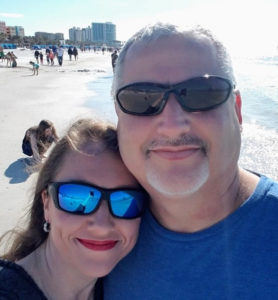 JONATHAN – When and how did you first get involved with Star Trek fan films?

GREG – I first became involved in fan films several years ago when I met Randy at a convention.  He had a booth that was devoted to Star Trek fan films, more specifically Potemkin Pictures.  I have always loved Star Trek, so I took that opportunity to live part of a childhood fantasy.

JONATHAN – Did you have any experience with filmmaking before you met Randy?

GREG – I had already been working on a documentary with another group, but I had not experienced film from a scripted point of view.  So filming with Randy was a learning experience for me.  After I had shot a few scenes with Potemkin, Relic Films, with whom I am associated, released our documentary The Legend of the Downey Booger.  This is a film about a local legend in Alabama that dates back to the late 1800’s.  Our team set out to investigate the legend and determine what the legend was actually referring to and if the legend had any truth to it. 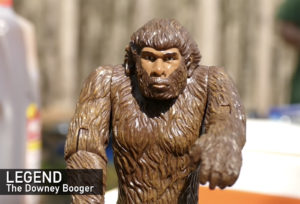 JONATHAN – So what did you learn from doing your documentary that you were able to bring to Potemkin when you started working with Randy?

GREG – In doing the Downey film, we learned how not to make a film.  We did things the hard way, and in doing so, it took us several years to actually make the film.

I essentially played the producer role along with being a cast member.  I myself had never had any type of training, schooling, or education in film whatsoever, so I was just winging it.  Fortunately, I did recruit another team member, Brent, who was instrumental in editing and flow of the film.

I recognized that if I wanted to continue making films that I needed to be able to communicate intelligently with people who could do specific tasks.  If I wanted a certain visual effect I needed to be able to at least partially do it or show how I wanted it done.  Downey did not have a script at all, and it seemed like we never had an ending in sight.  That led to so many delays that I lost track of them all.  So I needed to learn how to write a script.  I had never edited before “Reclamation,” so that was also a learning curve.  I needed and wanted to know all aspects about film so I could continue to grow and improve.

JONATHAN – How exactly did “Reclamation” come to be? And how long did it take from conception to release?

GREG – The idea of “Reclamation” first came to me in late 2017, I think.  That is where the script began.  Then in late 2018, I submitted the script to Randy where it was put on a shooting schedule after some wrangling about the script.  It was shot in the spring of 2019 on set, and all through 2018 and 2019, I was on site filming and editing.  So from conception to fruition, it took two years to get the film out.  Now, if I had more experience in writing, filming, editing, VFX, etc., it would not have taken but about a year.

JONATHAN – What did you do to prepare for directing and producing “Reclamation”?

GREG – Preparation first starts with an idea.  I had an idea that I came across while talking with people in the Downey film.  I learned a lot about my own family and the struggle many of my ancestors must have had during the 1800’s.  I learned that I have a great grandmother that is on the Dawes Rolls.  I learned that I had ancestors that escaped from the Trail of Tears and had to claim their race as “black dutch” to keep from being rounded up and sent to Oklahoma.  I learned of the continued struggle that many American Indians have today.

So I took what I knew about and wrote about that.  I didn’t stop writing until I had a full script done.  I did consult with DAVID CARROLL amd BRENT McGOUGH regarding the script in its early days, and it did go through some massive changes.  But the core idea of the script remained the same.

Once I felt it was ready, I submitted the script to Randy for approval.  Once the script was approved (with some modest changes for the better), we all sat down and discussed a filming schedule.  Randy did handle all of the bridge shots as far as scheduling, casting, etc.  However, I was behind the camera and either directing or co-directing. 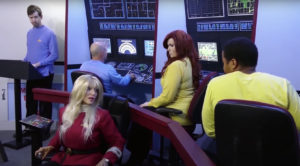 JONATHAN – So transitioning from pre-production to production, tell us a little bit about your first experience directing.

GREG – Once behind the camera, I was more comfortable using my own equipment.  Obviously, the set was Randy’s, but the camera was mine.  It was the same one we used for Downey, and I knew if something bad happened to the camera, it was mine and already paid for.

Randy was instrumental in making sure the filming dates on set remained hard and that everything ran as smoothly as possible.  However, off-set it became a bit more tricky.  My wife and I had only ourselves to film us, and we had to be creative in how it was done.  We went through several setbacks as we would shoot and something would happen and I would lose the material.  In one instance an SD card was bumped as someone walked by the computer, and as it went through premature ejection, all of my footage was lost.  Another SD card bit the dust between some rocks at a cliff we were on, and all of that footage was lost.  And an unfortunate update left me with only half of some of my footage.

So there were many re-shoots for what should have only taken two days at most.  But then again, I was still learning, and the growing pains is what I expected.

JONATHAN – Oy, with the technology! How about the people? What was it like being a first-time director setting up the shots and dealing with the actors?

Cone back next time for the conclusion of our interview with Greg as we discuss post-production, what scenes Greg wanted to include but couldn’t, and the unexpected health scare that happened while Greg was working on the project.