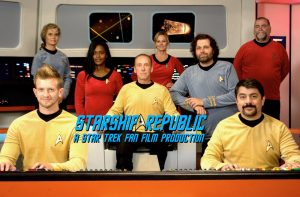 Last week, we chatted with Ray Tesi about one of the newest fan projects, Starship Republic.  Filmed at Starbase Studios before it recently moved from Oklahoma City to Arkansas, the fan production just released a short vignette and launched an Indiegogo campaign with a $16,000 goal.

One of the most intriguing things about Starship Republic is the fact that show-runner Ray Tesi actually reached out to John Van Citters of CBS Licensing to review their crowd-funding campaign and give feedback on whether or not there was any problem with them distributing unlicensed perks…both physical and digital.  And so far, CBS sees no issues with Republic doing just that.

We also learned a little about what will make Starship Republic unique…specifically aiming for a look and feel that reflects more modern cinematic techniques rather than trying to faithfully recreate the style of the 1960’s era original series episodes.

And now it’s time to conclude our interview with Ray as we learn more about how the production came to be, how they found their cast, what it was like to actually produce the project, and what’s in store for the future…

JONATHAN – Okay, let’s switch gears to the “origin story.” Who are you and what made you decide to produce your own fan film? 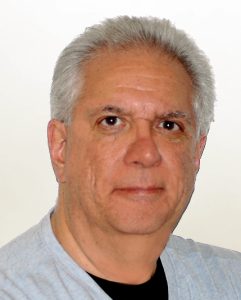 RAY – I am a regular guy who was sitting in front of his TV in September 1966 and fell in love with an idea…an idea that would permeate and change my life forever. No kidding! I’ve wanted to make films since I first held my grandfather’s wind-up 8mm Kodak camera as a kid. My real life is a million miles away from film making, but when the opportunity arose, I jumped at it!

JONATHAN – So what is your real life?  What do you do when you’re not making fan films?

RAY – I’m an IT person by trade, put I’ve learned a lot of different business skills over the last 30-odd years. My wife and I have been married for 37 years, and the last 24 years or so have been dedicated to raising our two children. Both are in college and on the cusp of graduating. We’ve always encouraged them to pursue something that would make them happy to do for the rest of their lives, and we’re thankful that they are. 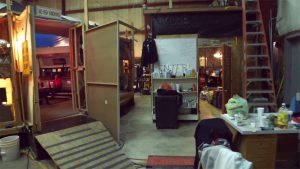 The “other” side of the bridge at Starbase Studios in Oklahoma City, OK

RAY – I stumbled on a post on Facebook that there was going to be an open “convention” of sorts called Promende-acon hosted in Oklahoma City at a place called Starbase Studios. I looked them up and saw that they were housing several TOS era sets. First off, I had to see this! I’d given up the regular convention scene years ago, and where else would I get an opportunity like this? I planned a trip to OKC with my life-long friend Don Horan, and Starship Republic was born.

JONATHAN – How long did it take you to go from idea to completed vignette? What were the steps?

RAY – Interestingly, I continually discuss TV and films with my buddy Don Horan. And we have co-written many, many stories over the years. Back in the 1980’s, we wrote a treatment for a series we called “The Sea Hawks,” loosely based on the Errol Flynn movie. We took the crew of the Enterprise and put them on a 16th century frigate. It was a snap to take those characters off the frigate and put them back on a starship! We conceived the basic treatment to pitch to Starbase Studios in September 2015 and filmed our vignette in October 2016.

JONATHAN – How did you find your actors? And are they trained actors or just Star Trek fans who volunteered? 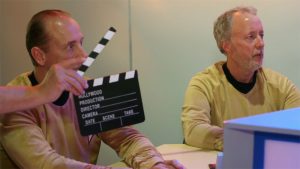 RAY – Our cast and crew came about through a few different channels. When I met with the folks at Starbase Studios, a fellow by the name of Vance Major know a number of actors that had performed in other fan films. Vance is a producer/actor himself in several fan films in and out of Star Trek. I also held an online open audition to not only see if I could get some good people, but to also give the opportunity to other fans who were as passionate as I was to play Star Trek. The gentleman who plays our captain, Jim Von Dolteren, led me to Gabriel Morgan and Samuel Cockings, and we never looked back.

JONATHAN – Were they all local to the Oklahoma City area? I know that you live in Florida.

RAY – No, actually we come from all over the mid-west and east coast. I flew in to OKC ahead of the group. Many drove many hours to get there, others flew in to OKC themselves to be a part of this “event,” all on their own dime. I’d say about 60% were local and the rest traveled long distances like myself.

JONATHAN – Did everybody show up when they were supposed to?

RAY – And therein lies the story. The short answer is “no.” We were going to have rehearsal on set on a Saturday afternoon and film Saturday evening and all day Sunday. Between the Thursday before shooting and right up to Saturday afternoon, I lost 4 out of my principle 8 actors for various reasons. Unfortunately, the actress who was to play our alien science officer had a family emergency that needed to be attended to. She was local to OKC and really wanted to be with us, but as circumstances unfolded, I thought it best she remain with her family. What we were doing paled in comparison. And unfortunately, that weekend she needed to be with her family

So I was coming into this down half my cast! I thought I was sitting on a bomb, but I couldn’t cancel because I had the rest of the cast and crew already on their way. Out of nowhere (and I MEAN out of nowhere), a young woman by the name of Da’Neille Roy, local to OKC, contacted me to see if she could audition for the part of our communications officer. She was like manna from heaven! What tree did she fall out of? No audition necessary. I cast her as our comm officer. When our alien actress couldn’t make it, I asked Da’Neille if she would take on the larger role of our science officer instead. She accepted without any idea of what she was getting into…only a few hours before the shoot. When she heard what was going on with the rest of the cast, she rallied and got a friend of hers to come in and play the comm officer as well as someone to play our navigator.  And Michael L. King, who produces Starship Valiant, made some phone calls and found us a yeoman. You can’t make this stuff up!

With scripts out, the cast rehearses in “civvies” on the actual bridge.

JONATHAN – Wow!  I didn’t realize I was asking such a loaded question!!  So were there any other unexpected surprises when you were filming?

RAY – Ha! Yes! But they were all good! First and foremost, I tried to bring a sense of teamwork and fun to the set, something I try to do in my everyday life. Immediately we all formed a bond…a real sense of camaraderie! We all felt it and brought it to the film. We all think it shows in our vignette.

JONATHAN – So you managed to shoot all of your scenes in less than a day and a half?

RAY – This was my very first experience in film making, and I was green, so I thought filming a 6-page script was going to take no time. Boy, was I wrong! Gabriel and I shared the vision I had for Republic, but he was the person actually doing it. He meticulously set up multiple shots of the same scene one camera at a time from different angles, zooms, depth of field–you name it, he did it! And that professionalism and dedication, in my opinion, is one of the things that makes Republic special!

JONATHAN – What was it like directing and executive producing your own fan film?

RAY – Well, like I said, I was green. But I consider myself a fast learner. I learned a ton standing between two people: Gabriel, who almost immediately became my co-director as well as cinematographer, and Kent Edwards (aka “Words”), who signed on as Assistant Director. Let me tell you my first experience and you’ll see…

We had set up scene one in the transporter room. Gabe was on my left at the camera, Words was on my right (and I had no idea what his role was), and I was at the monitor. The scene was ready, and I yelled “action” like any good director. The scene went off and was “okay” at best. Words walked up to me and said, “Hey, would you like me to be…” and to this day, I have no idea what he said. But me being the consummate professional, I said, “Absolutely.”

Well, Words took over audio, which allowed Gabe to concentrate on video. Then Words took a lanyard out of his pocket, pressed a red button ringing a loud bell throughout the studio, and yelled, “Quiet on the set!” Then Gabe said, “Camera ready,” followed by Words saying, “Audio ready.” And then there was dead silence. Gabe and Words looked at me, and I tentatively said, “Action…?” and the scene went off without a hitch! I had arrived!!

JONATHAN – How many people in total were involved in this project? Are there any other key members of the production team you’d like to highlight?

JONATHAN – So you’ll be filming the rest of your project at the new Arkansas location of Starbase Studios?

RAY – Yes, that’s correct. The sets have been transported from OKC (so to speak), and they are hip-deep in reassembling them now.

JONATHAN – When do you expect filming to happen?

JONATHAN – And will you be filming the entire remainder of the two 15-miniute parts of the story all at one time?

JONATHAN – What happens if you don’t reach your Indiegogo goal? 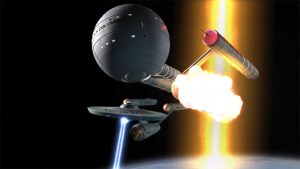 RAY – I would hate to only film one 15-minute segment. We’re prepared to do it all. I have self-funded the vignette, so if we don’t reach our goal…well, time will tell. I know that fans may be wary to contribute to projects like this given the current climate, so we’re testing the waters. I hope our fan base will grow and they will rally around us. Can’t ask for more than that!

JONATHAN – And finally, now that you’ve joined the “I made a Star Trek fan film” club, do you have any advice or words of wisdom for other aspiring fan film makers?

RAY – To quote Nike, “Just do it!” The facilities and the resources are out there! And yes, there is the question of funding. But if you have the dream, pursue it! Get it done! And have fun doing it!

And remember you can DONATE by clicking here and you can keep up with the latest Starship Republic news on their Facebook page.

And here’s the 9-minute vignette for their debut episode “Serpent of Yesterday”: