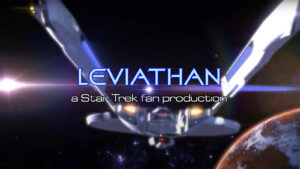 The STARSHIP DEIMOS has been flying around the fan film sector for more than five and a half years now…ever since their first release on March 9, 2016. It came on the heels of the new fan series STARSHIP TRISTAN, which had debuted just four months earlier. Both productions sprang from the venerable POTEMKIN PICTURES, which had already, by that time, released thirty episodes of their debut fan series, PROJECT: POTEMKIN.

Since that time, Potemkin Pictures has spawned an additional SIX series of Star Trek fan production teams with nearly two dozen episodes of their own. (You can access all of the nearly-100 Potemkin fan films from their website.) But by far, the most prolific productions came come from the teams making Tristan and Deimos. Tristan released their most recent fan film (their 21st overall) this past March, but Deimos had been running silent for nearly a year…since last Halloween, in fact.

That changed on September 24, 2021 with the release of Deimos‘s 17th fan production, LEVIATHAN. It’s a good ol’ fashioned ship-in-peril-from-a-spatial-anomaly story, and it’s very well-acted. It was filmed on the new Potemkin Pictures sets in Lexington, KY. Check it out…

JONATHAN – When did you folks film Leviathan?

RANDY – May 22nd, from 9:00am until around 5:00pm. It was a typical one-day shoot except that we had three live remotes going on during the shoot. Most of the out-of-state cast came up Friday from Birmingham, AL and Tampa, FL. The nearby cast came from Kentucky and Indiana. We provided lunch, as usual. And we shot not only Leviathan but also a very short film for Deimos, as well.

Once we wrapped, some folks headed back home. The others drove back Sunday.

JONATHAN – The performances in this episode were particularly strong. Did this cast have more experienced actors than usual?

RANDY – The Deimos cast has been at this since 2015. VICTORIA AVALON, TUCK STEVENS, TOM HAGALE, LEE DREW, and TIM and RENDA CARRR were last together in 2019’s The Butterfly Effect and Blood Crystals. I think that leads to a certain continuity with the cast and crew.

And it doesn’t hurt that Tuck, Tom, and Lee are experienced actors on both stage and film in Birmingham and that Victoria has been involved with fan films since the days of STARSHIP FARRAGUT.

Experience is always a plus.

JONATHAN – This has been the first new release from Potemkin Pictures in six months…which is a pretty long gap for you guys. What caused the “delay”?

RANDY – We lost a key VFX and music contributor, and that hurt a lot. Fortunately, DAN REYNOLDS (of WARP 66 STUDIOS / Wolfe/Reynolds Productions) stepped forward to help with the VFX for this production, and TONY LUNN came out of “retirement” to provide a wonderful score.

We also had MARK BERGE return to do VFX work, and he’s currently working on one of our other films, as well.

These guys are a blessing to have.

JONATHAN – Which other Potemkin creative groups have episodes “in the can” that are currently being edited?

All three Webster productions are in VFX post, and I’m actually working on them all, since it’s more of a digital extension sort of thing rather than space-based VFX. The space VFX are being done by the most excellent ROSS TROWBRIDGE, who continues to amaze all of us with his work.

The Deimos film in post is receiving VFX from Dan Reynolds, and I’m still working on the edit.

The Potemkin film got a few pickup shots last weekend, and Mark Berge is working on the VFX for the film.

I had hoped to release all three Websters by now, but I would guess a release before the end of the year is reasonable. The Deimos film is slated for a December release. The Potemkin film will be ready in 2022, I think.

So we’re a little behind with the digital work, and we’re working on getting it up to speed.

JONATHAN – How often are new episodes being shot right now? Are you still going to maintain your previous average of 10 or more releases per year?

RANDY – Taking into account COVID, I think we’ve done a remarkable job of producing films while observing and enacting safety protocols. Even then, however, outbreaks here and there have stunted local production of the Webster films.

I suspect we’ll have four more releases this year (seven in all for 2021), and that’s fine. We’ve got plenty of stuff in the works. We’re hoping everyone looks forward to the things we’ve got coming out, including the Project: Potemkin feature.

JONATHAN – Speaking of Webster, I saw you mention recently that there was yet a SECOND group locally in Kentucky that wanted to start up a new creative group?

RANDY – Yes, we actually have another two groups in development, one totally local, the other having a mixture of Atlanta, Nashville and local actors.

JONATHAN – Well, I guess there’s still a lot more ships in the Fleet!

RANDY – Absolutely. We had the same thing happen in Birmingham. We started with Tristan, then more people showed up, so we added Deimos, and more people showed up, and we kept adding ships. Sadly, a lot of the cast and crew of those later groups have been unable to make the trip here to continue their involvement. It looks like only Deimos and Tristan will be left from Birmingham.

Depending on how things work out, Potemkin may become an annual production. It’s looking like Webster is going to have a quarterly production schedule with Deimos being semiannual. And these two new groups will pick up the slack we experienced this summer.

Plus, you can expect a “special film” from the folks in Birmingham here and there. In fact, three of the Birmingham actors—KIMBERLY WHITE of Tristan, TERRELL MANASCO of ENDEAVOUR, and SHELTON WALKER of TRITON—were filmed for a key scene in the upcoming Project: Potemkin film.

JONATHAN – Well, I’m glad to see that Potemkin Pictures is continuing to live long and prosper. Get back to work finishing those fan films, Randy!