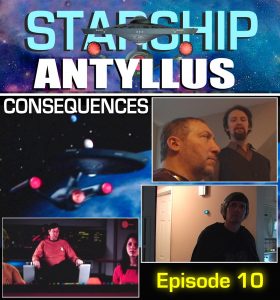 When CBS and Paramount announced the new fan film guidelines in June of 2016, the first guideline was among the most controversial:

The fan production must be less than 15 minutes for a single self-contained story, or no more than 2 segments, episodes or parts, not to exceed 30 minutes total, with no additional seasons, episodes, parts, sequels or remakes.

Since then, nearly a hundred Star Trek fan films have been released (possibly more, I haven’t counted them all!), and most have followed those guidelines as best they can. A few have gone slightly over the time limit or tried to get around the “no series” rule by changing the series title with each new “episode” of a fan series despite featuring the same cast and characters.

Of course, Star Trek Continues has been the most notable for not hewing to the guidelines in each of their final four episode releases…all produced after the announcement of the guidelines (the last episode coming next Monday…you’ll LOVE it!). But STC is shutting down production.

Another fan series, however, is NOT planning to shut down, and they’ve just released the 55-minute long tenth episode of their first season. That series is STARSHIP ANTYLLUS, which began back in 2013. They released their ninth episode just over a year ago, months after the guidelines were announced.

Show-runner GEORGE KAYAIAN has actually been making Star Trek fan films since way back in the 1990s when he produced three full-length amateur features ranging from one to one-and-a-half hours in length. These low-budget productions starred his mother as the captain and his father as chief engineer. (Yeah, my parents would never have agreed to that! Then again, they can’t really act.)

Two decades later, Starship Antyllus still features George’s friends and family members, but now George is a parent himself with one of the most adorable daughters you’ve even seen. Anya has actually appeared in a 2-part episode, and she helps behind the scenes, as well.

Episode 10, “Consequences,” completes season one of the long-running fan series, and George is already working on the first few of episodes of season two, with the whole season-long story arc mapped out. Many scenes have already been filmed, with more being added soon. Obviously, this is going to be an ongoing fan series, something the guidelines say is a no-no.

So what does George have to say about this situation?

Star Trek Continues pointed out that the guidelines only say that if a fan production follows them all, it won’t be sued (or bothered in any legal way) by the studios. The guidelines do NOT say that if a fan production doesn’t follow them all that it will be sued. That decision is made solely at the discretion of the studios and on a case-by-case basis. 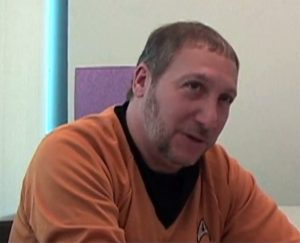 “The Guidelines are just that…guidelines.” says George. “I’ve been working on this series since 2013, and I truly love all things Trek. I have a very small, devoted following, and I don’t think I attract enough followers to be of any interest to CBS or Paramount. Having said that, I have tried in all other ways to follow the guidelines, and it’s all done with family and friends.”

Also like Star Trek Continues, George isn’t looking to thumb his nose at the studios. “If I were told to cease and desist,” George continues, “I would just make my videos private and finish my Trek, so to speak. I do respect the powers that be, and support all the professional Trek. I’m just a grass roots filmmaker who loves Trek and doesn’t make waves.”

George also points out that, with the exception of the time limit and no ongoing series guidelines, he is following ALL of the others. “I buy all the props, and use only official merchandise, and my budget is about twenty dollars an episode! I don’t sell anything regarding my series using the Star Trek name. My videos are on Youtube and free for all. So I don’t make a cent doing this (much to my wife’s displeasure!). Even my ship and crew are all my creations, so hopefully I’ll be okay. I only want to entertain, not hurt anybody.”

Although ultra-low budget (George wasn’t kidding about spending $20 per episode!), Starship Antyllus is made with a generous helping of dedication and heart. It is the quintessential fan film: a fan who loves Star Trek, humbly and quietly enjoying his time in the sandbox and sharing his toys with anyone who comes along and wants to play, too. With luck, the owners of the sandbox will appreciate Starship Antyllus for the respect and support it shows to the franchise.

Episode 10, “Consequences,” was written, directed, and stars George Kayaian. It also features a special guest appearance by Kenneth Thomson, Jr. as Captain Ray Martin from the Starship Saladin fan series. Also helping with the VFX was Lee Gartrell of the fan series Star Trek: The Romulan Wars. I love it when fan film folks come together on a project!

Both parts one and two can be viewed below…