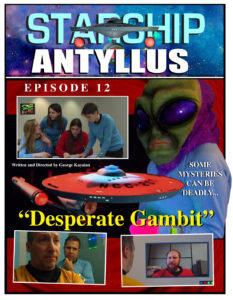 I love it when fan filmmakers come together.

GEORGE KAYAIAN has been creating Star Trek fan films since George Bush was president…the first George Bush, that is! ANYA SHEILA KAYAIN is only nine years old and wasn’t even around for the second President Bush. VANCE MAJOR has been appearing as fan favorite character Erick Minard since 2014 when he first donned the engineer’s tunic in Starship Valiant.

And now these three people all have something in common: they’ve each appeared in the latest, twelfth episode of STARSHIP ANTYLLUS: “Desperate Gambit.” For George, his character of Captain Holt Allen has commanded the USS Antyllus since this fan series first debuted in 2013. And daughter Anya has appeared in a couple of episodes before this one—most recently the 11th episode: “247”—and helped out on a bunch of others. (You can check out her very full IMDB page here.) She also provided this little behind-the-scenes “tour” of the Antyllus set last year in this video…

But now Anya is joining the Antyllus bridge crew as a brand new alien character named Sharb. How they solved the challenge of how to show a child as a bridge officer is one of the reasons I consider this ultra-low budget fan series to be so masterful: they do so much with seemingly so little. I asked Anya what she thinks about this new character, and she said: “I think Sharb is very intelligent, which shows off a part of me… it was a joy to play him!”

As you can see, Vance Major has a decent sized cameo as Minard. George appeared briefly in one of the three dozen or so Minard saga fan films that Vance produced, and George will be appearing in a couple of episodes of Vance’s upcoming Constar Chronicles films. The two fan filmmakers have become good friends, and recently, Vance had this to say about George…

Let me tell you about George Beau Kayaian. First off, he’s one of the most genius fan film makers I think that’s out there. He really puts himself into everything he does. With virtually nothing, he shows that you can put on a character-driven production that really captivates you, something that will keep you engaged if character is what you are looking for.

As someone who doesn’t care about all the flare of the most technological CGI gloss out there, I really appreciate what he puts into his productions, because you can see the love. So I tip my hat to you and what you do for people like me. Thank you, George. Keep on geekin’ on, and keep doing what makes you you.

Like George, Vance is also a dad who has featured his adorable child in fan films…although Vance’s son Royce is only two and a half.

JONATHAN – After nearly a dozen episodes, you introduce a brand new character for your daughter to play. How did that decision come about?

GEORGE – From a production standpoint, introducing Mr. Sharb is the right move. The character will be a regular from now on, and a real chance to get in-depth with. The reality is that it’s growing more difficult to film with a majority of my cast mates these days, so Sharb will fill in the void. Plus, let’s be honest here: I’m filming with my kid—a joy that cannot be matched for me—and we’ve already had so many great memories because of it!

JONATHAN – That’s awesome. My son Jayden has been begging to be in my fan film, but I just don’t have a part for him. But maybe someday!

So how about Vance Major? What made you decide to include Erick Minard in this episode?

GEORGE – Vance is a good friend of mine, and I’m a huge fan of his series. It just made sense to have him be a part of my show. Minard is such a great character, and Vance really knocked it out of the park for me. He will be back for another episode, at least.

JONATHAN – Vance continues to be the “Where’s Waldo of fan films”! Tell us a little about your latest release.

GEORGE – This episode is a direct sequel in some ways to our episode 11—and in many ways, that was my most ambitious one yet. With a story within a story (murder mystery angle as metaphor for the greater story I am telling), it was a challenge to say the least. It left with a question—and in Episode 12, we answer that and investigate more.

I should also give a shout out to my special FX guy, KENNETH THOMSON. He does amazing work free of charge, and I consider him a great friend. Without him, I wouldn’t be able to tell my stories properly! And my cast deserves credit—everyone puts in 100% for me, and they bring the characters to life. I’m really humbled and amazed by the love and support I get. What a gift to know all these wonderful folks, and to create a little Trekmagic for just the love of the show that continues to this day! 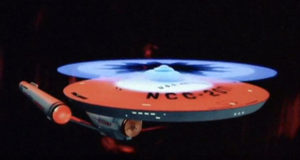 JONATHAN – Speaking of continuing, you are now two episodes into what you call your “second season” of Starship Antyllus. How many more seasons are you planning to produce?

GEORGE – My show will come to an end at the conclusion of season 2. I have mapped out and filmed the majority of the remaining episodes, which may be 8 or 10 more, depending on my need to tell the whole tale. If all goes well, all will be revealed in the end.

And then this chapter in my life will be closed. Of course, if I think of anything earth-shattering, that may change…it’s happened before! So in the end, the entire series will be one large story, which is something I’ve always wanted to do.

JONATHAN – Why not have a season 3 and beyond?

GEORGE – The time is right, as my cast have lives to live, and I have many ideas that are non-Trek to explore. But I’m enjoying this ride and the amazing people I’ve met because of it. I’m insanely lucky and grateful to everyone. I may not have any budget, but I’m the richest man in the universe because of all of you guys!

Another factor is I’m getting older…and writing scripts, building sets, directing, filming, acting, and editing are exhausting. I love it, but I’m no spring chicken anymore. This one-man army needs a rest at some point. And I’ve been creating non-Trek projects, some already filmed, others just written that I want to finish as well.

But, having said all of that, I believe I’ll always be doing something creative.Trek has been with me since I did my first one back in 1992. And the love of that universe has never gone away. I’m sure there are more stories to tell in the final frontier still.