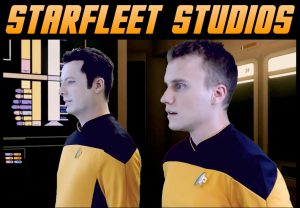 There’s some bad news and some good news for STARFLEET STUDIOS (based in Iowa–not to be confused with STARBASE STUDIOS, which is moving from Oklahoma City to Arkansas…more on that in an upcoming blog).  The bad news has to do with their planned new fan film, THE TNG PROJECT (working title), which launched a Kickstarter in late October attempting to raise $11,000.

They ended up raising only 1% of that amount (the campaign finished with $131 total, which means it failed to fund and no money will be collected from supporters).  Show-runner DAVID WHITNEY told me earlier this week:

Frankly I did not expect the TNG project to succeed. I did not do a great job for the videos. I had no cast interviews, and did not groom the fans. But I wanted to give TNG fans something.

One of the reasons for the lackluster effort came because, during the Kickstarter campaign, the main actor for the project, who was set to play Data, became unavailable as his acting career has begun to take off.  So rather than pushing hard for donations for a project that was now lacking a main character, David Whitney simply let the campaign close, unfunded.

But not all is bad news in the universe of Starfleet Studios!  David also told me the following:

…[T]hat [TNG] project, and the characters within, are being folded into the next Raven film. This is essentially Voyager Continues. Since I need to ditch the name StarTrekRaven.com, look for a new website soon too…besides starfleetstudios.com.

Years ago, Starfleet Studios began work on a project that David planned to call Voyager Continues.  But the project eventually took a back seat and was never completed.  Instead, Starfleet Studios recently released not just one but two fan films: His Name Is Mudd (the premiere production of the new Federation Files “fanchise”–I just made that word up!) and Star Trek: Raven.  The latter film was actually labeled Raven: Voyager Continues – A Star Trek Fan Film when it got posted to YouTube.  But the opening credits still show the original title. 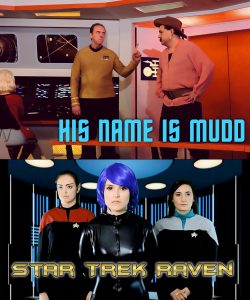 Apparently, Voyager Continues will be the newest ongoing fan series from Starfleet Studios.  (Whether or not CBS and Paramount will approve of an ongoing fan series that follows all of the fan film guidelines except the “no ongoing series” rule is anyone’s guess at this point.)

Voyager Continues will feature some TNG and VOY era ships and cast. Beginning soon will be a series of interviews of the new cast and some more info about the show. I want the fans to get to know these folks, and to show that they indeed can act, despite the limited time we had to make Raven.

I’m not going to rush it.

Derelict is a Voyager film and takes place after Seven of Nine has been on board for a little while. Finding the people to play this scene has taken years, frankly, and I’m very fortunate to be in this situation.  It’s a simple story and is meant to showcase these two new actors to Starfleet Studios plus the script and the CGI. I believe fans will be shocked at the level in quality CGI and camera improvement from Raven and His Name Is Mudd.

The CGI is from a known guy, and I may have some shots as early as next week to show. I am building the set this time, so no green screen…thank goodness! This set will be used not only for this film, but for at least two others, provided it looks good. But I can’t share those yet. The consoles are from Stargate: Atlantis, by the way. 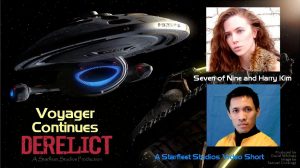 After David’s not-so-stellar initial experience with Kickstarter, I asked him if Voyager Continues would have a crowd-funding campaign of its own, and if so, would he use Kickstarter again, or switch to Indiegogo or GoFundme…

I intend to use IndieGoGo for Raven 2 (not the title, just a bookmark).

I’m making “Derelict” completely out of pocket.  If this quality jump does not get the fans’ interest, then I’ll give up caring and make more films despite their enthusiasm…because I loved Voyager; it is my favorite incarnation of Star Trek.

And finally, I asked how long it would be until things get going on actual production for his new series…

I’m hoping to begin shooting Derelict in December and Raven 2 in February.