Fan Film Friday – STARBASE STUDIOS is on the move… CAN YOU HELP??? 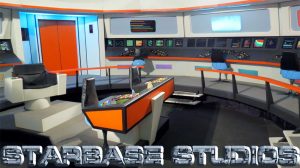 In past years, crowd-funding campaigns for fan films have helped to cover the cost of set construction, 3D visual effects and post-production, studio build-outs, and any number of costs associated with filming.

But now your much-needed donations can help pay for…

Actually, this is pretty serious, and it could effect multiple fan films!  So get ready to take out that credit card or Paypal login, ’cause you’re really gonna want to help on this one, folks!

For five years, STARBASE STUDIOS has been living rent-free in half of a warehouse near Oklahoma City.  Inside, they managed to rebuild the amazing TOS bridge set that had been left to rot after being used in the second episode of Starship Exeter.  (You can read the story of that bridge set’s original construction here and its reconstruction here.)  It remains one of the only TOS bridge replicas that is a full 360-degree set!

During that time, the folks at Starbase Studios also build a transporter room set, a two-bed sickbay (not enough space for the third medical bed), and most recently, a briefing room set.  Multiple fan films and series have now shot there, including:

And even more are planning to…assuming there’s still some place to film!  Y’see, the landlord of the warehouse has decided to sell the property.  And while you might think that placing a listing that says: “The only Star Trek TOS bridge set in 1,000 miles!” might raise the property value a bit, the truth is…not so much.  So the Starbase Studios guys have been given a short period of time to move themselves out.  The big questions now are: where and how?

The where has been narrowed down to two possible destinations.  One is still pretty local to the OKC area while the other is in neighboring Arkansas.  It’s not known (by me, at least) if either or both of these locations is offering free or discounted rent, but if one is, then it’s probably the front-runner.  (I know one studio-runner who signed a three-year lease in Valencia, CA who will attest to how quickly rent can suck away your cash reserve…right AP?)

The how is moving vans and movers…and fuel for the trucks if it’s going to be a long haul.  There will be volunteers to help disassemble the sets and assemble them again at the new location.  But properly wrapping the securing the precious set pieces for travel…that is going to require professionals.  And of course, big-hauling semis…well, that’s gotta be paid for, too.

AND THAT’S WHERE THE REST OF US (THAT MEANS YOU!) COME IN!!!

Starbase Studios has set up a GoFundMe Page trying to raise $3,500 for moving expenses.  Go there RIGHT NOW and try to give at least a little something–$5, $10, $20 (I gave $25 myself)–and don’t wait!  These guys don’t have a lot of time, and once it’s moving day, they need those funds to pay the movers.

Seriously, if you’ve been looking for that perfect crowdfunding campaign that’s worthy of your hard-earned shekel, this one is it!  There’s no other studio out there making itself openly available to fan films needing TOS sets.  James Cawley’s Retro Studios in Ticonderoga, New York, is now an officially licensed set tour and not being offered to fan films at the moment (unless I missed a memo).  The Star Trek Continues sets in Kingsland, Georgia are now being used exclusively for that series since Starship Farragut wrapped its production.  And Ares Studios (or Industry Studios) in southern California has a bridge set that is still under construction plus a minor multi-million-dollar lawsuit to deal with.  So really, Starbase Studios is it.

Don’t let them go gently into that good night!

You can help them move their amazing sets into a new location with amenities that they’ve never had before…like heat and air conditioning, running water, maybe even a toilet!  Think of all they could do with a working bathroom in the actual studio!  (No, seriously, the current location is pretty much just a very large metal box…but the price was right.) 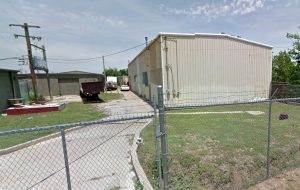 The glamorous outside of Starbase Studios’ soon-to-be former location

Okay, fan film fans, time to step up!  Click on this link to their GoFundMe Page and give what you can.  They’re already a sixth of the way there in less than a week…help them cross the finish line.

The fan film you save could be your own!