Fan Film Friday – STAR TREK: ENTERPRISE II – “The Crossing” and “The Beginning of the End”

Two of the most ambitious and visually stunning Star Trek fan films you will ever see don’t feature a single human actor on the screen. Instead, both fan films star action figures from the Art Asylum line for Star Trek: Enterprise and Star Trek II: The Wrath of Khan (plus a Terminator action figure thrown in for good measure).

One of these fan films took two and a half years to complete…the other took more than eight years! Both of them will blow you away, and you’ll be even more blown away when you go behind-the-scenes to see the meticulous work and craftsmanship that went into each one.

JÜRGEN KAISER lives in the Bavarian region of German, and he has always loved Star Trek. As a teenager, going to the annual FedCon convention in Augsburg, Germany, he dreamed of one day showing a fan film of his own up on the big screen. In 2005, when Star Trek: Enterprise was canceled, Jürgen decided that the show had ended too soon. He wanted to see more of the crew of NX-01. And if Paramount Studios wasn’t going to oblige, then this 24-year-old living in Schweinfurt was going to have to do it himself!

Interestingly enough, Jürgen wasn’t an actual Trekkie, per se. He just really liked the Enterprise series and wanted to see more of it. Of course, Paramount had had tens of millions of dollars to spend and access to actors like Scott Bakula and Jolene Blalock. All Jürgen had was a bunch of 7″ and 8″ Art Asylum action figures, some paper, cardboard, scissors, an SLR camera…and a great deal of patience and persistence. 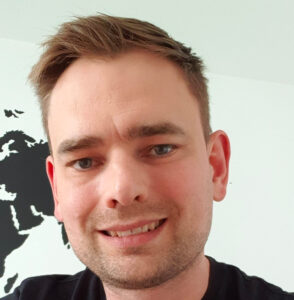 But Jürgen also had a very specific set of skills he had learned and honed from working with his father. Jürgen knew how to make precise, meticulous models—miniatures of larger items that he would study carefully and painstakingly reproduce.

Filmmaking had always inspired Jürgen, and he’d watch countless “making of” special features while growing up, learning a lot. His day job as a measurement specialist of oil channels in automatic transmissions at an automotive supplier did not provide much opportunity for creative expression. So to bring a little balance to his life, Jürgen founded the JK Produktion Stop Motion Studio in 2005 and began what would be a decade-plus-long odyssey creating two amazing stop motion Star Trek fan films.

For those of you who aren’t familiar with stop motion, it’s a demanding form of animation-based filming where inanimate objects and characters are photographed, moved slightly (like a millimeter), and then photographed again. This is repeated approximately 30 times for each second of completed video. The photos are then assembled into scenes by being shown sequentially one after the other. A day of photographing in this way can, if you’re lucky, result in the completion of 2 seconds of your film by the time you’re done.

Jürgen’s very first attempt at a stop-motion movie came way back in 1998 when he was just 17 years old. Although it was never completed, Jürgen spent more than six months modeling and learned a lot. Seven years later, he was ready to try again, this time with a story of the NX-01 Enterprise crew set shortly after the end of the season three story arc with the Xindi.

By July of 2007, Jürgen had been working on this project for nearly two years and had about three-quarters filmed. He’d constructed eight different models already, but he still needed to tackle the most challenging set: the bridge. His goal was to finish the entire film and debut it at FedCon XVII the following April. It was going to be close!

Unfortunately, Jürgen didn’t make it. The bridge took nearly six months to complete, finishing in late November. All of the stop-motion photos were finally taken by the end of March 2008, but there simply wasn’t enough time to finish the half-hour fan film in the few weeks remaining before FedCon…although Jürgen did manage to release the following trailer (calling the project Enterprise: The New Generation):

On June 20, 2008, Jürgen finally uploaded his half-hour long fan film to YouTube. It was originally titled Der Zeitspiegel (“The Time Mirror”) and was spoken entirely in German by untrained voice-actors. The visual effects were pretty basic by today’s standards but impressive back in 2008.

The story had the NX-o1 Enterprise testing a new engine and being flung into a void between universes and encountering some unexpected but familiar TOS action figures. And speaking of action figures, the Captain’s Log had to explain that Dr. Phlox and Hoshi Sato were on temporary leave from the Enterprise…although in reality, those characters were never turned into standard uniform action figures by Art Asylum (and Reed and Mayweather did not come in variants wearing EV suits).

Jürgen finally got the chance to debut his fan film at FedCon in 2009. And that following Christmas, non-German speaking fans received a surprise gift when a dubbed English version was uploaded featuring the voices of many members of the STAR TREK: NEW VOYAGES cast, thanks to the support of Star Trek: New Voyages Germany.

And this was not some hastily-thrown-together translation project either. Peter Goundrill of Limited Faith Productions in Great Britain assembled a full team to create a new and improved fan film. Stephan Mittelstaß provided the actual English translation, and then Rex Duis handled the English adaptation. Rex also provided the voice of Malcolm Reeds which, thanks to Rex’s British accent, is almost indistinguishable from that of Star Trek: Enterprise actor Dominic Keating.

The other voices were all supplied by actors and extras who had appeared on the fan series Star Trek: New Voyages, including Paul R. Sieber, Ron Boyd, Meghan King Johnson, Ralph M. Miller, Jeffrey Quinn, Charles Root, Julienne Irons, and even Vic Mignogna (this was years before his departure from that series to start up Star Trek Continues).

In addition to dubbing over the voices (which was not awkward to watch, as the action figures’ mouths don’t ever move), the original film was also cropped from its original 4:3 aspect ratio to a widescreen format. The newly dubbed version version was renamed STAR TREK: ENTERPRISE – CROSSROADS and posted to YouTube in June of 2009…

About the same time, Jürgen was feeling “bored” as he told this German news service. So he decided to make a sequel—but not just any sequel. Armed with a 53-page screenplay co-written with two friends, Stephan Mittelstrass and Sabrina Heuer-Diakow, Jürgen set out this time to make a full hour-long film with real German actors, improved camera equipment, an original score, and 18 and a half minutes of stunningly beautiful VFX footage designed by a professional animator joined by 15 different CGI modelers and effects specialists.

All told, this sequel project, titled STAR TREK: ENTERPRISE II – DER ANFANG VOM ENDE (“The Beginning of the End”) would take Jürgen and his team of nearly 40 people SEVEN YEARS to complete! A good chunk of that time was spent by Jürgen himself, who told Deutsche Welle that for every second of “live action” footage of the action figures, it would take him about one hour. Minus the VFX, there’s about 35 minutes of stop-motion….so doing the math, that’s more than 2,000 hours of painstaking labor!

And that doesn’t include the time it took to make all of the new miniature set models. Jürgen would fix up his bridge and ready room set (which had been partially destroyed for the final Red Empire attack scenes for his first film). He would also recreate other sets with his usual meticulous attention to detail, including the infirmary, the engine room, the interior of the shuttlepod, crew quarters, and a portion of the bridge from the movie-era USS Enterprise. It took Jürgen about two months to make all of the set models. And if you want to see just how intricate his work was, take a look as these three photo compilation videos that he did…

Once the sets were built, digital stop-motion photography with a Canon 50D SLR camera took 220 days…moving the characters millimeters at a time and scrubbing down the sets to the smallest detail.

Unlike the prequel, this new fan film would be produced in full HD with a widescreen aspect ratio. The sequel would also feature something else not available previously: moving mouths! Using an application called Stop Motion Pro (the same software used in the production of Wallace & Gromit), Jürgen was able to paint individual frames of the animations to make the characters’ mouths move and even sync to the voices of the actors. You can see what the frames looked like before many of the special effects were added—including mouth movements, green screen compositing, and animating console displays—in this cool side-by-side video…

Speaking of voice-overs, the cast for this film was assembled by Sabrina Heuer-Diakow, herself a voice-over actress in Germany who provided the lines for T’Pol in Der Anfang vom Ende. Sabrina reached out to fellow voice-over actors from across Germany to help with the project and directed them all via Skype, providing for a very professional-sounding production…assuming you understand German, of course.

Dennis Schuster composed some amazing music, and as I said, over a dozen CGI modelers and animators contributed to the final VFX. These were the days before the fan film guidelines existed, so there was no moratorium on paying people to work on your fan film. That said, Jürgen has never said whether or not anyone was ever paid. He did reveal, however (in a number of media interviews), that over the seven and a half years(!!!) that it took to finish Der Anfang vom Ende, he spent enough to purchase a mid-sized car…and none of it was ever crowd-funded!

Anfang vom Ende made its debut in May 2016 where it had all started for Jürgen: at Fedcon at the Maritim Hotel in Bonn, Germany in front of thousands of thrilled attendees. This time, the world premiere happened at FedCon first, with the fan film being uploaded to YouTube the following month.

Since then, Star Trek: Enterprise II – Anfang vom Ende has been viewed more than one million times on YouTube. It has won awards and remains the longest stop-motion Star Trek fan film ever created (with its prequel being the second-longest). Unlike Der Zeitspiegel/Crossroads, Anfang vom Ende has not been dubbed into an English version. But subtitles are available on YouTube, and you shouldn’t let a little extra reading stop you from enjoying a work of meticulous cinematic art. And it’s not just the stop-motion and amazing miniature sets. The VFX shots are breathtakingly beautiful. Indeed, they’ve been compiled into a single VFX-only highlight reel of 18 and a half minutes.

But really, you want to watch the full film, trust me…