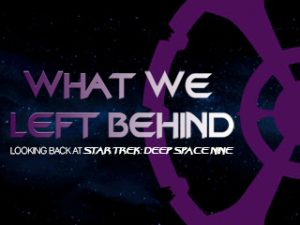 Stop me if you’ve heard this one before. So there’s this fan film project that’s going to feature veteran Star Trek actors and production crew, and it’s going to be presented in documentary format. Although people are excited about the project even before the crowd-funding campaign begins, the show-runners are nevertheless blown away when donations blast through the initial goal and reach nearly $650,000. Emboldened by this unexpected abundance of production funding, the show-runners decide to expand the scope of the project far beyond what was initially planned, and a year later, they go back to the donors and fans to ask for even more money. But then stuff happens, and the release date gets delayed…and then delayed again. Nope, not Axanar. This same sequence of events happened with the ambitious Star Trek: Deep Space Nine documentary WHAT WE LEFT BEHIND, directed by ADAM NIMOY. Crowd-funded in early 2017 with more than $647,000, the original release date was estimated as February 2018. But by April, with no documentary in sight, show-runner IRA BEHR updated fans with a written message that I featured in a Fan Film Factor blog titled “So where’s that darn DEEP SPACE NINE documentary???” Ira didn’t make excuses so much as provide reasons why things were taking so long…including the fact that there were over 100 hours of new interviews with cast and crew to go through, plus fan submissions, archival materials, animations, audition tapes, convention footage and more than 170 broadcast episodes…all of which needed to fit into a final documentary that was no longer than a few hours! Plus, they were remastering some of the original standard definition footage into beautiful high definition footage. By September, there was still no completed documentary, and Ira posted yet another update…this time as a video and asking for even MORE money! Why would he “tap the well” again so late in the game?

As you can see above, the quality difference between the original standard def video and the remastered high def video is pretty staggering!  And Ira thought so, too.  The problem was that remastering is a long, complex, and EXPENSIVE process—and they could only afford to remaster about 5 minutes out of the total 20 minutes of clips that they would be using for the documentary.  The other 15 minutes looked…well…kinda “blah” in comparison. Ira wanted to do this right and make the documentary as good as it could be.  After all, this would likely be the only time that any DS9 episodes would be remastered into HD, as CBS is very unlikely to fund another special edition Blu-ray collection after the disappointing sales of the seven seasons of remastered Next Generation episodes.  So this was it for remastering DS9…and 5 minutes out of 20 minutes just seemed to be falling frustratingly short. So Ira went back to the fans and offered them a little something in exchange for a little something from them.  Anyone donating $50 would receive a special challenge coin—and for $500, the donor’s name would appear superimposed over the HD footage (as shown in the above image on the right).  Pretty cool, huh? The documentary was screened in front of VIP audiences in Los Angeles, New York, and London during October…to very positive reviews.  But not all of the Ds9 footage had been remastered yet.  And although the last update from Ira promised a release to the donors (and the general public) of the full documentary before the end of 2018, it looks like that will not happen (unless someone has the Orb of Time lying around). Realizing that this missed deadline would likely rile at least some of the nearly-10,000 backers, Ira went to YouTube to post the following “mea culpa” video message… Personally, I’m not irked at all.  As I like to say, “Shat happens.”  It’s not like I’m waiting around with a stopwatch or anything.  When I donate to a crowd-funder, it’s with the hope that the finished product comes out as good as possible.  So I applaud Ira for being honest with the donors and taking responsibility for his decision while also standing behind it.  I’m glad to hear that we’ll be getting more remastered HD footage, and I for one am more than willing to wait a little longer for the finished product.